After a terrific breakfast at Pike’s Waterfront Lodge, I was ready to get out on a snowy day and explore Fairbanks.  I confess, I had little recollection of the schedule,, so this first day was filled with diverse sightseeing surprises.

Fairbanks is Alaska’s second-largest city with a population of about 30,000.  Coming from the Los Angeles area, this doesn’t sound large.  Nonetheless, I was always confused as to direction and distance.  I thought we traveled quite a stretch, but it probably was about four miles.  To my surprise we arrived at the Fountainhead Antique Auto Museum.  Well, why not?

The temperature converts to 28F, a somewhat nippy day but warm enough for falling snow.  The door is on the right, and yes, that blue stuff is ice.  I wore my cleats!  The exterior may be bare, but once inside, ah, the magic happens.

Bright, shiny, and oh so appealing!

I could certainly write an entire post about Fountainhead and its gorgeous cars, but I’ll rein in my enthusiasm.  This is a first-class operation, with some of the earliest examples of the auto industry.  My blog’s title image gives just a hint of the amazing collection.  I never heard of a Waltham or a Franklin; the museum has these early cars.  It also features mannequins dressed in period costumes.  Some of the gowns for the 1930s could compete on the red carpet today; they are that stunning.   One of the oddest vehicles was the 1926 Fordson Snow Moter.

A Fordson tractor converted into a snow machine.

I didn’t recognize the Fordson tractor name, but after doing some research, I learned that it was popular after World War I.  In the mid-1920s, these machines were brought to Alaska and converted to skim along the snow.  The idea was they would pull supplies to Barrow, a distance of over 600 miles.  The Fordson bogged down after completing about 45 miles.  The snow in Alaska was too soft; the heavy machine was built for the dense, wet snow of the Midwest.

After lunch in Fairbanks, we headed out of town again, this time to Aurora Point, where we were going dog sledding!  Yay, this was on my bucket list! 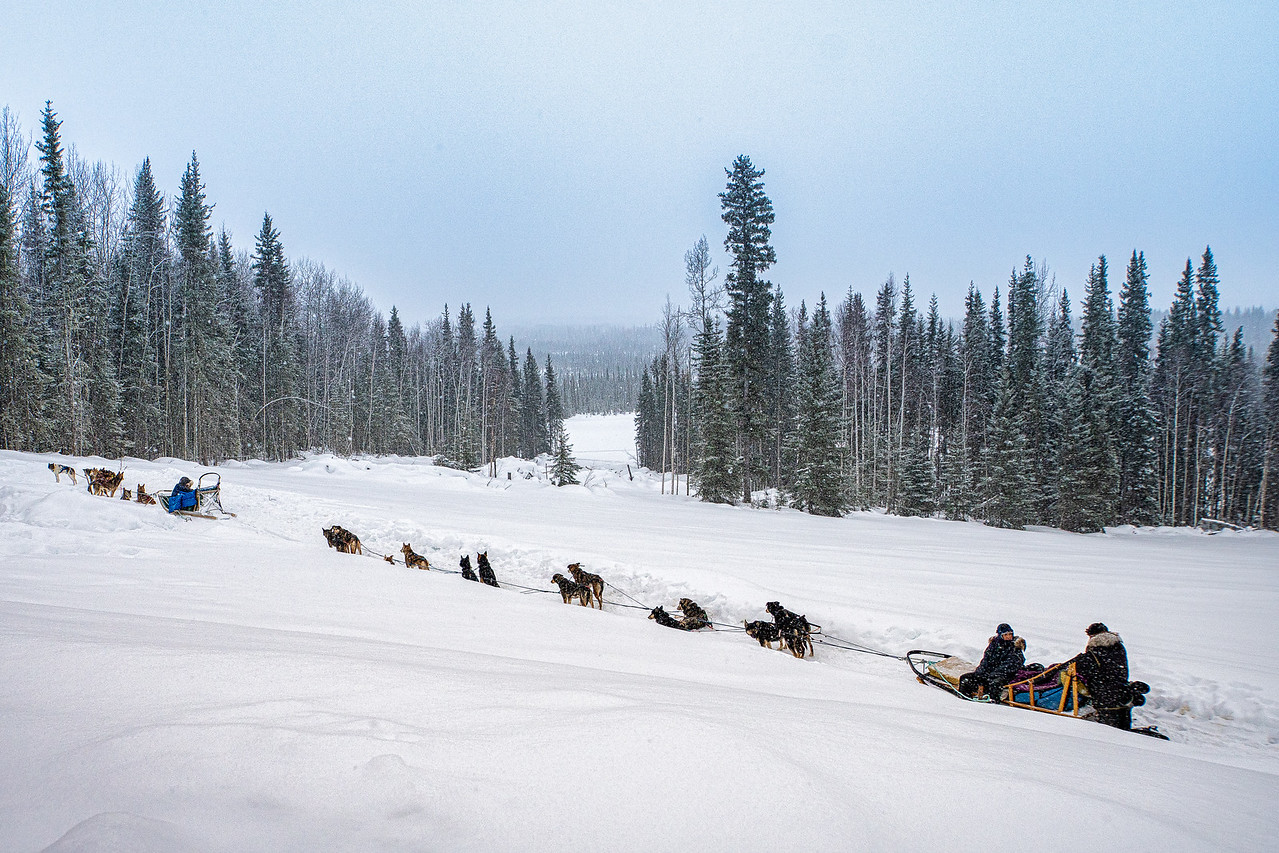 I’m not sure how many sleds were running, but it took about an hour for everyone to have a ride.  For the record, there isn’t much padding on that sled, and there are a lot of bumps on the trail.  Still, I thought it was terrific.  Can I go again?

The view from the sled. Photo by Halley Sanchez

As you can tell, it was snowing.  That didn’t dampen my enthusiasm.  My advice? If you get a chance to go mushing, take it!

The scheduled daily events ended with the dog sled ride, but our bus driver suggested visiting the ice sculptures at the fairgrounds.  Why not?

The Battle, by Tator, Cox, Miller, and Stahl (Multi-Block Classic)

There were dozens of these massive sculptures tucked away in the forest.  The event involves artists from several countries, and even has category for young people just beginning in the field.  The base has color because there are lights.  I think they’re positioned behind the sculpture.  One drawback during our visit was the snowfall.  The statues were covered with the stuff!

Alaska in winter is fantastic; the snow pleases me no end.  To see more images from my first day in Fairbanks, please click here.