Yes, I just wrote a post about the Field Museum and its dinosaurs, but this museum is a big place with plenty to discover.  I don’t know how one is supposed to see everything in one visit.  My daughter and I couldn’t do it.  We did manage to dash through some highlights.

The image above refers to the South Pacific islands, atolls like the Marshall Islands.  I used to think that such places were a paradise, but after my Field Museum visit, I know differently. Atolls are far from idyllic.  They don’t rise much above sea level.  If the waves are fierce, the ocean floods the island and washes away almost every living thing.  It doesn’t sound like a good place to build a hut and plant a little garden.

Speaking of gardens, I neglected to mention the hanging gardens in the Stanley Field Hall.  These huge structures are called Plant Clouds. 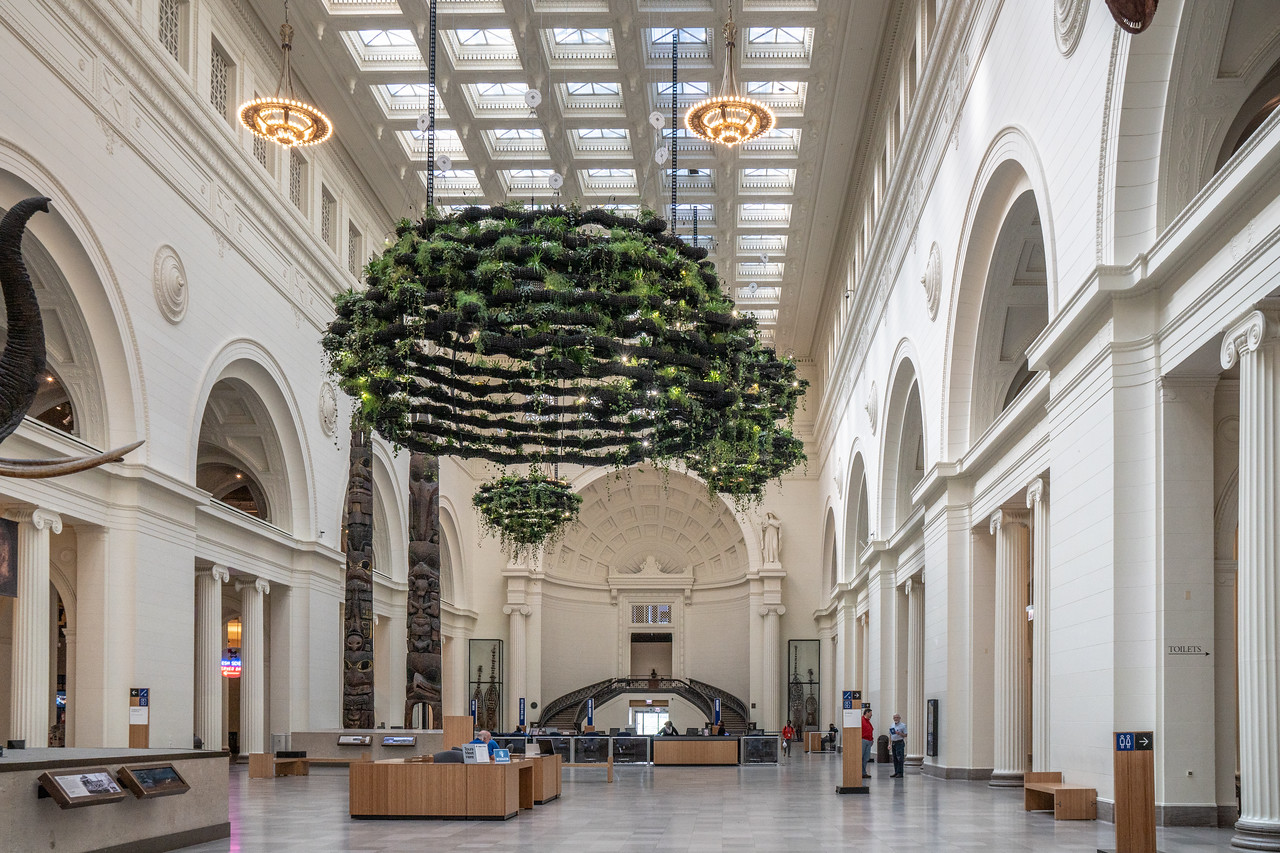 The “floating” frames which hold the live plants are created using 3-D printers.  The gardens were added to the hall in 2018 as part of the 125th-anniversary renovation.

New Zealand at the Field Museum

Now, that I’ve mentioned the plants, I’ll return to the atolls and my exploration of the exhibit called “Travel the Pacific.”  The main attraction for me was the Maori Meeting House.

According to the brochure, Ruatepupuke brought the art of woodcarving to the world.  If the carving on the meeting house is any indication, I believe it.  By the way, Ruatepupuke’s face is at the top of the structure, built in 1881 in New Zealand.    Not many Maori buildings reside outside the country.  This rare exception is the best example of its type outside New Zealand.  I enjoyed spending some time here.

Mammals Then and Now

Time, alas, wasn’t on our side.  My daughter and I were trying to see as much as possible in what remained of the day.  We spent far too much time chasing dinosaurs to see all the musuem.  We skipped many exhibits in favor of things we couldn’t see in Los Angeles.  Oddly enough, we stumbled across several mammoths.  The La Brea Tar Pits have several mammoths!  I didn’t need to see mammoths in Chicago!  However, alongside one giant fellow was this megaloceros. 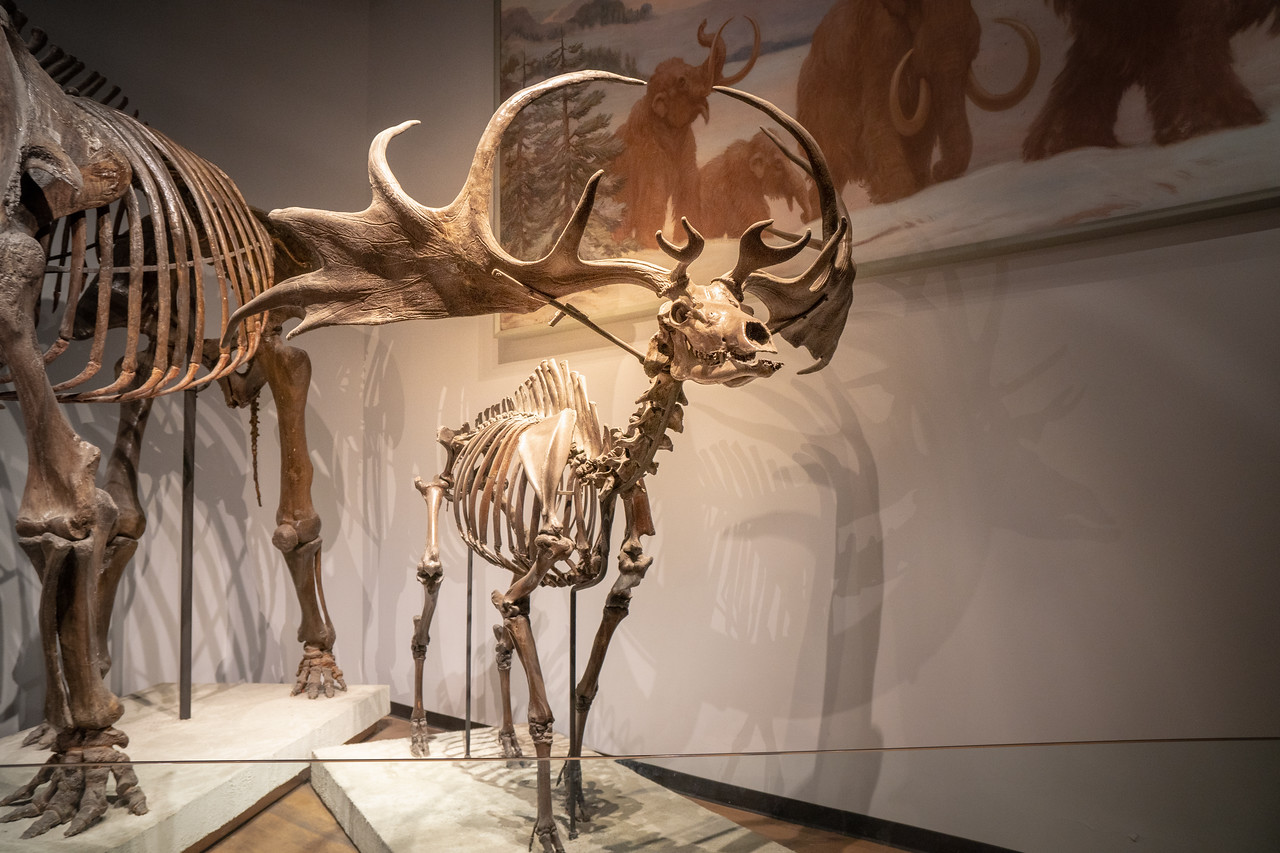 Megaloceros in the Field Museum

How could I resist a photo of something with antlers that big?  Megaloceros looks something like a giant deer or elk.  Most were large, measuring about six feet at the withers.

Contrast the megaloceros with this group of antelope. 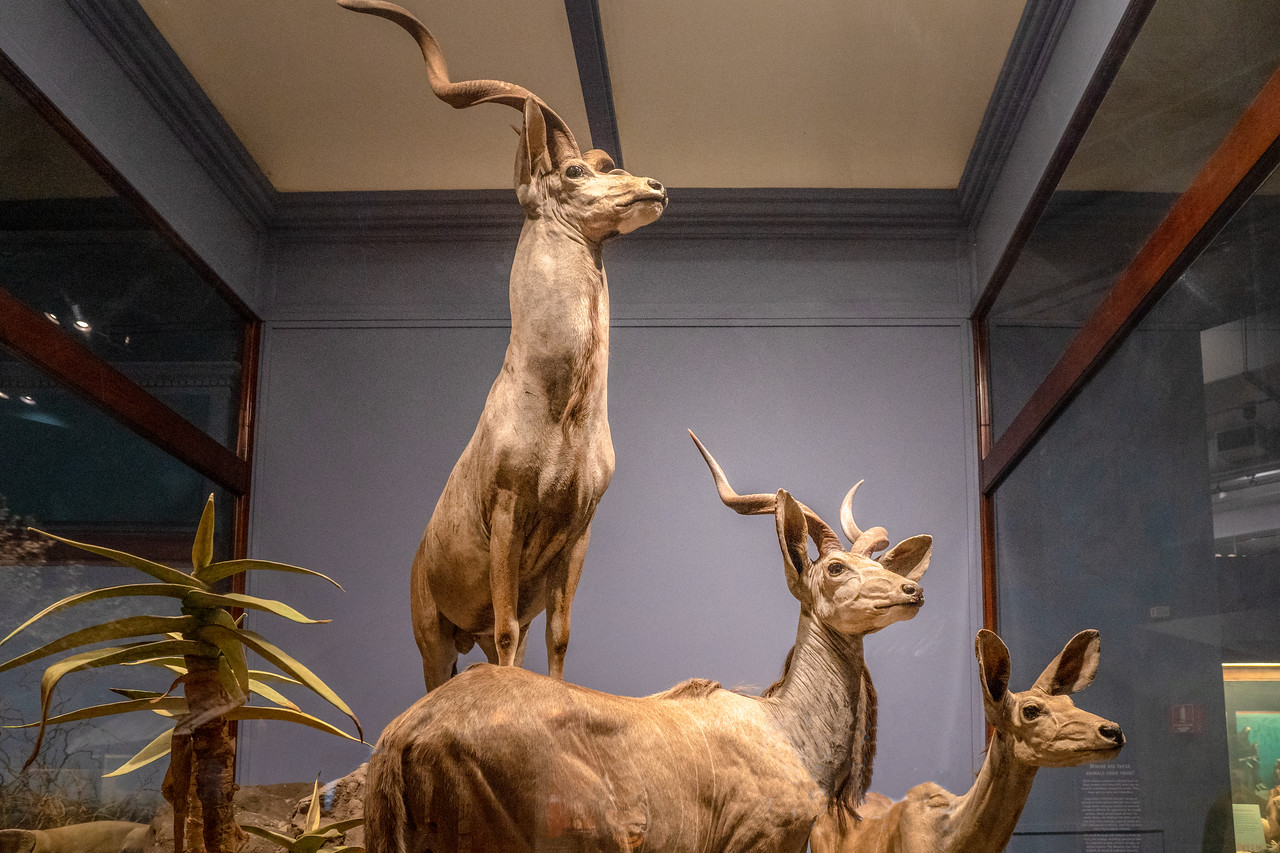 Antelope in the Mammal section of the Field Museum

I don’t know what the above animals are; there are many kinds of antelope.  I thought it interesting that deer are still with us even though the larger type, like the megaloceros, isn’t.

My goal was to see Ruatepupuke; my daughter had plans to visit the Tsavo Lions. 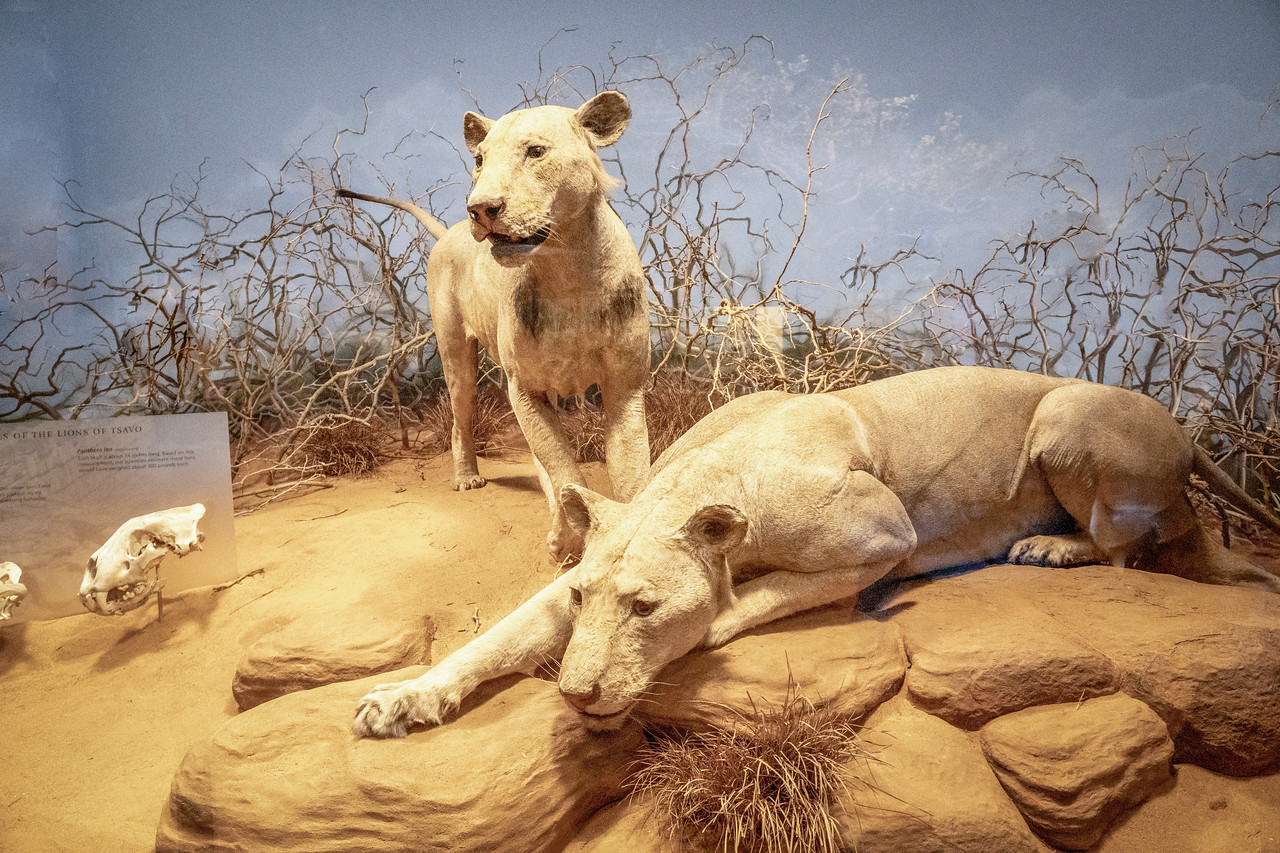 The story of these lions is a grizzly tale.  In 1898, these man-eaters preyed on the workers building the Kenya-Uganda Railway.  The reported number of deaths was high, about 100 or more. Science now estimates it at a more realistic 35. Nonetheless, these two were fierce.  I won’t tell the entire story.  I don’t want to spoil the ending or your day at the museum.  Be sure to stop by the Mammals in the Rice Gallery on the main level and see the lions!

The Field Museum is a marvelous place.  I wish it were closer!  Next time I’m in Chicago, I’m going to allow at least two days to see this fantastic museum.  To see more images from the Field Museum, please click here.