When my daughter and I heard that the Star Wars convention would be in Chicago, our first thought was, The Field Museum!  Finally, we would get to see Sue, the most famous of the Field Museum dinosaurs.

The museum is located on the museum campus along Lake Michigan.  As you can see, Sue still holds pride of place on the banner. 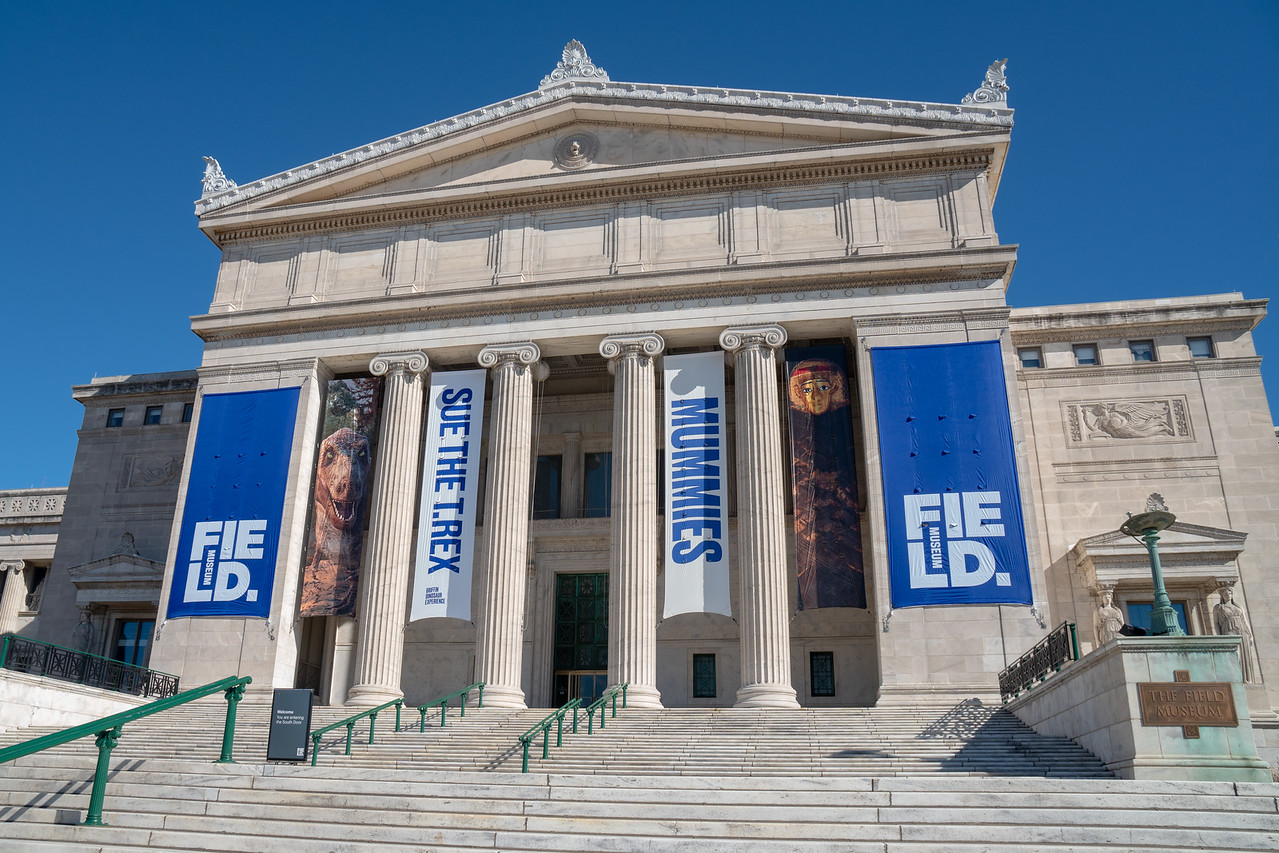 Entrance to the Field Museum, Chicago

Sue has been on display at the museum since May 2000.  We waited a long time to see her.

Unbeknownst to us, Sue no longer stands in the main hall.   A new, bigger Field Museum dinosaur now has that honor.  His name is Maximo, and he’s a titanosaur.  (Don’t feel bad.  I’ve never heard of that one either.) 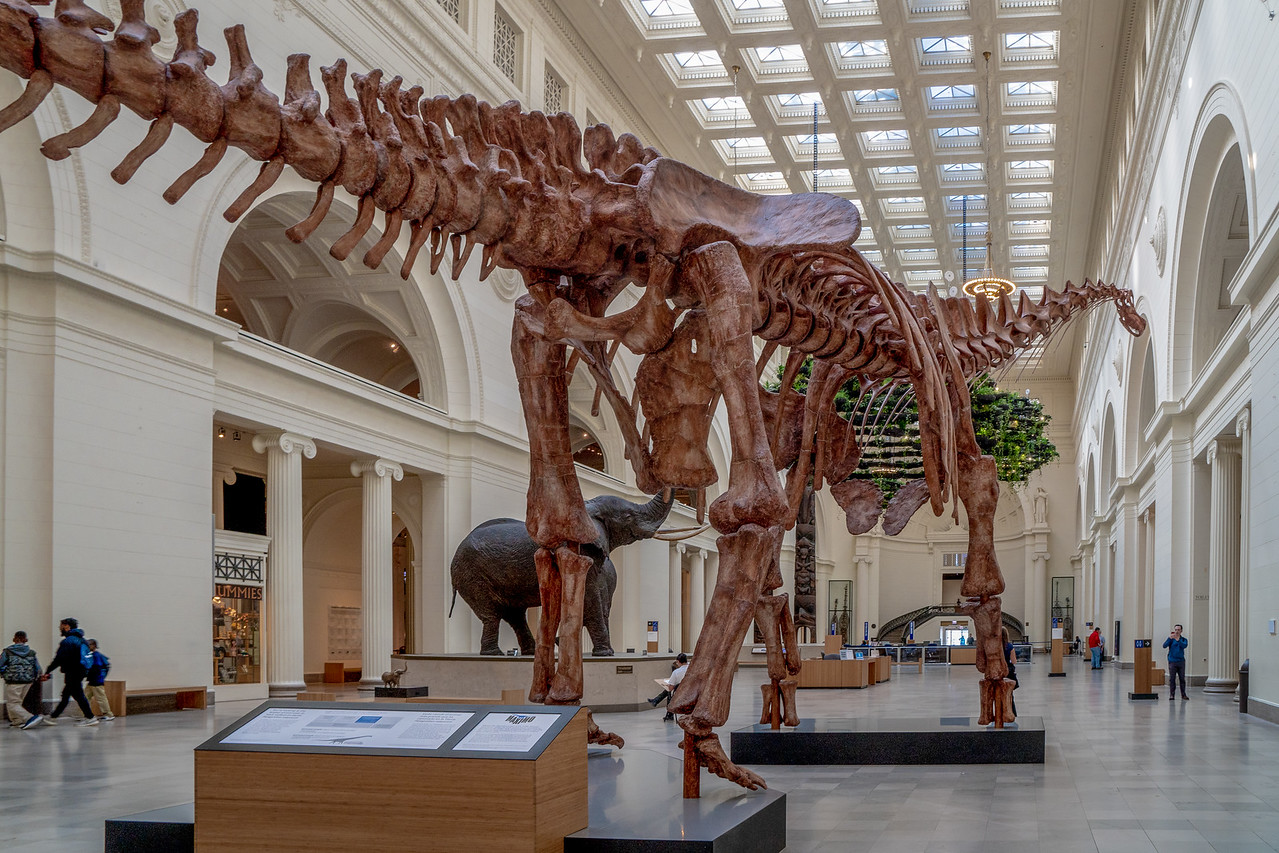 I spent a lot of time walking around Maximo trying to fit him into the frame.  He’s a big thing and not too accommodating.  The hall is about three hundred feet long, so Maximo takes up almost half of it.  His head reaches the balcony on the floor above.

I’m sure visitors often use this photo spot for family pictures.  I know my daughter and I had fun with it.

The title of this piece has dinosaurs as a plural, so I’ll leave Maximo in the hall and move on.  There are a lot of Field Museum dinosaurs, and I have to choose between them.  A walk through the museum is a walk back into time.  This dimetrodon is a very old animal which existed about 50 million years before the first dinosaurs appeared. 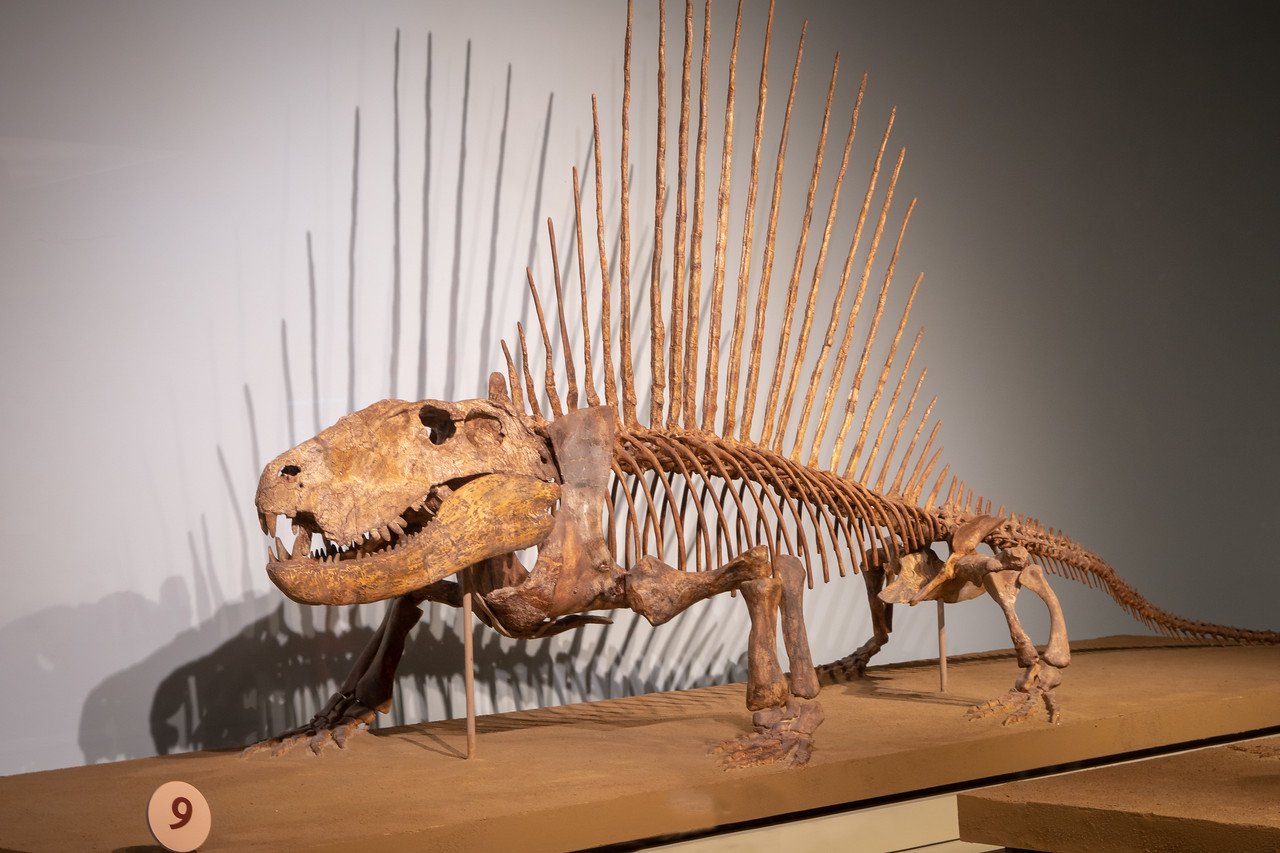 Dimetrodon on display at the Field Museum

I’m include it because it looks like a dinosaur, and it says something about early animals.  Alas, the legs give it away.  Those splayed lizard legs are not right for a dinosaur.  Dinosaurs walked with their legs beneath their hips, not out to the side.

I feel like I’ve been living with raptors since the 1990s.  Jurassic Park didn’t help with its big velociraptors.  The Field Museum has two small(ish) raptors on display. 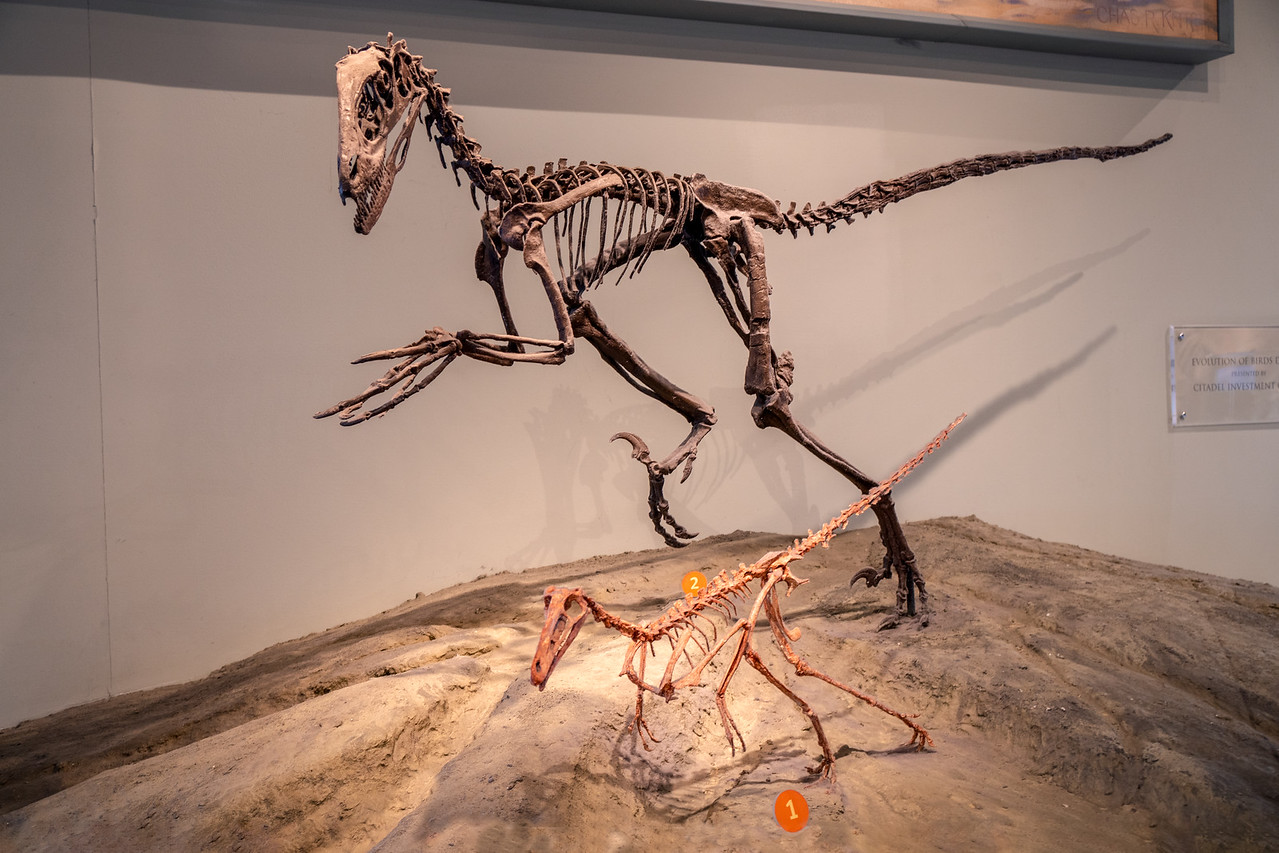 Deinonychus and buitreraptor on display at the Field Museum

For the record, deinonychus was bigger than the small, quick velociraptor, but why spoil the fun of a good movie?

Sue, named after the woman who found her, on display at the Field Museum

Maximo was huge, but Sue looks like she could catch me and do horrible things to me!  I was most surprised by the size of her ribcage.  The belly ribs are new.  She didn’t “wear” them while on display downstairs in the Stanley Field Hall.  With the addition of those bones, she looks gigantic.  I now have a feeling of weight and bulk to this animal.  I wouldn’t want to meet a T-rex.

Oh, and one more thing about Sue: the head on display isn’t her head.

The above image is part of Sue’s head.  It’s on display in another room.  Sue’s nose was squashed when she died and fossilized.  You can see a photo of it in my gallery along with the above image.  I chose this photo because I like the teeth.  The little holes along the teeth suggest that Sue had dental issues.  She may have been in pain when she died.  Poor thing.

I won’t say too much about the dinosaurs at the Field. I’m sure you’ll want to see them for yourself.  This museum was exceptional, so if you do get to Chicago, be sure to allow plenty of time to explore it.