I had read that the season for the flower fields of Lompoc went from April to sometime in the autumn.  I, therefore, timed my visit for May, expecting to see flowers and get some colorful photographs.  Perhaps I was eager to see a new place as well.

Alas, spontaneity can sometimes be a hindrance.  Why?  I was too early!  The flowers weren’t blooming!  Never fear, I had a backup plan. Lompoc is also known for its murals!

I shot eight images, as I sidestepped along the building, shooting every few feet.  I later used Photoshop to stitch the pictures together.  The mural depicts the thriving wine industry in the Santa Barbara region of California.

Murals first came into being in Lompoc in the late 1980s as a way to boost tourism in its Old Town.  The number of murals grew, and word spread.  I had heard about them but never took the time to detour along CA-1 to Lompoc.  I’m so glad I made the trip at last!

I arrived in Old Town late in the afternoon and simply wandered from street to street.  There are official maps, but somehow I missed getting one.  I didn’t have to look too hard to find the art; it’s on every building! 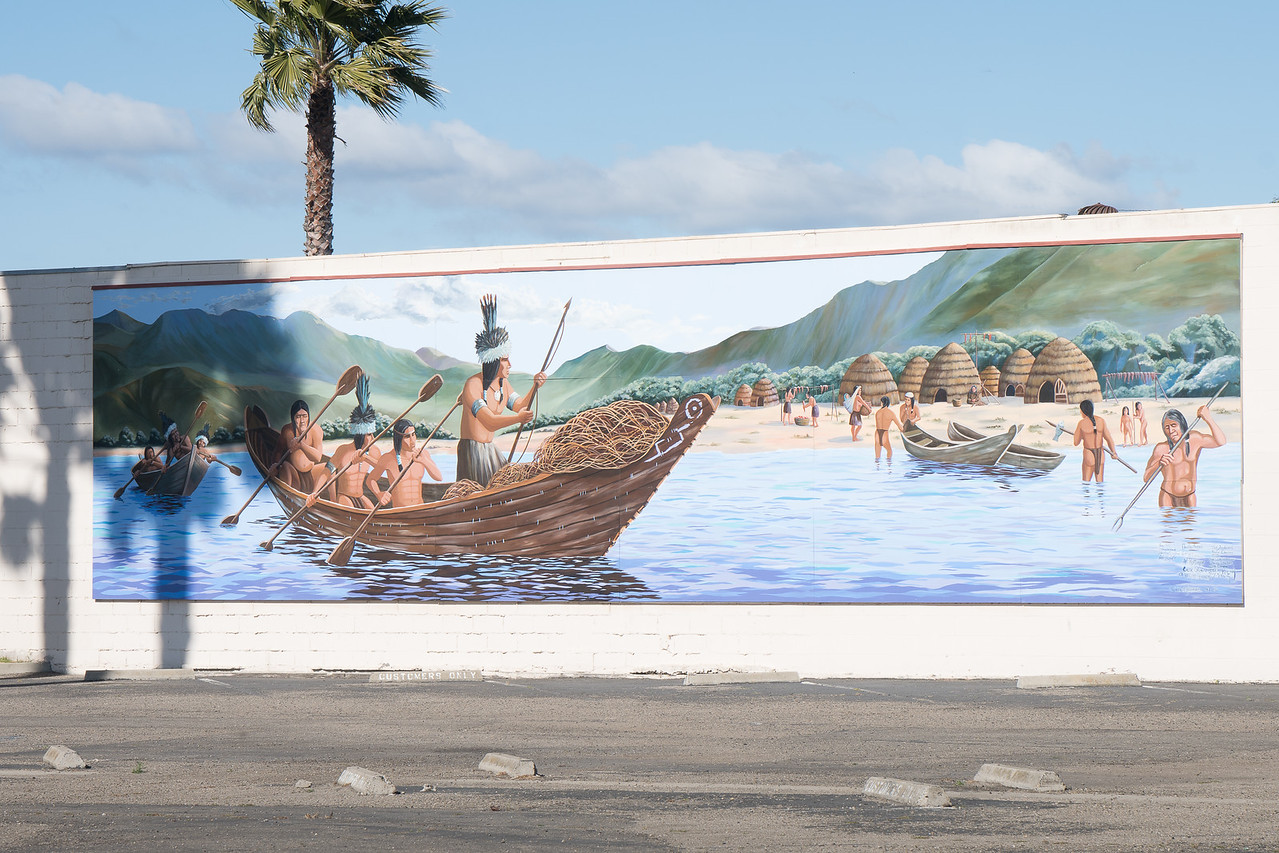 Chumash Indians, a mural from 1992

I’ve included this mural of the Chumash Indians because it’s one of the earlier paintings and it refers to the Native Americans who lived in the Lompoc area for hundreds of years.  As I said, it was late in the day and the palm tree shadows were a bother, but the photo does illustrate my point that the murals are everywhere.  This is on the side of a building, with a parking lot in front of it.  I’m glad I only had to contend with palm trees; a busy afternoon and a full parking lot would be daunting.

Not all the murals relate to Lompoc or its history.  I found this one in a shady section of Art Alley and couldn’t resist including it.

The dinosaur is an Albertosaurus, smaller than a T-rex.  I like the way the artist has it coming right out at us.  I also like those flower boxes.  Art Alley has several of these painted boxes.  Flowers are big in Lompoc!

While I didn’t see the flower fields, I did see a wonderful mural filled with butterflies.

Monarch butterflies migrate along the California coast annually.  This mural celebrates a eucalyptus grove near Vandenberg AFB.  Pismo Beach and Pacific Grove also have famous monarch groves. The photo above works for me because of the flowers blooming in the foreground, in the real field.  As a result, the monarchs seem to be rising up out of the flowers.

There are many murals in Lompoc, most commissioned by the Lompoc Mural Society, but not all.  The goal continues to be to raise civic pride, promote appreciation in our ethnic diversity, and to bring tourism to Lompoc.  I would say that the murals are a success!

To see more images from my walk around Old Town Lompoc, please click here.  By the way, after asking a few folks in town, I learned that Lompoc is pronounced Lom-poke.  Thought you’d like to know.