Visiting an historic home is a great way to spend a day and therefore I opted for the ultimate home visit by going to see Sunnylands.  This was the winter home of Walter H Annenberg and his wife Leonore.  I confess I knew little more about them, other than that he was an ambassodor during the Nixon administration.  I was due for many surprises.

If you are like me and need some remedial information, I’ll try to give you a few facts.  Walter H. Annenberg was a publisher, philanthropist and diplomat.  He and his wife had a home, Inwood, in Philadelphia;  Sunnylands was there winter home. Yes, the family was well-to-do.  They traveled in elite circles.  Visitors to Sunnylands included eight presidents, foreign heads of state, the British royal family, movie stars and other celebrities. 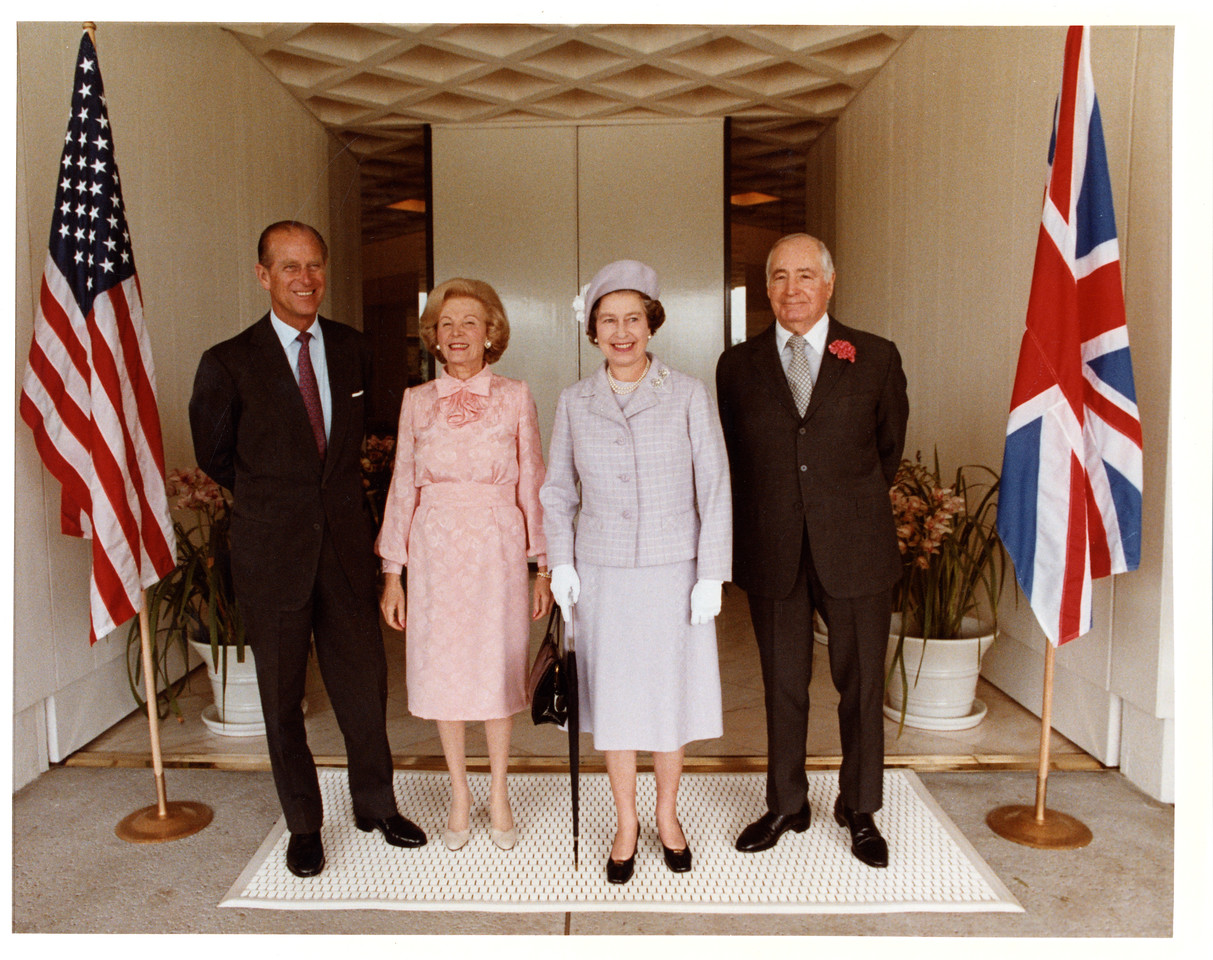 L to R: Prince Phillip, Lee Annenberg, Queen Elizabeth, and Walter Annenberg standing in front of the entrance to the estate house during the Queen’s visit in February 1983. Copyright The Annenberg Foundation Trust at Sunnylands

I like the above photo because it speaks to the special relationship Walter Annenberg had with the royal family as result of his time as ambassador to the Court of St. James.  Walter was also an art collector, specializing in Impressionist and Post-Impressionist paintings.  Many of these he bequeathed to the Metropolitan Museum of Art in New York City.  At the time this caused quite a stir.  According to the New York Times, his was the largest such donation (valued at over $1 billion) to the Impressionist Department in the over fifty years.

I traveled past the palo verde trees and across the golf course in a small shuttle.  Each house tour is small, only about six or seven people at a time.  We were given a few minutes to take some pictures of the outside of the house and the Mexican Column.  This is a fountain, but it wasn’t running during my visit.  I suspect that’s because of California’s recent drought conditions. Sunnylands has done its part to go drought resistant.

Waiting at the entrance. Mexican Column fountain in the foreground

Photos were not permitted inside the house.  I will use those provided by the Annenberg Foundation to illustrate some of the things I saw.  As soon as we went through those double doors we stepped onto pink marble floors!  Pink was Lee Annenberg’s favorite color and one finds it everywhere.  The black external walls, seen in the photo above, extend right into the interior.  I’m told this style is called Mid-Century Modern.  The emphasis is on large open spaces, floor to ceiling windows, and a tendency to meld the indoors with the outside environment.  The following photo of the atrium illustrates what I first saw as I entered.

The sculpture in the center of the atrium is an original casting of Eve, by Auguste Rodin, 1881. Photo by Graydon Wood.    Copyright The Annenberg Foundation Trust at Sunnylands.

Notice the pink flowers surrounding the pool.  The walls are painted celadon green.  While the original paintings have all been sent to the Met, digital reproductions hang in original gilt frames.

Our tour progressed from room to room.  We saw Walter’s office, filled with photos and memorabilia.  There was a collection of Christmas cards from the Queen Mother. Each had a photo of her and a message.  She looked charming; I just love that little head tilt.  I’ll include another photo to to give you some idea of the place. 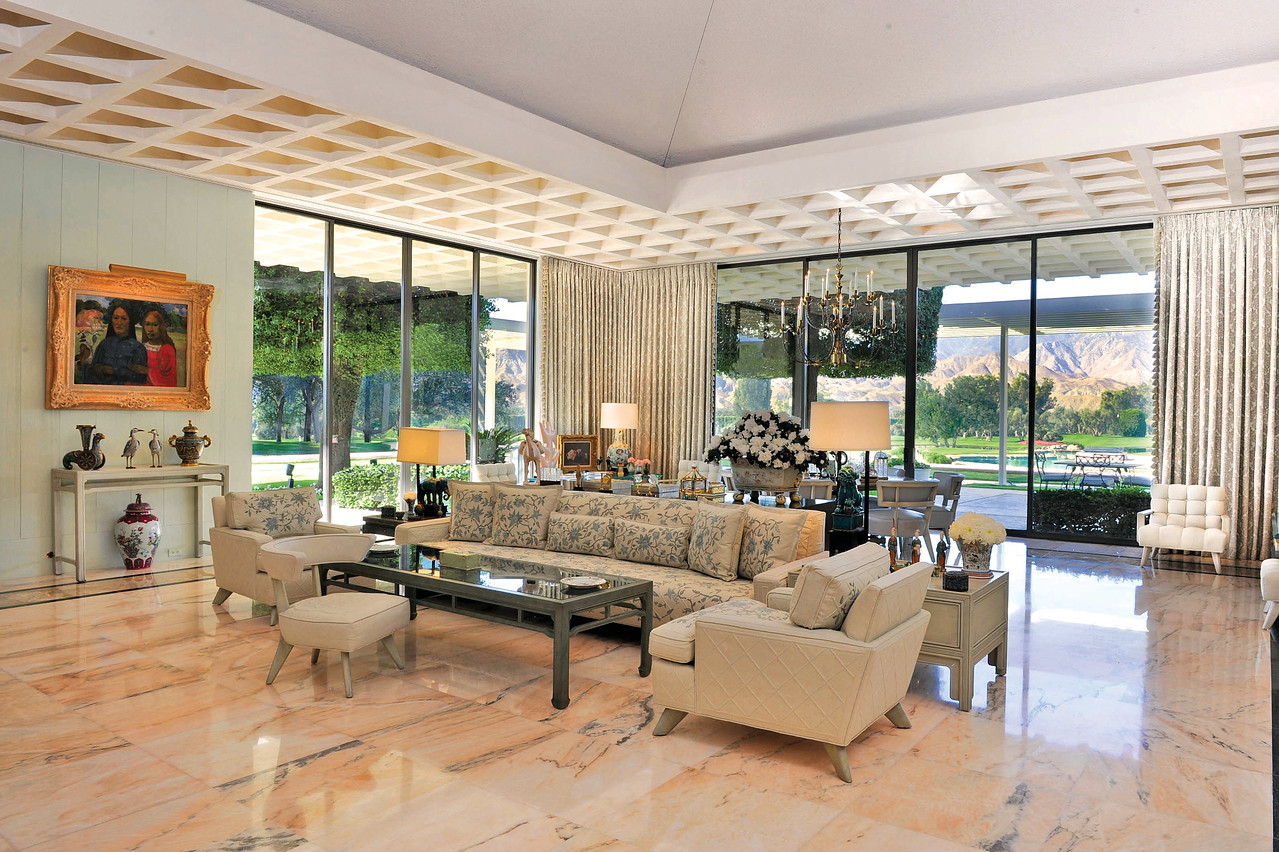 The above is only about half of the room, but it does give one some idea of the whole.  I believe the guide said three weddings were performed here, including one for Frank Sinatra.  Well, of course. What did I expect?

After seeing a few rooms, we wandered outside.  The view was tremendous.  I also had a chance to take a couple photos. 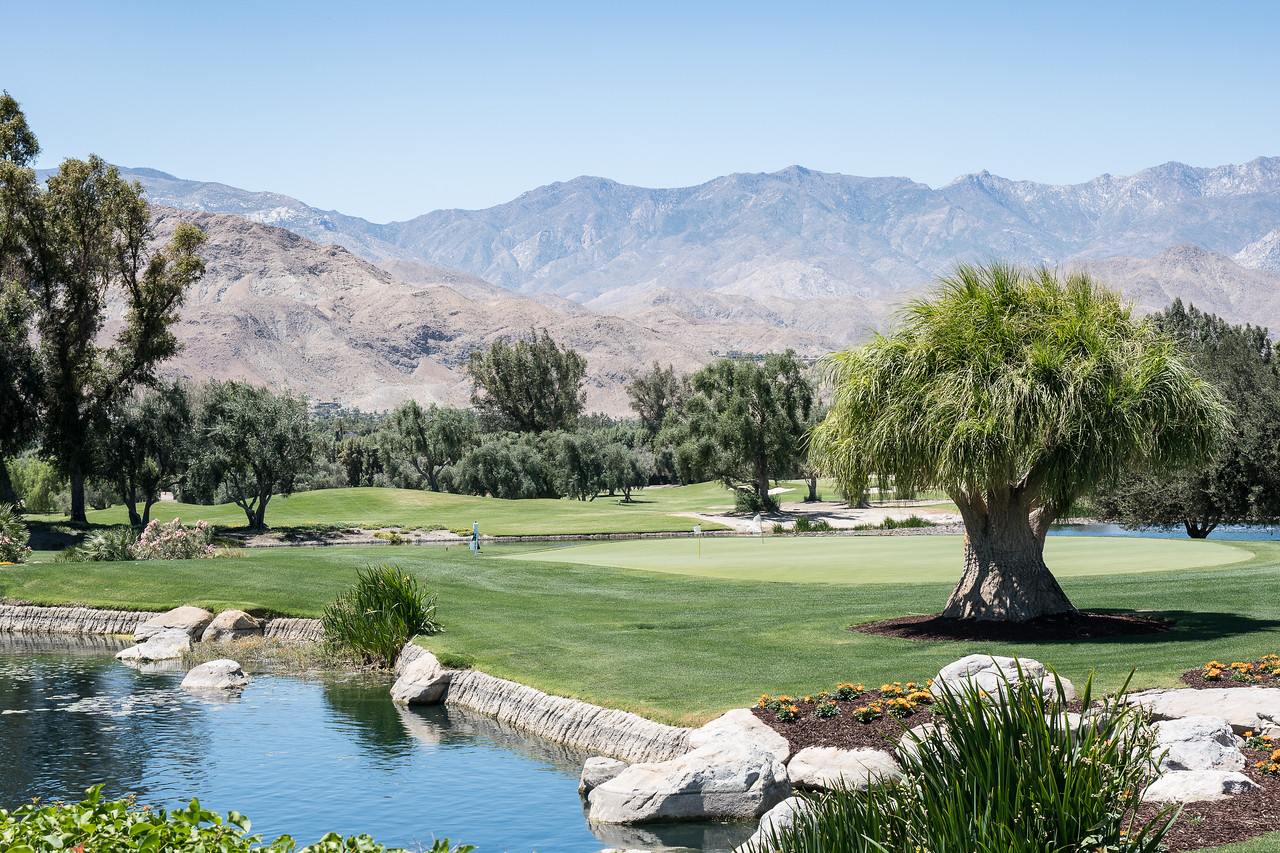 A nine-hole golf course surrounds Sunnylands,  The San Jacinto Mountains are in the distance.

The golf course and the eleven man-made lakes are there for the benefit of the guests.  The lakes are stocked so that one can fish, catch and release.  The strange tree on the right is a ponytail tree, not a palm but a yucca plant.  There aren’t any palms on the estate because the Annenbergs wanted to be reminded of Pennsylvania.

I’ve barely touched on the excellence of this tour.  The house is beautiful; the grounds are lovely.  Sunnylands is a place of significant historic and political events and the players on this stage are larger than life.  There is a fascination in that, too.

Tips for your visit

Sunnylands is near Palm Springs, about 100 miles east of Los Angeles.  The visitor center and gardens surrounding it are open to the public and admission is free.  The tour of the historic house is about $45, and tickets sell out quickly.  Tickets go on sale on the 15th of the month for the following month.  For instance, I purchased my ticket on March 15 for a tour in April.   Sunnylands Center and Gardens closes for the summer months, June through August.  It reopens on September 14th.

Click here to visit my gallery to see more of my Sunnylands photos.