If you read my recent post about WonderCon, then you will soon realize that it was just a warm up to the big adventure which took place in Orlando, Florida, over Easter weekend.  My daughter and I jumped into Star Wars Celebration 2017 and lived to tell the tale.  I feel I must come clean and confess that this isn’t our first such event.  We’ve traveled to six of the eight Celebrations.  They are challenging but fun.

For us the trip to Orlando involves an all day flight across the country.  We arrived on the evening before the first official day.  Nonetheless,  when we walked over to get our lanyards, there were things happening at the Orlando Convention Center. As always there was a line, but outside was peaceful.  We seldom had a chance to use the entrance shown below.  Serious lines were elsewhere.

We discovered those “real” lines on Thursday morning as we stood outside the convention center.  Things didn’t improve once we made it through security.  We stood in lines for wristbands and then finally made it to the final line.  We waited to get into the exhibit hall.  This interior waiting area was called The Chute.  We, along with countless others, spent most of our lives in this place. 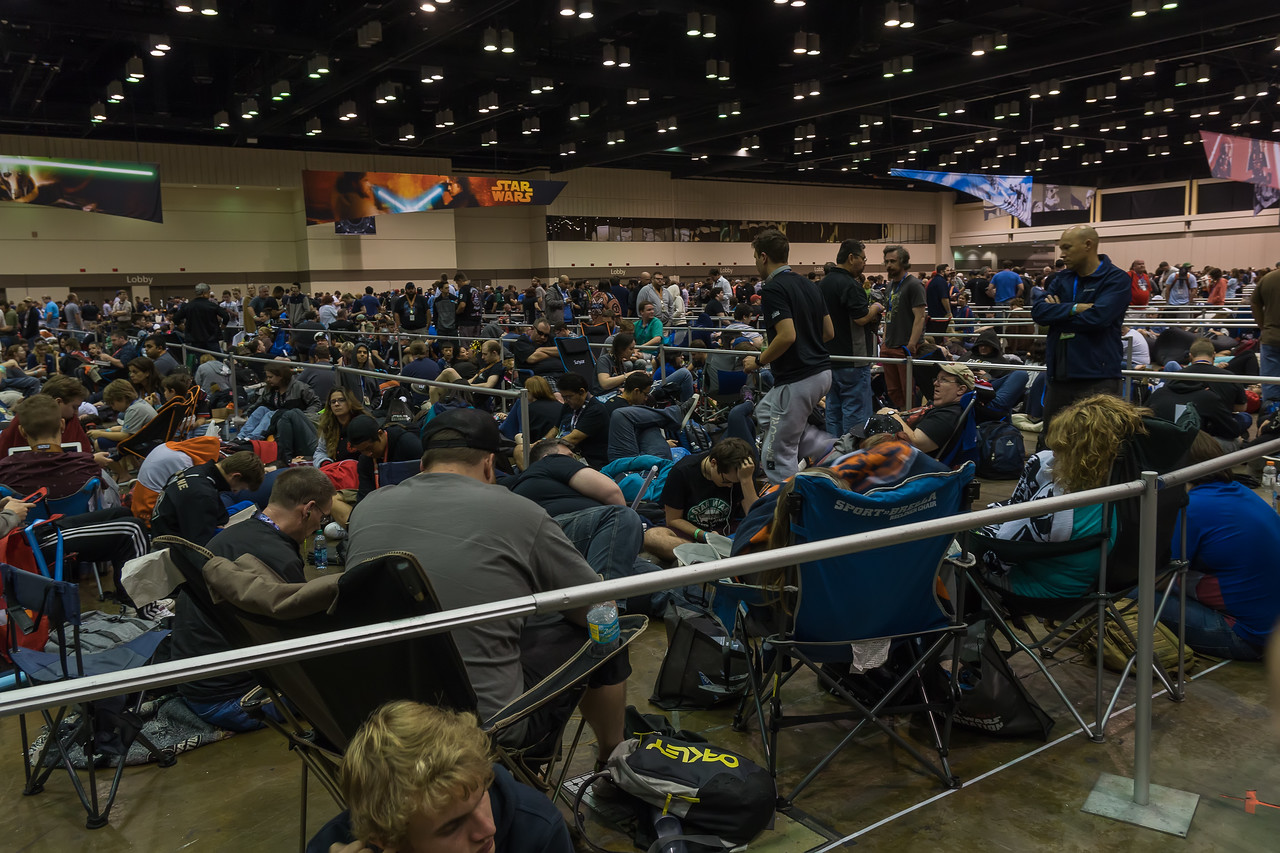 Fans waiting in The Chute at Star Wars Celebration Orlando

One would think this would make for some sullen moods, but actually fans are pretty easygoing.  We may gripe about the organizers but we get along well with each other.  Lines are where Halley and I have made some great friends.

Lest you think this is a stupid way to spend several days, I better get on with the positive moments.  The Droid Builders were there with a room of their own, but also wandering the convention center hallways.  Droids always draw a crowd and kids of all ages love them. 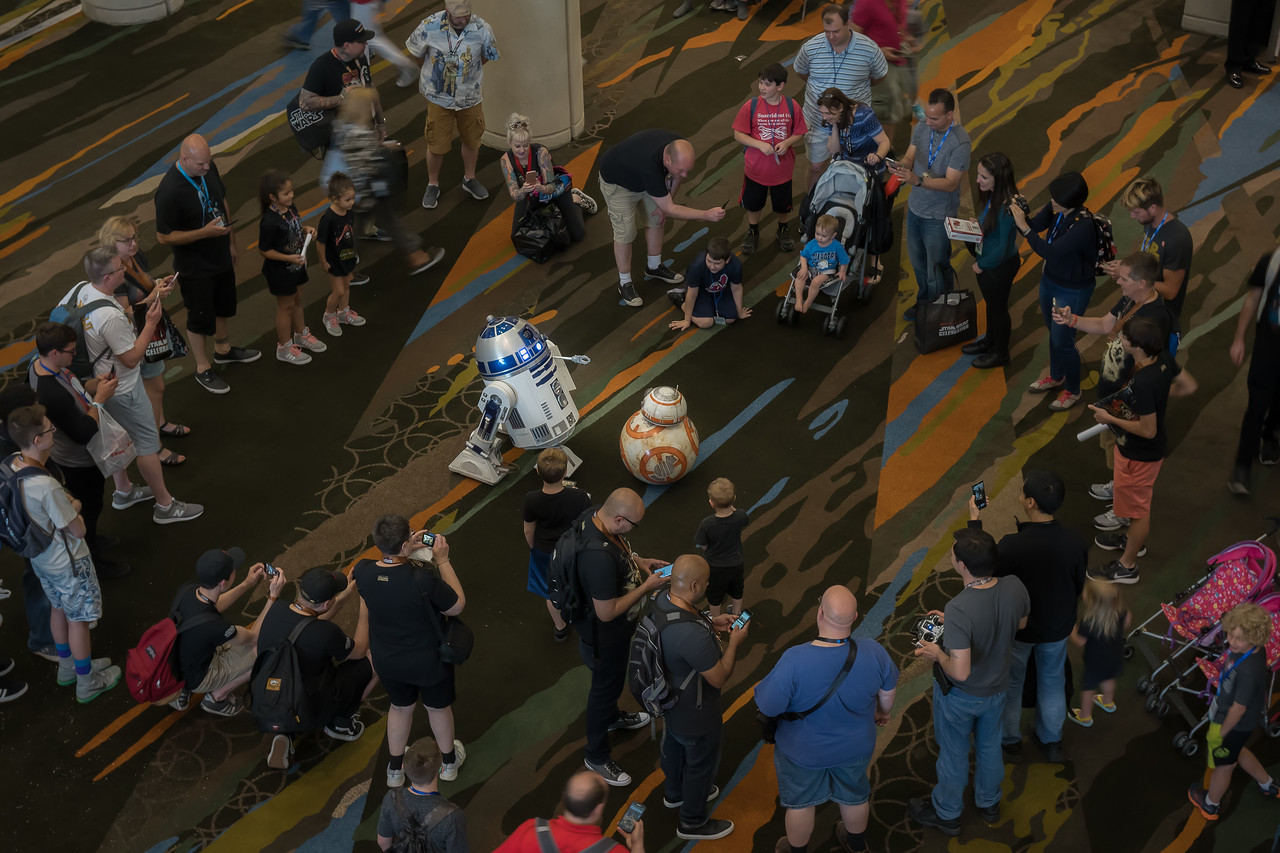 People also stop to photograph fans dressed as Star Wars characters.  Classic Star Wars is still popular and I saw Luke and Leia characters. as well as Stormtroopers.  There has been little mention of the prequel trilogy since arrival of The Force Awakens so it was a surprise to see so many women dressed as Padme Amidala. 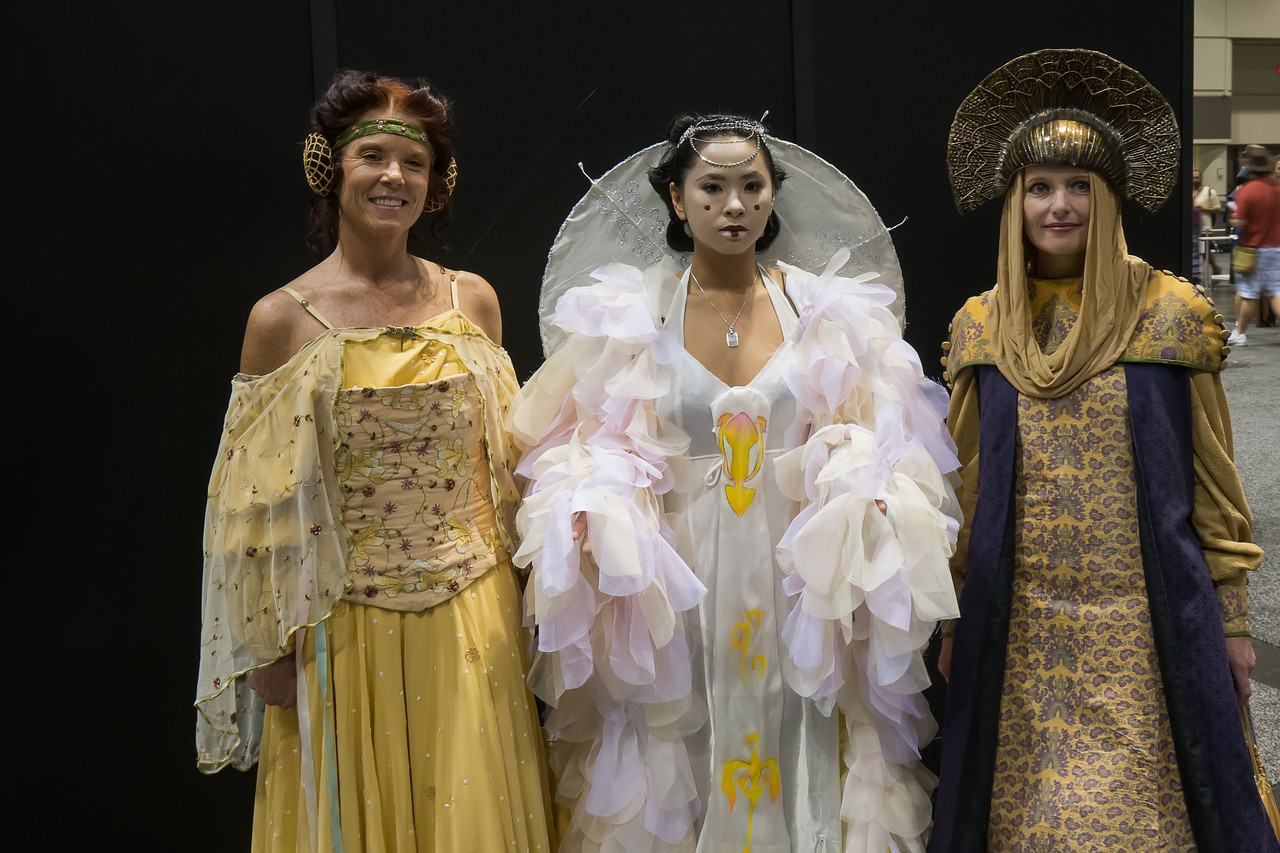 We managed to see a few panel discussion, not the big ones that required we sleep overnight on the concrete floor.  That wasn’t something I was willing to do.  Not all panels required such drastic behavior.  We were able to get wristbands in the morning for a few less dynamic panels.  We also attended others that didn’t require anything more than to show up at the door.

One of the highlights of the convention was that we went to our first after hours party.  We attended a benefit in memory of Carrie Fisher.  It was held at our hotel (very convenient) and the dress was black tie or costume.  You can probably guess how Halley and I were dressed.  Yep, costumes.  We had Carrie cupcakes for dessert! 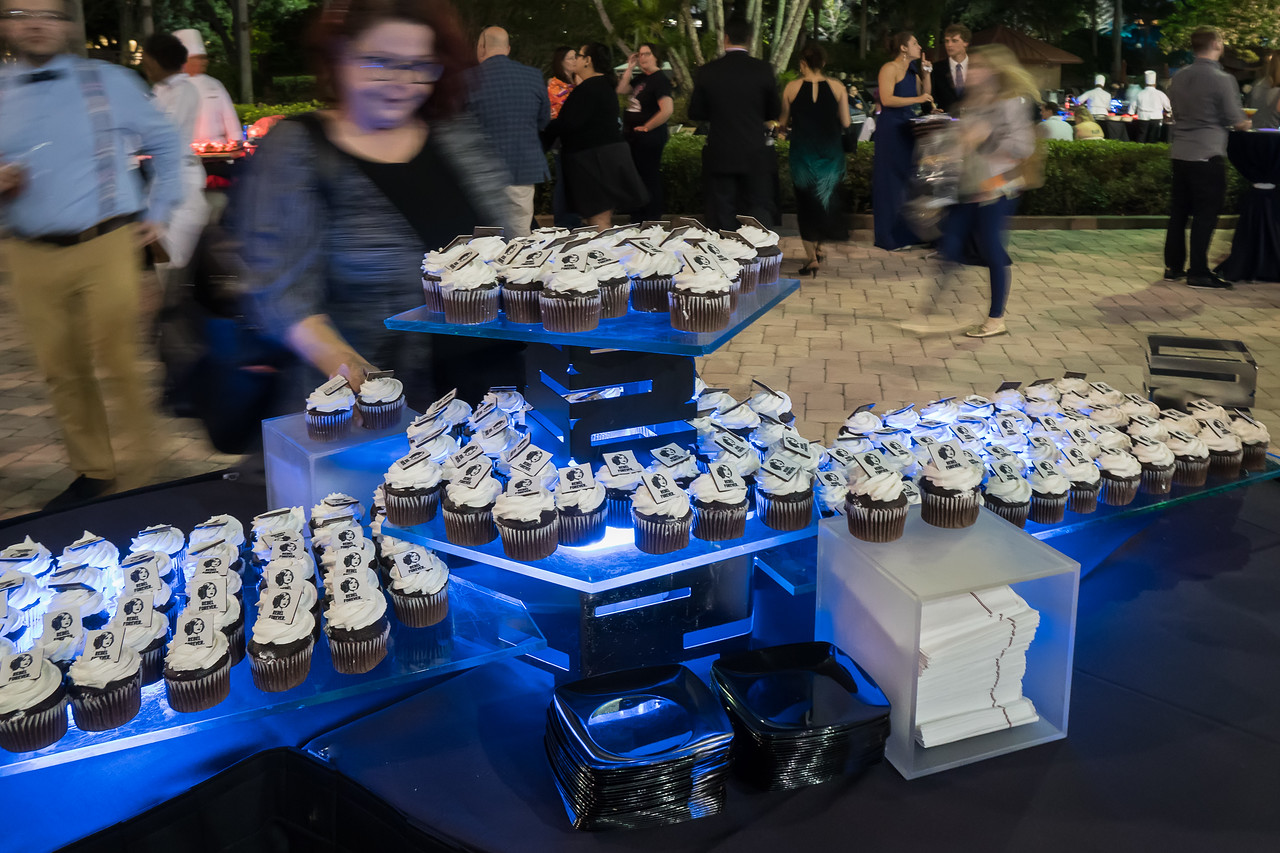 Halley and I have gone to Celebration many times.  We no longer queue for celebrity autographs, although many people do.  There are long lines, of course, and these things are rather expensive nowadays.  I did wander about Autograph Hall just for fun. 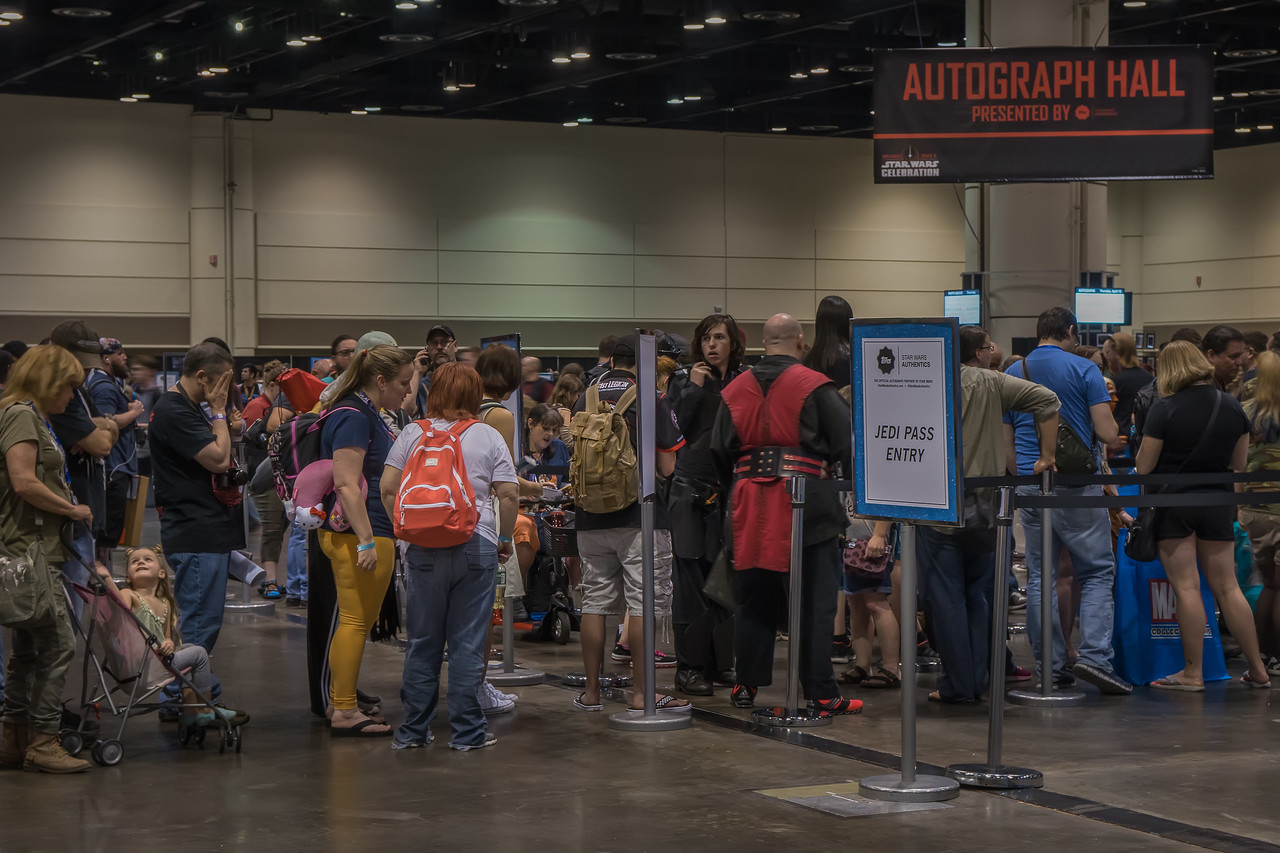 I can feel for the fellow on the left hand side of the above photo.  He’s just getting started and already appears to be in pain.  People were in that area for hours.

Am I sounding grumpy again?  I hope not.  We had a great time. The attendance estimates were for about 75, 000 people over the four days.   So what’s the appeal?  Why subject oneself to such a crush?

Because of the joy of being with fellow enthusiasts.  People are stressed about lines and the mismanaged events but seldom do fans disagree with other fans.  There’s an odd sense of camaraderie.  We’re connected.  I’ve been to other events where it’s every man for himself.  That isn’t Star Wars.  If the person behind you in line is going to be late for his next panel, you let him go ahead.  It’s not unusual to give way and let little kids stand in front so that they can see.  We’ll spend hours taking photos of each other. 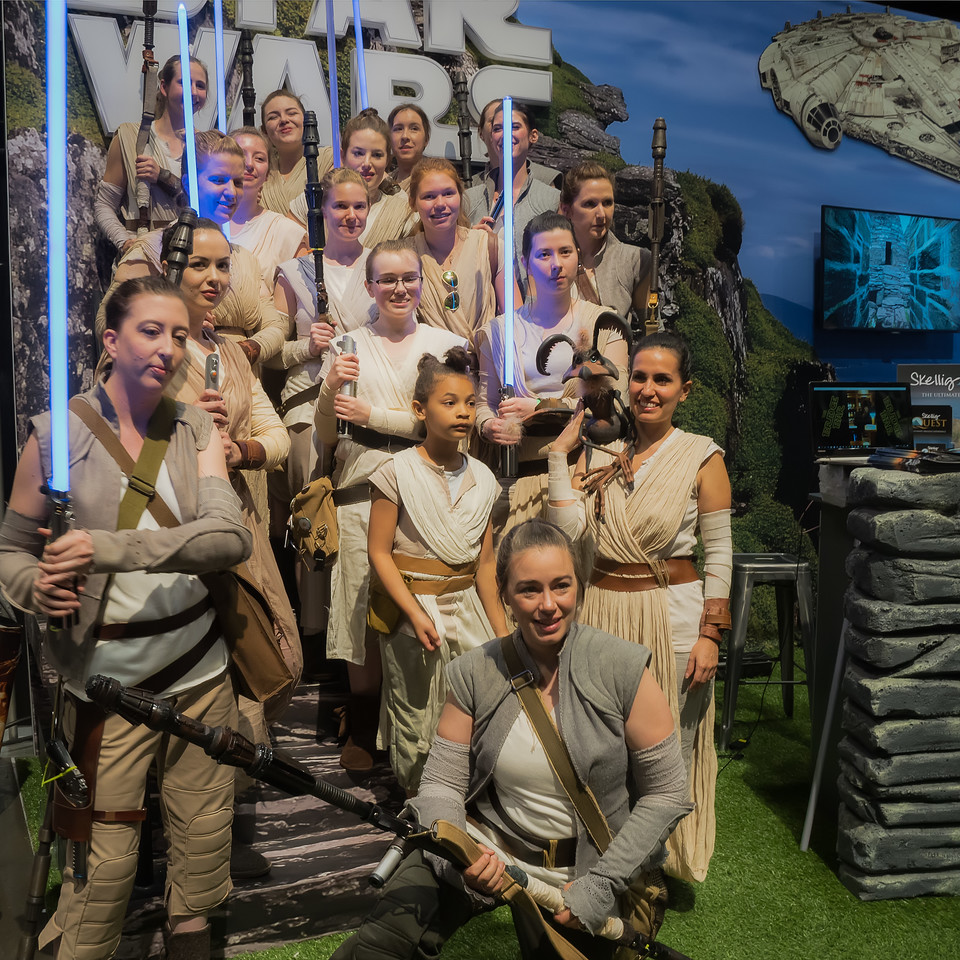 It’s a party, a celebration.  We enjoy the success of our fellows.  Yes, everyone wants to see the trailer for the new movie, but on the other hand you may run into a celebrity just walking along. just as I ran into Forest Whitaker–nothing unusual for Celebration.

As for Halley and I, we also met Timothy Zahn,  purchased original art and donated to charity.  There are all kinds of things going on at Celebration.  One cannot do everything; therefore here’s a few tips:

These are just a few random ideas.  Of course you will want to dress comfortably so that you can sit on the floor.  Bring a camera! You never know who may be walking by.  And most of all, have fun.

Bring the family; enjoy the fun!

No official statement has been made about the next Celebration.  We expect it to be in 2019.   That’s plenty of time to make a costume, and save up for tickets!