For me the word fashion has a strong connotation with trendiness, and the latest style.  But a current exhibit at the FIDM Museum explores  how fashion and film shaped and reflected changing times. This compelling exhibit is titled Exotica: Fashion & Film Costume of the 1920s.   Of course I had to see what it was all about.

The name alone is intriguing.  What did I know of the 1920s besides The Charleston, and that they are called “Roaring?”  The period is the setting for F. Scott’s Fitzgerald’s masterpiece, The Great Gatsby.  Everything in my sphere of knowledge was fictional!  Now I had a chance to see FIDM’s Exotica and discover what helped fuel this fantasy life.

The 1920s put an end to the staid and conservative Victorian attitudes.  The world changed after The Great War.  American women won the right to vote as the 19th Amendment was ratified in 1920. Styles were changing to suit the new woman.  Gone went the long hair so carefully styled into buns and braids.  Women were now getting a bob!  Clothes too were freer and less restrictive, representative of a new personal freedom. 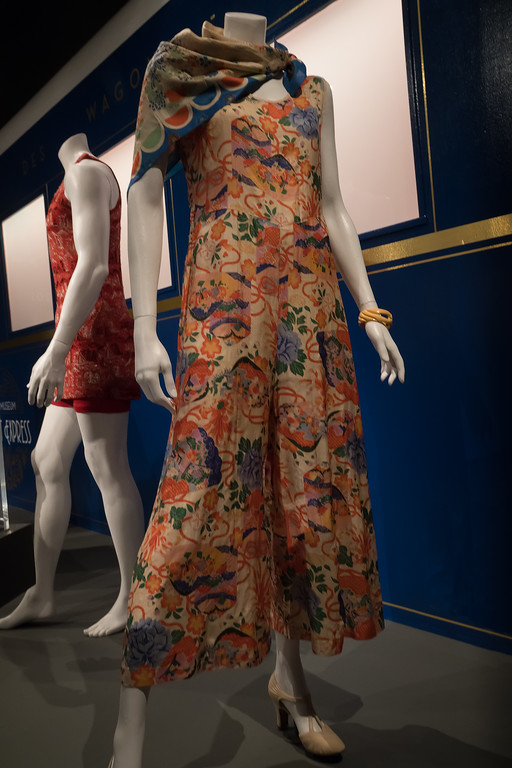 Lounging Pajamas and Scarf on display at FIDM’s Exotica exhibit

While women were still expected to wear skirts, there were occasions and places where the above pajamas were acceptable.  Knickers were also an option.  Both styles fell under a Sportswear heading which made them appropriate for certain situations.  The options were limited, but designers like Coco Chanel were pushing the boundaries.

I think of the 1920s as a period of elegance.  The war was over, there was hope for a new prosperity and a better world.  Evening dress was slim, lose-fitting, with a drop waist.

The above dress is deceptively casual but beautifully designed.  It doesn’t need old-fashioned restrictive corsets. This is a dress designed to captivate!

The influence of exotic locales

Along with the silks and velvet used in the expensive garments, new synthetic materials were appearing.  These made fashion more affordable.  The styles of the 1920s also incorporated designs that reflected foreign lands.  Think about the impact of the discovery of Tutankhamen’s Tomb in 1922. Suddenly everyone was interested in Egypt.  This touring coat illustrates that trend.

The Orient also had a strong appeal.  In the following image the evening dress on the right is from Paris, designed by Callot Soeurs.  According to the sign, the flowers are peonies.  I read somewhere that this flower is a symbol for female beauty in China.  How appropriate for an evening dress.

Fashion influenced by the Far East at FDIM’s Exotica exhibit

The outfit on the left was titled the “Changshun” costume.  It was a movie costume worn by Faith Hope for an film in the 1920s.   Films featuring exotic locations were popular.  Fashion copied the costume styles and shared this taste of romance with the public.

The film industry also added to the notion that make-up was acceptable.  In the past cosmetics were associated with “painted women” and of course taboo.

We take this sort of thing for granted now. It’s hard to imagine what a stir makeup must have caused.  Suddenly it was acceptable for all women to to use it and feel glamorous.  This too started in the 1920s.  It was certainly an amazing decade.

Whether you like costume, design, or just old movies, the FIDM Museum is the place to be this spring.  It’s located in downtown Los Angeles, and the admission is free.  While you’re checking out the fashion of the 1920s, be sure to see the  Motion Picture  Costume Exhibit on display right next door.  They are well worth a visit.

But don’t dawdle.  Both are on display for another ten days or so; April 22 is the last day.  Hope you get a chance to see them.