At a loss for day trip ideas, I remembered the Ronald Reagan Presidential Library, a venue with terrific special exhibits.  While it isn’t next door, it is an easy day trip.  I ordered a ticket for the current production about World War II and headed west.

As expected, there were various rifles and pistols.  As one enters the exhibit, a massive tank roars as it breaks through a wall. 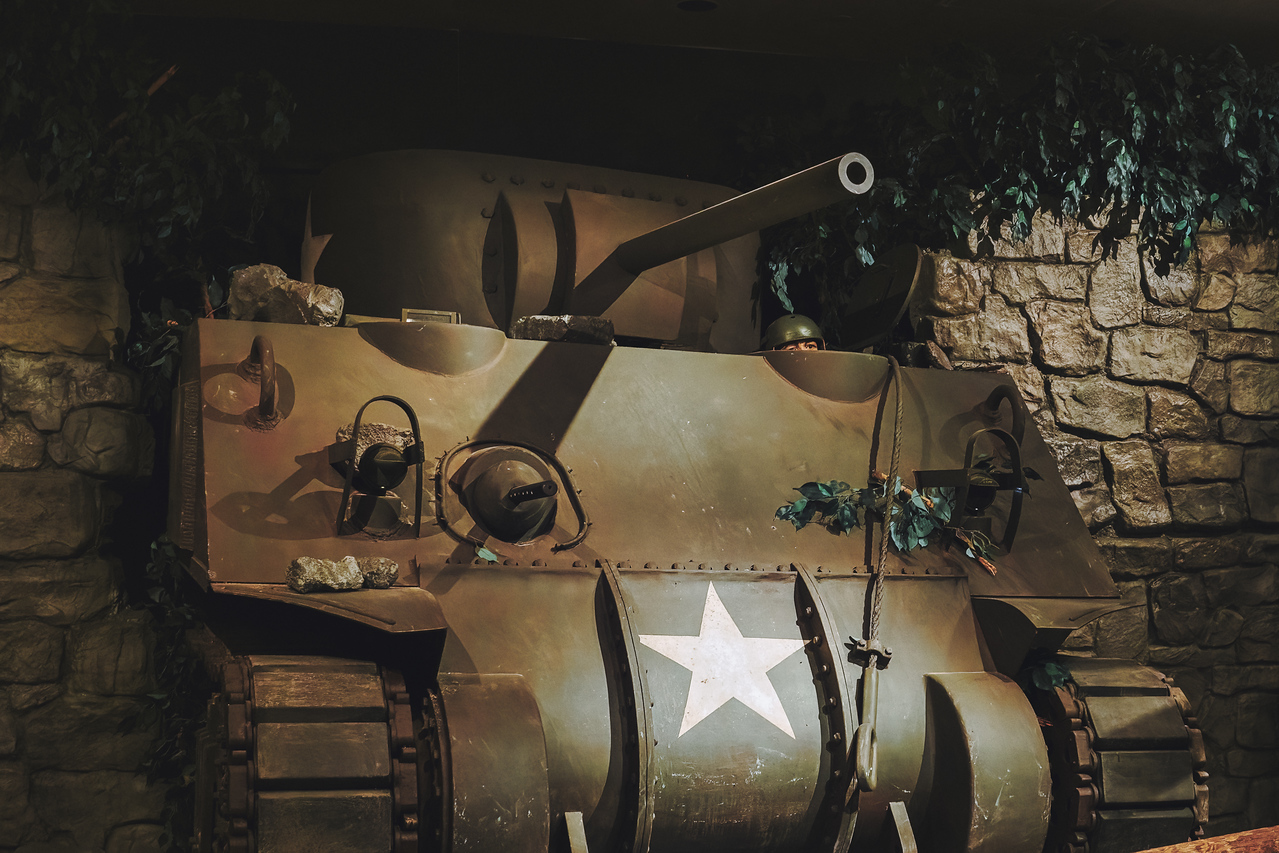 I turned right so it wouldn’t run me down.  Did that constant rumbling make the guard at the entrance nervous?  While impressive, the best was yet to come.

One of the things I liked about this event was the focus on life in the war years.  With a subtitle, The Secrets of World War II, I expected the focus to on military espionage.  Instead, I learned about civilians like Dottie Dotson who did her part as she volunteered at the North Platte Canteen.

The townspeople of this Nebraska town started this restaurant service in December 1941. Trains, either west or east bound, carried servicemen destined for the front.  Dottie was 14 years old when she starting helping out.  Service members gave her patches as a thank you.  I had never heard of Dottie, but I’m glad I had a chance to see her jacket.

Have you heard about the Ghost Army?  Don’t tell me if you have.  Its forces included the 14th, 108th, and the 119th US Infantry divisions.  None of these units existed; they were part of a ruse in 1944.  This army landed in Europe just before D-Day; all evidence lead the Germans to believe they had landed.  This was a well executed charade, an all-out deception with tents and equipment.  The units even had patches worn by service men walking around Britain. 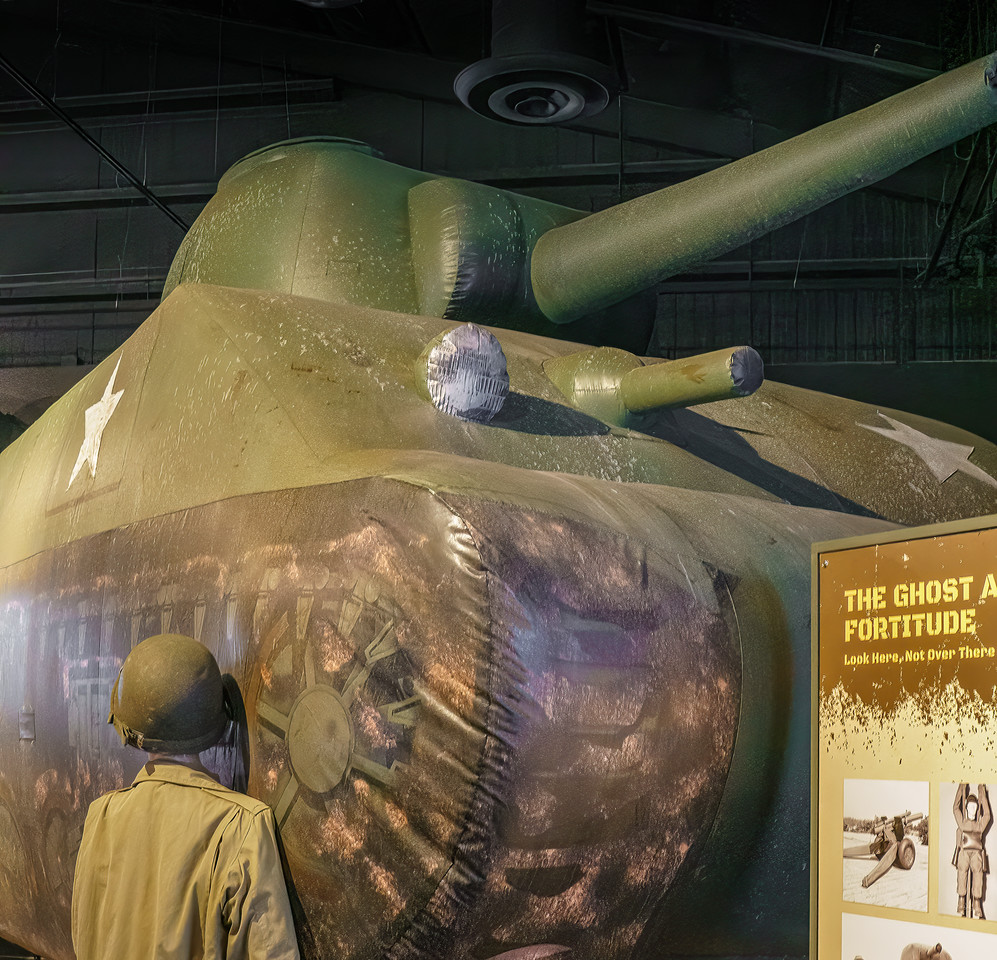 The exhibit features one of the fake rubber inflatable tanks.   I had never heard of such a thing; I’m impressed by the ingenuity.

Horses, mules, and dogs usually come to mind when one thinks about animals in World War II, but pigeons played a role. 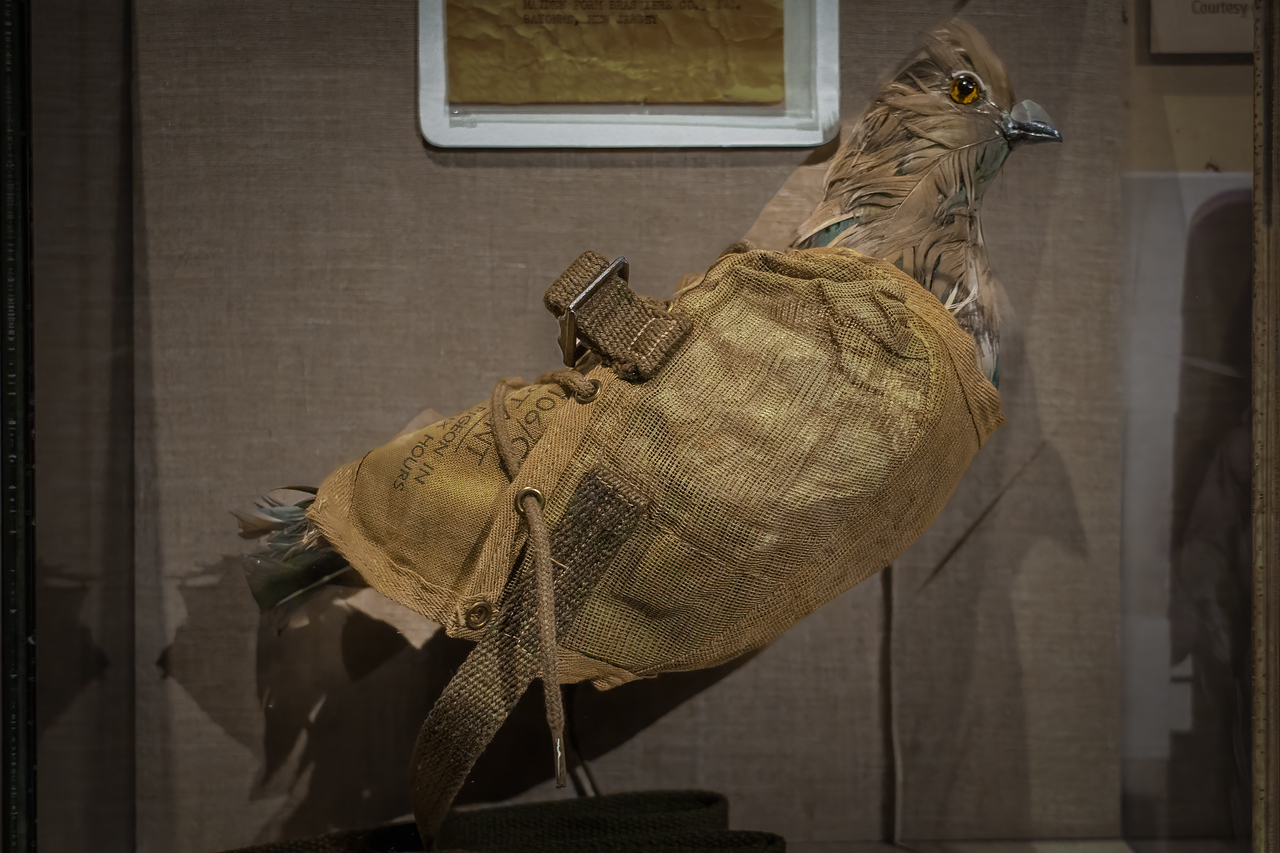 The brassiere company, Maidenform, designed the vest.  It protected the bird during a parachute jump.  Let me clarify.  A parartrooper carried the pigeon.  Once they reached the ground, the serviceman removed the vest and let the bird fly free.

I planned to see everything in one visit, and perhaps if I had made a better schedule, I would have.  This World War II exhibit is full of unique artifacts and models, from comic books to bathing suits.   To see more photos from my visit click here.  Meanwhile, I highly recommend you visit, and allow a lot of time!