Was it July when my kids and I booked a cabin in the San Jacinto Mountain town of Idyllwild?  After grueling summer heat, this September retreat sounded perfect.  Little did I suspect a weekend threatened by fire and torrential rain!

On September 5th, the Fairview Fire broke out east of Hemet, and I tracked it carefully lest it head east up the mountains toward Idyllwild.  I certainly didn’t want to be a tourist amid an evacuation.  After a few days of checking with the rental company, we were assured that the town was safe.  Great news for us, but it must have been frightful for Hemet.  The fire burned almost 30,000 acres.

After a long drive up the winding mountain roads, we arrived at the cabin.  I was expecting something rustic, so this hillside home was a pleasant surprise.  The deck in the back looked out over the forest and toward a ridge.

Contrary to expectations, the bedrooms were below this main level.  The primary bedroom was underneath the area shown in the above photo.  It had an entrance to the lower deck. 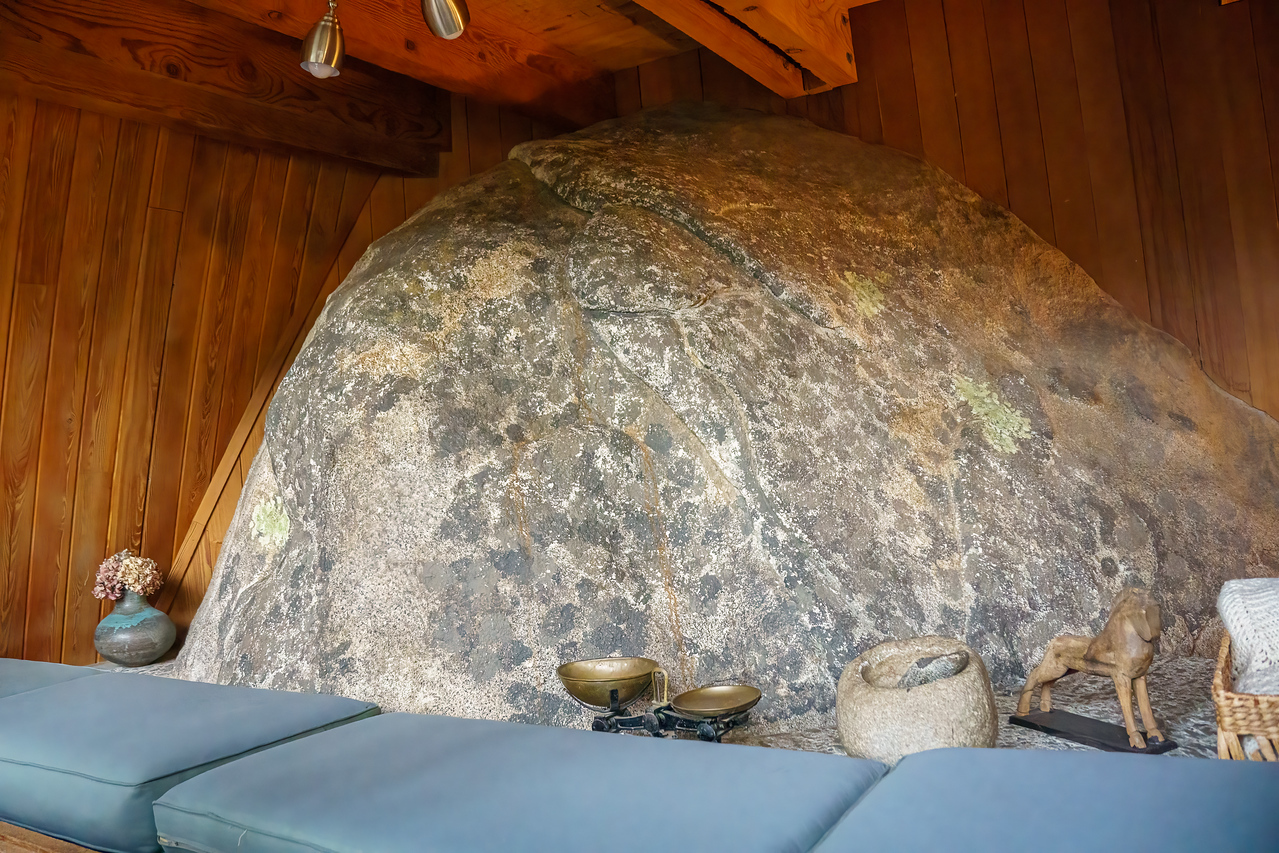 The rock in the living room. It’s opposite the windows in the photo above.

The main reason we booked this cabin was for the rock.  I’ve never stayed in a house built around a massive granite outcropping.  For the record, this thing extends to the lower floor and is part of the master bath.

What’s with the deer?

All around the town, I continued to discover deer sculptures, each painted with a difference scene.  Some, like the one below, displayed views of Idyllwild and the local mountains.  Others varied.  One resembled Van Gogh’s “Starry Night.”

I later discovered that the Art Alliance of Idyllwild started the deer project in 2013 with a “Herd” of thirteen sculptures.  What a terrific idea!  The town has added to the herd in subsequent years.  I’m not sure how many they now have.  Is it twenty or more?

Tahquitz Peak at over 8800 feet is the tallest peak in the San Bernardino National Forest.

We knew the weather was changing.  The clouds were creeping over the ridge.  The image above always felt like I was looking toward the south, but later I learned it was about due east!  Please don’t leave me alone in the forest; I’ll get lost.

Torrential rain battered the cabin on our second day.  What a perfect opportunity to read!  As you can see by the photo above, I had brought a Chet and Bernie mystery.  One should always travel with a book or two.

The next day we walked to town and saw trees down and banners shredded.

Banners torn and ripped by the wind and rain.

We weathered the storm and didn’t suffer any catastrophe other than getting a bit wet.  By the next day, everyone was cleaning up, and life had returned to normal.  We walked about town, visiting the parks and museum grounds.  Boy, I didn’t have any trouble getting my daily steps!  We were just about ready to head back to the cabin when the mayors arrived.  Nothing could make the trip more complete than seeing Mikey and Mitzi!

Co-mayors, Mikey and Mizti greet one and all, including me!

With the passing of Mayor Max in August, Mikey and Mitzi have become co-mayors of the town.  It was a thrill to spend a few minutes with them!

I’m sure we’ll return to this lovely spot.  I want to try it in the winter!  Meanwhile, to see more images from my weekend adventure, please click here.