When California re-opened in early June, I gathered my courage to abandon my mandated islolation and to drive away from my house.  I made a cautious visit to the California Botanic Garden in Claremont, California.  It was the safest destination I could imagine, and even though the day wasn’t picture-perfect, I kept the appointment. 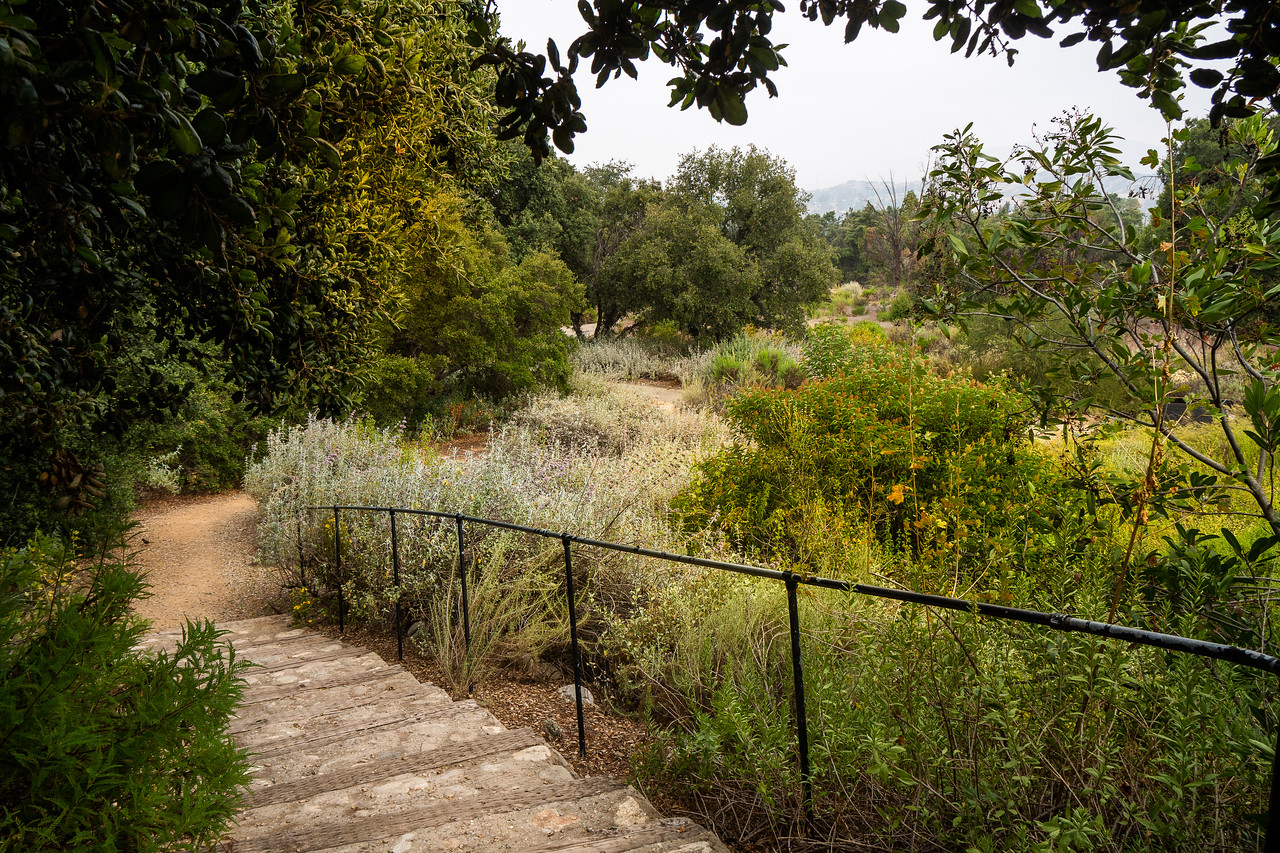 The unmanicured look of this vast California garden

It was a mild morning with a much-welcomed breeze.  (Anything to blow away the virus!)  I had a map and my camera as I set out to explore a new world.

The Botanic Garden contains over 6,000 species of California plants.  None are in carefully designed beds, and few have signs indicating what is growing.  I can tell a palm tree from an oak.  I also recognize lavender.  As for the rest, they were mysteries.

Flowers in the garden

The flower on a sage plant

I did manage to find a sage garden.  I don’t cook much, but I do know the taste and smell of sage.  The variety of sage plants was a surprise. In the following photo, I included some leaves.  Do you think they look like sage?  I didn’t touch them as I doubt that sort of behavior is permitted.

I never realized that sage had such small purple flowers. The textures on these caught my attention, and I took far too many shots.  Finally, other visitors came along.  It was time to continue my exploration. 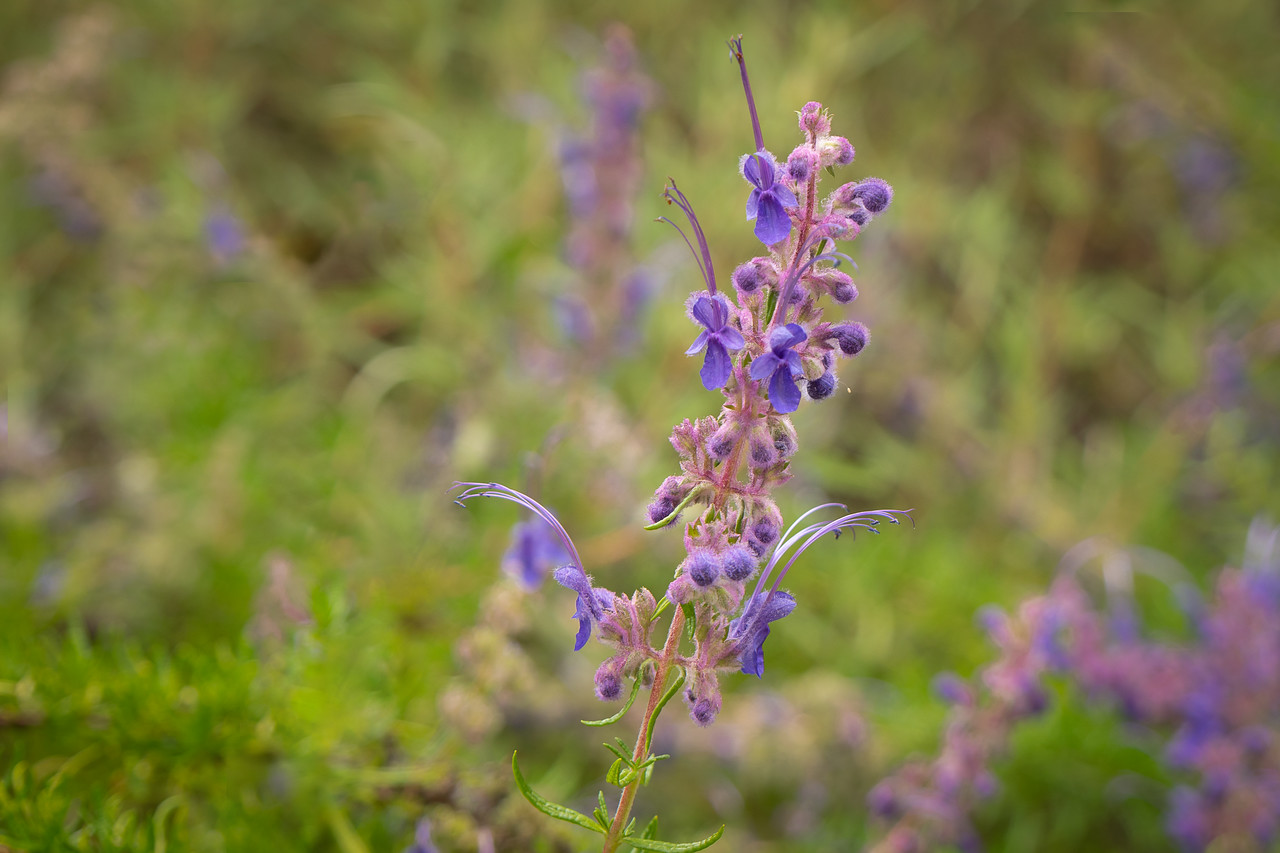 I have no idea where I went.  I followed my map but really didn’t pay much attention to a set plan.  Somehow I ended up in a thicket frequented by bees.  Hmm, that wasn’t the best idea.  However, like the bees, I was attracted to the strange flowers.

The above purple flower was tall and spikey, which makes me think it’s Perstemon. My guess was suported by a nearby sign.  I love those sweeping feather-like petals(?) and the velvety texture. 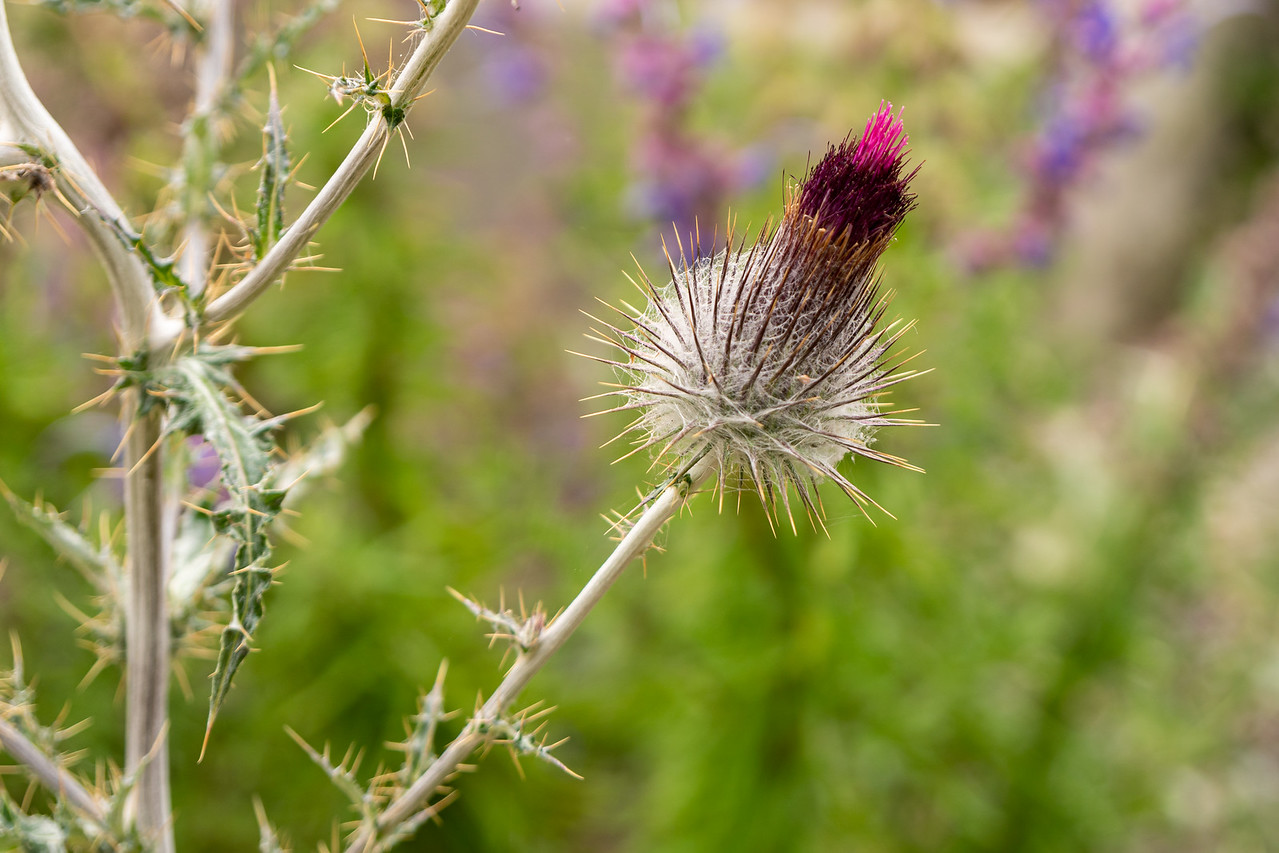 Thistle with its thorns and its flower

I also discovered in a nearby crossroads a cluster of what looks like thistle.  Can you tell I don’t know much about botany?  I wanted to include those terrifyingly sharp thorns in the above image.  The real attraction for me was the texture of the flower.  Whatever you do, don’t pick it.  That’s got to be painful.

I spent a couple of hours wandering the garden’s rugged pathways.

Wandering the ups and downs of the California Botanic Garden

I saw several birds and a few squirrels. Oh, and rabbits scamper about as well.  Lest you think I’m exaggerating when I say this isn’t a manicured garden, I’ll include the above photo.

Eventually, I was heading back toward the parking lot. Although it had been a quiet morning, a few visitors could now be heard in the distance.

Taking a break to say hello!

Despite my need to rush, I couldn’t resist taking a moment to say hello to one of the garden’s horticulturalists.  He was kind enough to pose for me.
We social distanced as I asked a few questions. It was interesting to learn that one can have a career in the outdoors. (I live a sheltered life, right?) The best part was to see a smile in this time of masked faces.  For the record, he did have a mask. We both did. The photo was an exception.

The garden was my last outing as I now am under a stay-at-home order again.  California is closed and many events have been canceled.  While I may not be traveling, perhaps you will.  If so, I can recommend a garden if you’re looking for a pleasant outdoor venue. The California Botanic Garden, and others like it, will open again. When they do, take a stroll through the fresh air. It helps.

To see more images from my outing, please click here.