The Petersen Automotive Museum, in collaboration with Comic-Con Museum, is currently featuring the Hollywood Dream Machines exhibit.  I’ve been waiting for this since I first heard about it last April at WonderCon.  It was well worth the wait, as once again, I spent hours checking out the movie vehicles.  It didn’t matter whether I saw the film because the important thing is the vehicle, which is always impressive.

The Petersen is a fabulous place, and they do a marvelous job curating their exhibits.  This latest gem features vehicles from science fiction and fantasy productions. It is one of my favorites genres, and what better way to start than with Star Wars.

Landspeeder, on loan from the under-construction Lucas Museum of Narrative Arts

Of course, I gravitated to Luke’s Landspeeder. How could I resist?  This is the vehicle used in the 1977 movie!  I felt like I was on Tatooine.  Alas, you’re not allowed to get in and ride to Mos Eisley.

Another popular exhibit featured vehicles from Mad Max: Fury Road.  The Nux Car is particularly weird, but then consider the setting of the movie. 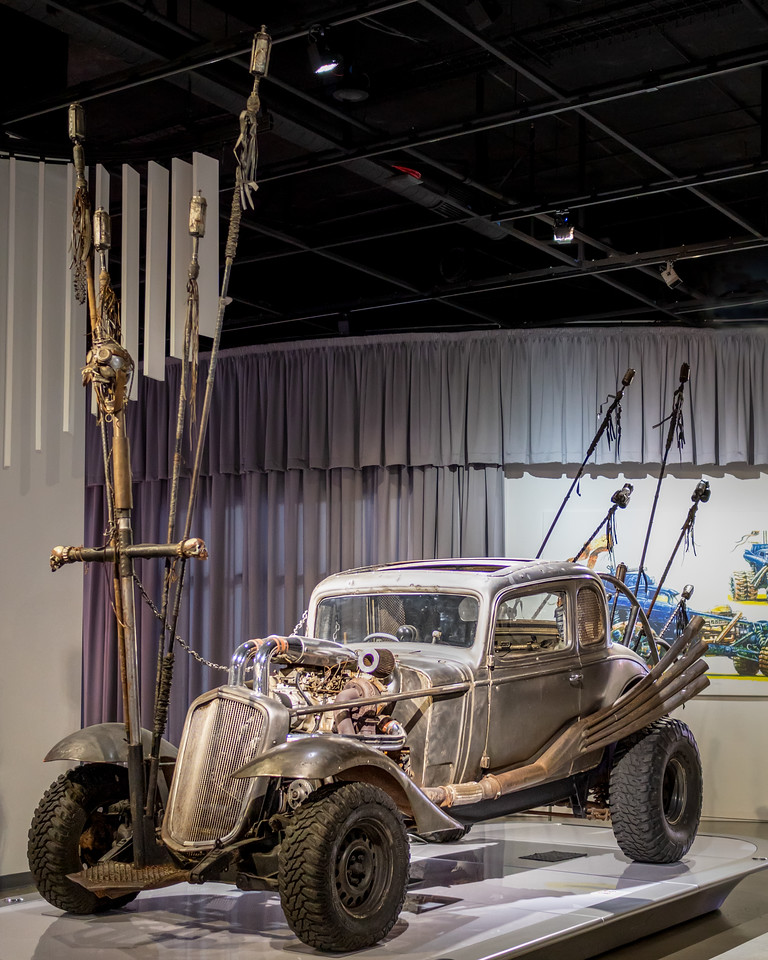 I had to move back from my subject to get all the tall accessories to fit in the frame.  The Nux is based on a 1934 Chevrolet Coupe.

While the cars were amazing, the motorcycles took fantasy to a new level.  Of the three images included in my gallery, the most unusual is the Biker Hound.

I saw that movie but have no memory of this bike!  Perhaps I intentionally blocked it out of my thoughts.

The Hollywood Dream Machines exhibit features several vehicles from the Batman franchise. While I captured a few images of the batmobiles, my favorite vehicle is seen below, and it was driven by a villain, or should I say The Villain.

I like this photo because it includes the background with the bat signal shining above the cityscape.  The seats of the Jokermobile are “durfboards.”  The interior of the car is lined with green shag.

As I started this post with one obsession, I will have to end with another. If you haven’t heard that Marvel Studios is setting records at the box office, well that’s okay.  You can still appreciate this great car.

According to a sign, which is just out of frame, Tony Stark based his Iron Man suit colors on those of this car (red and gold).  By the way, this roadster is from the collection of Jon Favreau.  If you’re a Marvel fan, this will mean something to you.

I’ve only given a glimpse of the wonders on display at the Petersen Automotive Museum.  It’s a fantastic place.  If you’re interested in the Hollywood Dream Machines exhibit, it will be at the museum through May 2020.