As part of my Star Wars holiday, I spent a few days doing some Chicago sightseeing.  I won’t tell you how many years it’s been since I was last in that city, but let’s just say that my childhood memories didn’t prepare me for what the modern Chicago had to offer.

The view my hotel room never failed to captivate me.  I checked it day and night, making certain it was real.  The skyline of Chicago looks nothing like that of Los Angeles. Chicago has skyscrapers!

The view of Chicago from my hotel room

The above image was taken just before dawn one morning.  The city was getting started for the day.  In addition to all those tall buildings, Chicago has bricks.  I seldom see a brick structure in Southern California.  I had forgotten how much I miss them.

My first day in Chicago I spent roaming about with family.  Breakfast was at Lou Mitchell’s.  We didn’t know where to eat, so we relied on Yelp.  It proved a good choice; the fruit cup was magnificent.

The fruit cup at Lou Mitchell’s

Yes, the tomatoes and poached eggs were also mine.  You can see why I was so excited about the fruit!

Psychedelic Sightseeing at The Bean

Chicago sightseeing almost demands that one see Willis Tower.  I discovered that most people refer to it by its old name, Sears Tower.  That works for me.  Nonetheless,  while I didn’t go to the top of it,  I did walk by the building on my way to visit Cloud Gate at Millennium Park. 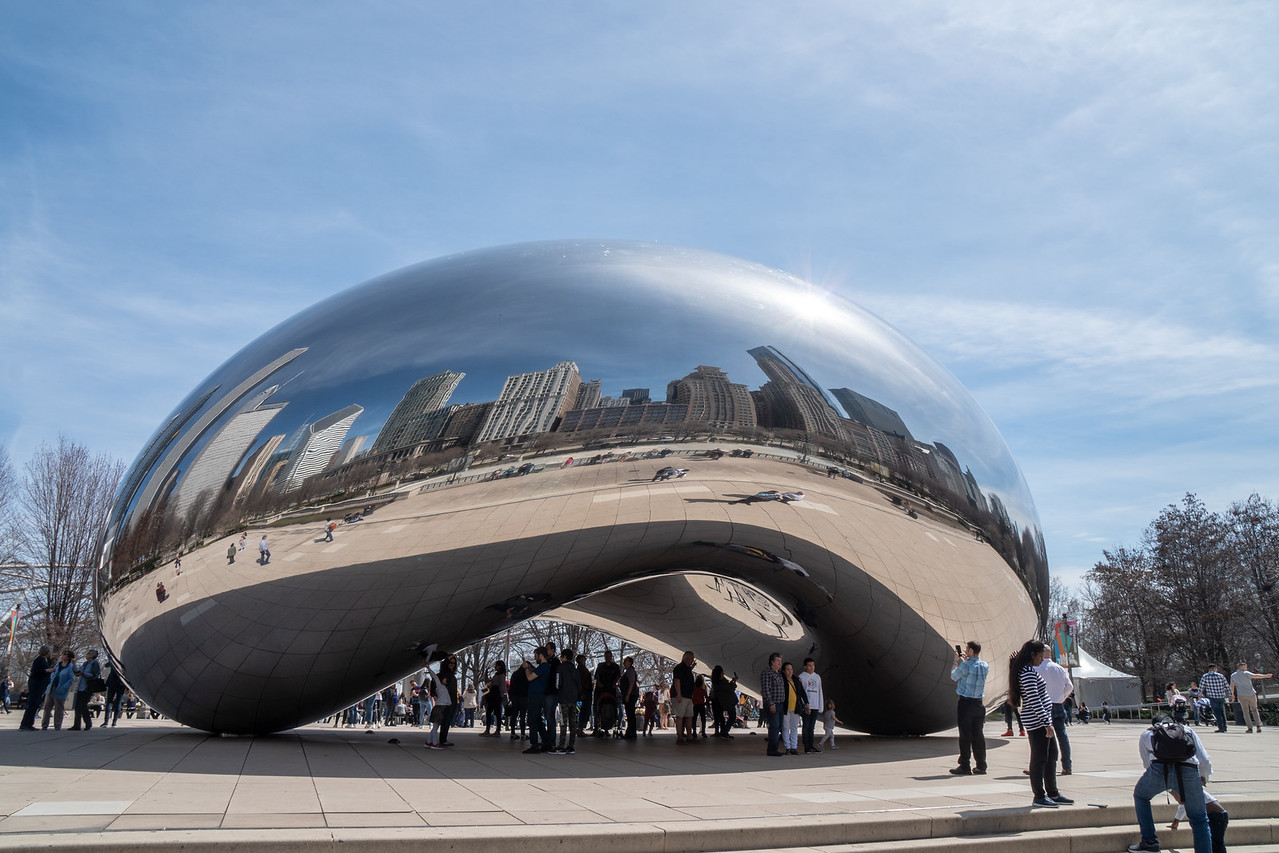 The stainless steel sculpture, Cloud Gate, by Anish Kapoor is a must on any Chicago sightseeing agenda

We took countless photos under The Bean.  The reflections underneath are very weird.  We had fun playing with them.  I’ll also add that it’s easy to lose one’s sense of perspective.  At one time, I leaned back thinking there was plenty of space and bumped my head.  It made a resounding thump.

We walked to Navy Pier for lunch.  That sounds simple, right?  Well, we didn’t plan on the river getting in the way. 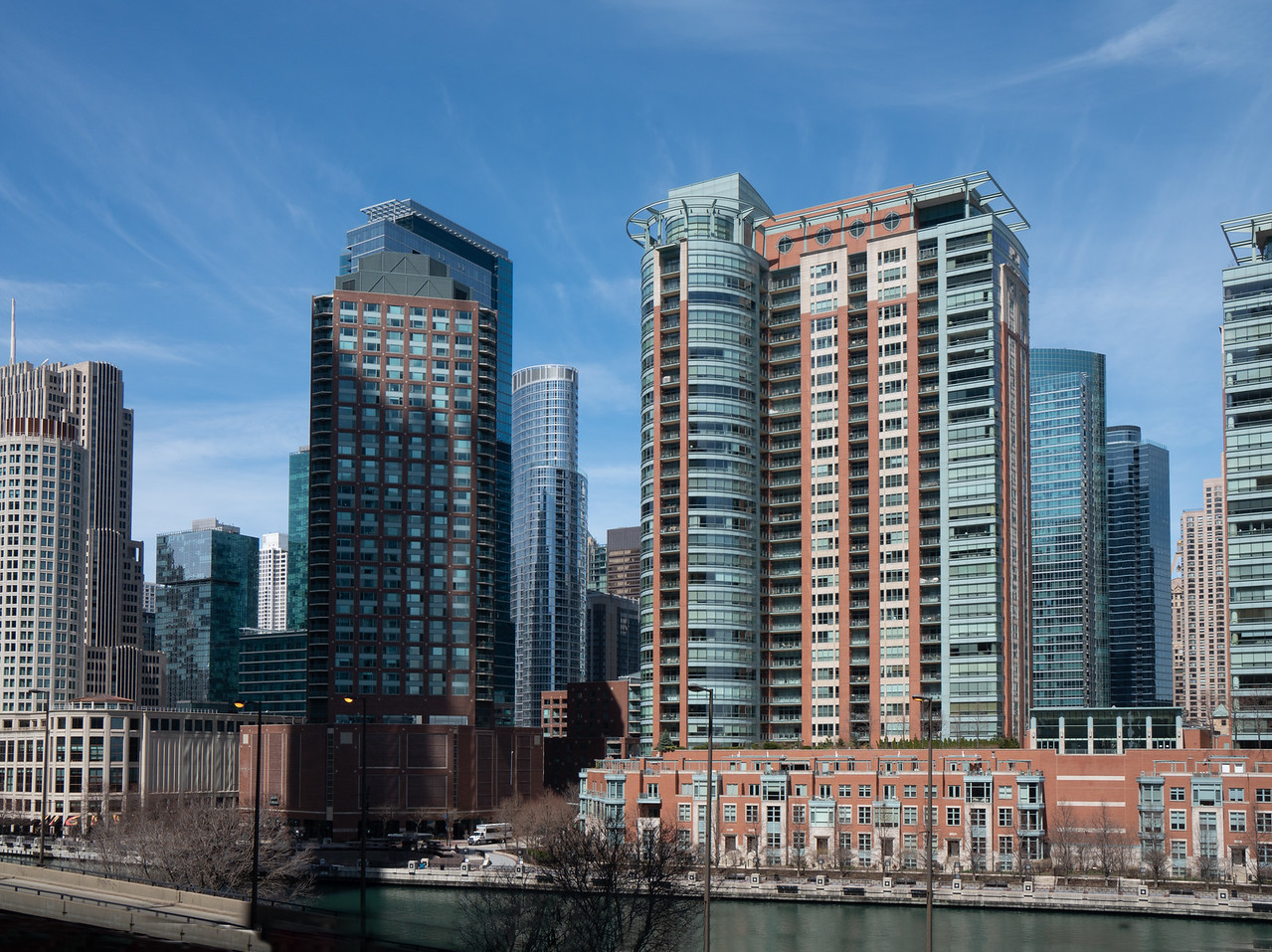 We had to backtrack several blocks to find a bridge over the Chicago River.  You can just see the water at the bottom of the photo above.  I must have been too disgruntled to make another image of the waterway.  For the record, I suggest you take a bus.

Our goal was to get lunch and to hop on a water taxi that would take us to the aquarium.  Neither task was easy.  We did manage lunch, but the taxis weren’t running.  I guess April is still considered winter.

Navy Pier does have one other attraction, a Ferris Wheel.  A weekday in April is a good time to ride the wheel; the line was short!  We also had a good view of the city

Since we couldn’t get to the aquarium by boat, we opted to take a bus.  We purchased a pass, but evidently, it was incorrect.  The bus drivers took pity on us and helped us get to our destination.  I think they must have thought we were terribly stupid and needed aid.  They were right!

Chicago bus as seen from another vehicle

I’m posting a photo of a bus as a thank you to the drivers who helped us and made certain we transferred safely.  Without their kind assistance, we would still be walking around Navy Pier!

Ornate wooden revolving doors at the entrance to Shedd Aquarium

We closed our day at Shedd Aquarium.  It was too late to visit since the aquarium closed at 5:00 and it was already 4:00.  Perhaps next time.  The entrance to Shedd is beautiful, so I wandered around a bit.  Shedd is a modern facility, but the decorative motifs on the entrance doors speak to the time of John G. Shedd.  His aquarium was built in 1929, and the architects added aquatic motifs in every possible location.

To see more images of my whirlwind tour of Chicago, please click here.