I recently wrote about my Rose Parade adventures in Pasadena, a destination I reached by train which I caught in Azusa. While I stood on the platform, I noticed the Durrell House not far from the station.  Instantly, I knew I would be paying a visit. 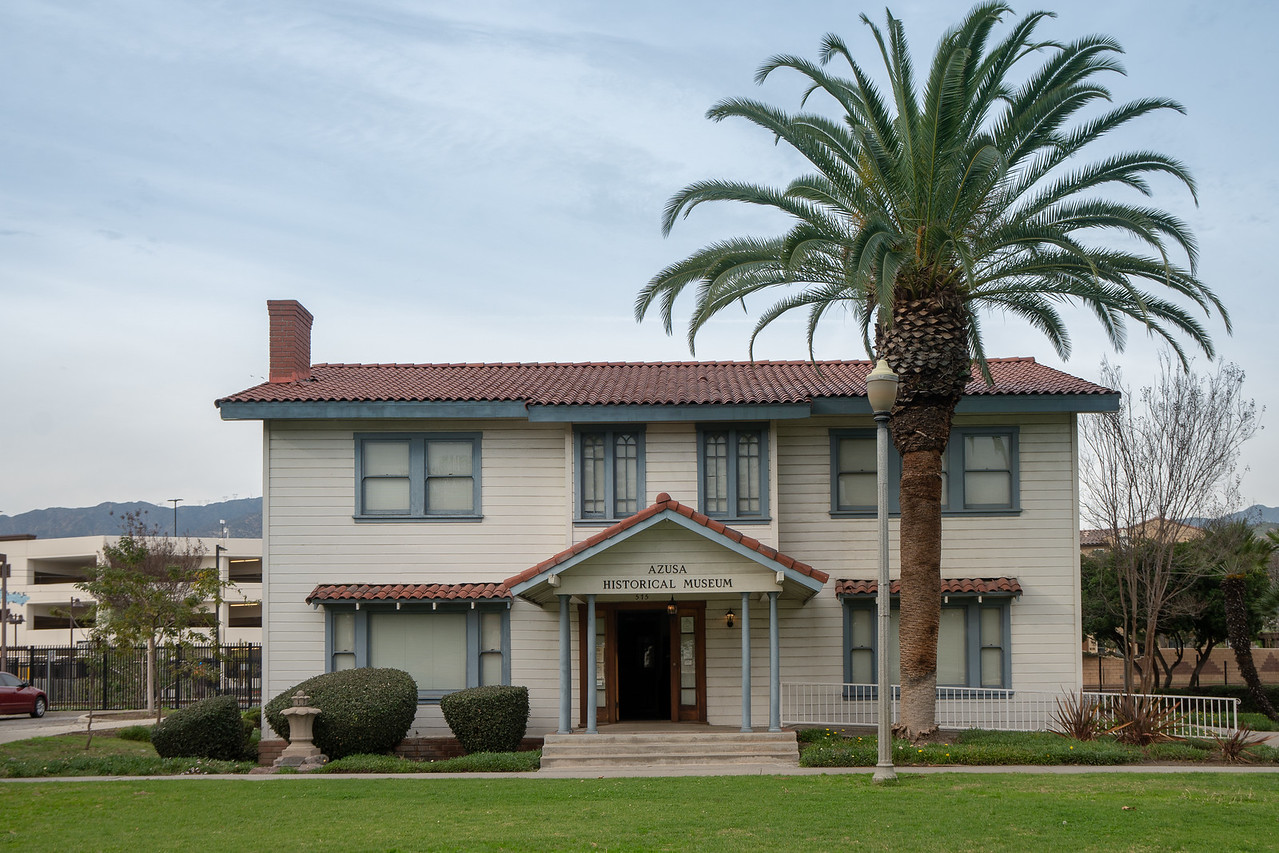 Durrell House with the light rail line just behind it

The sign over the porch notes that this house is home to the Azusa Historical Museum.  However, the house itself is historic.  This home was moved to the current location.  The story is complicated.  Thank goodness, the house has been preserved and now serves as a museum.  As for the name “Durrell,” I asked the docent how to pronounce it.  One brother said durr-ELL and another said durr-ell.  I guess you can choose whatever emphasis you like.

A bit of History

The real star of this story is the museum and the history of the San Gabriel Valley.  Native Americans lived in the valley before the establishment of the missions.  The Spanish controlled the area for about one hundred years from the mid-18th century to the mid-1800s. There were ups and downs along the way, but California became a state in 1850.   As for Azusa, the area was called the Azusa Rancho, and shipping entrepreneur, Henry Dalton, owned it.   Homesteaders came in around 1860, as the Federal government confiscated private rancho land.  Ultimately the town of Azusa grew, and now the Historical Society preserves that heritage at Durrell House.

I enjoy visiting the small local museums, and Durrell House was no exception.  Its exhibits are on the first floor.  In the back is a schoolroom display with old maps, books, and desks.  It gives the flavor of the small country school. 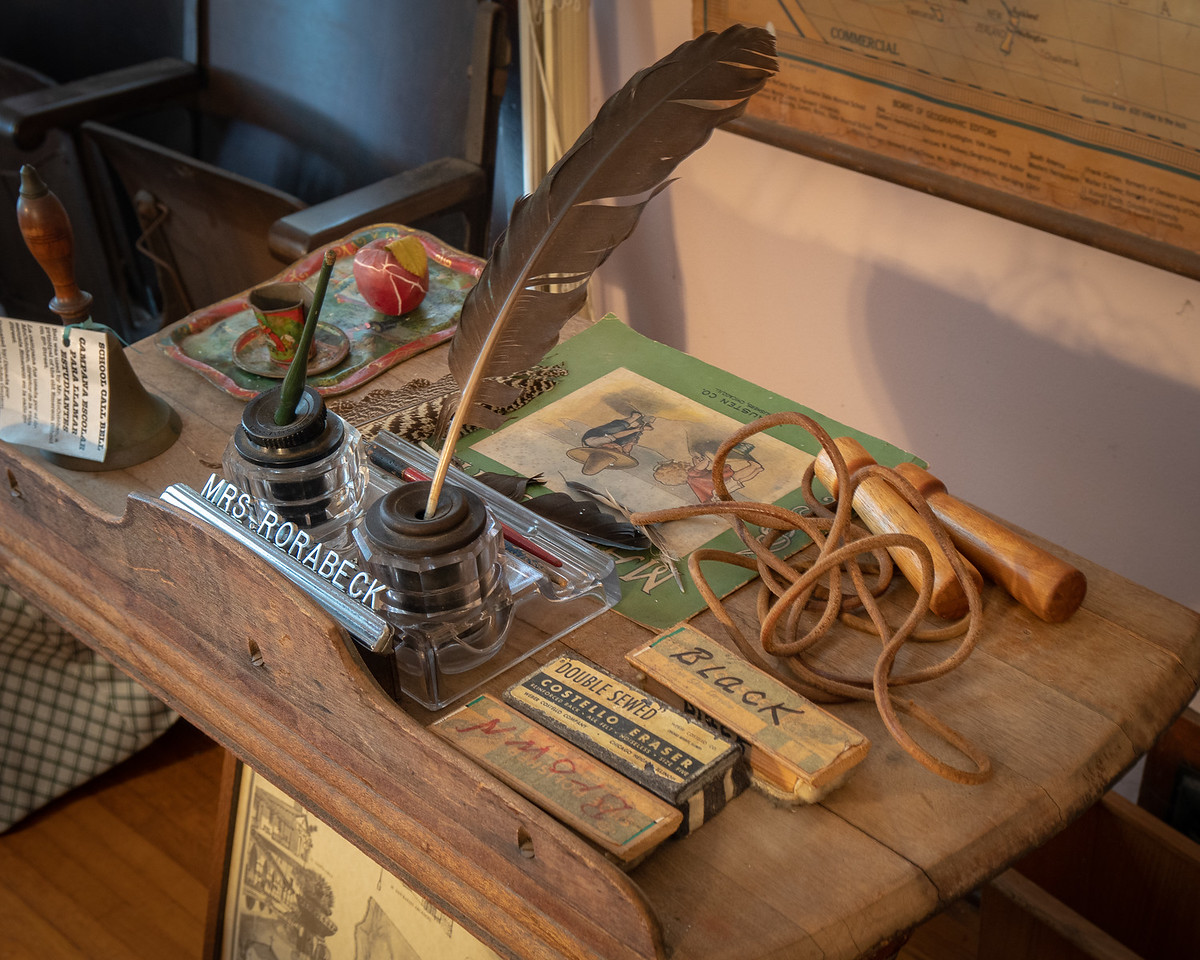 A whimsical old-fashioned look to the teacher’s desk

I like all the odd bits in the photo above.  They add texture and make me want to touch them.

The kitchen is next to the schoolroom.  It’s a marvelous room containing two stoves, a gas range, and a wood-burning stove.  There is also an old refrigerator and some wonderful cabinets. 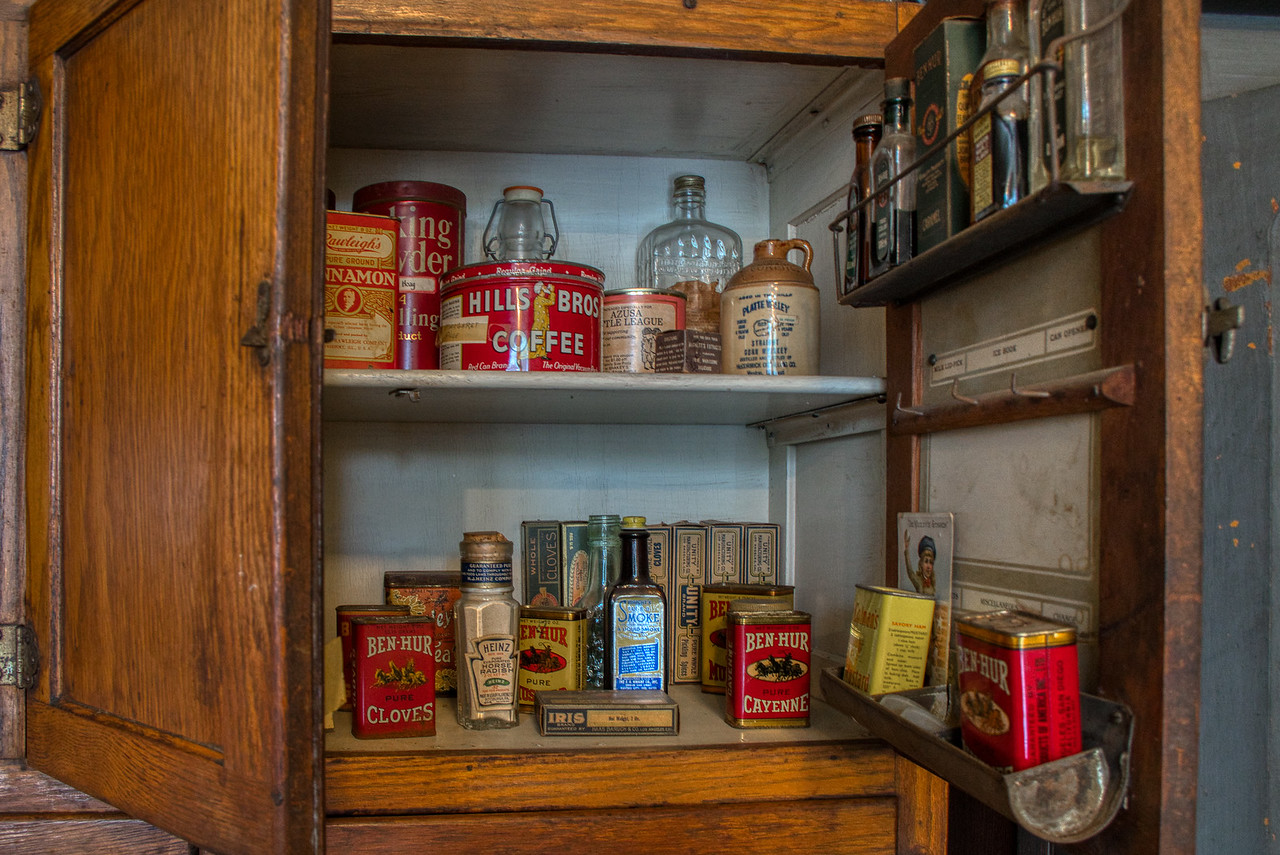 Just below this cabinet is a shelf where one can make and roll out the dough.  How handy is that?  It makes for a thoroughly modern kitchen.

Also on the ground floor is a bedroom and a back porch area with tons of tools.  I liked the front parlor with its square grand piano.  The piano may not have been a feature in the original house.  Many of the museum’s treasures are items donated by local families.  Still, the piano is a lovely piece.  No one can play it as it is too fragile. 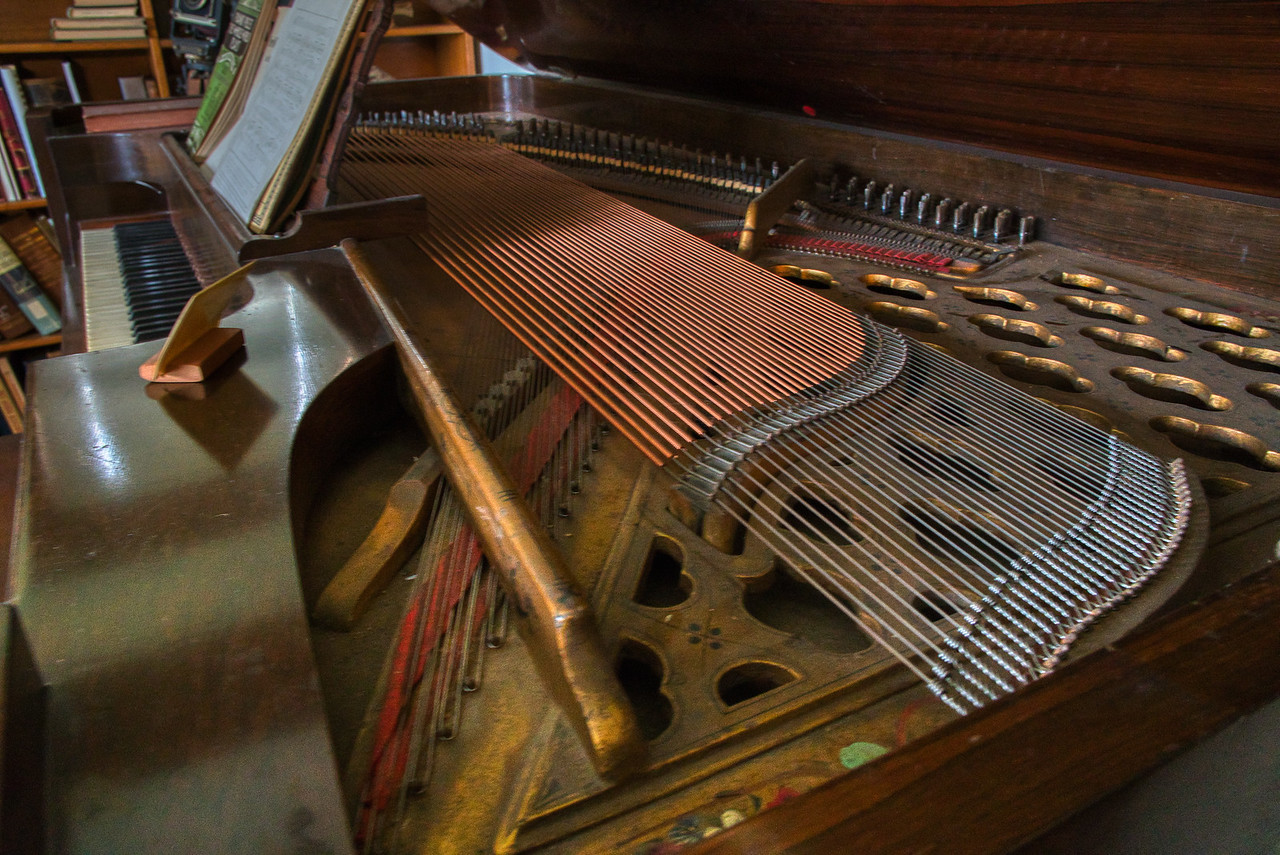 Square grand piano on display at the Durrell House

Have you heard “Pop goes the weasel?”  Well, I now know what that nursery rhyme means, or at least one interpretation.  The Historical Museum has a spinning weasel.  It’s a device for spinning yarn into skeins.  After so many rotations, a gear pops a lever which causes the wheel to stop spinning.  In so doing, all the resultant skeins are the same size. 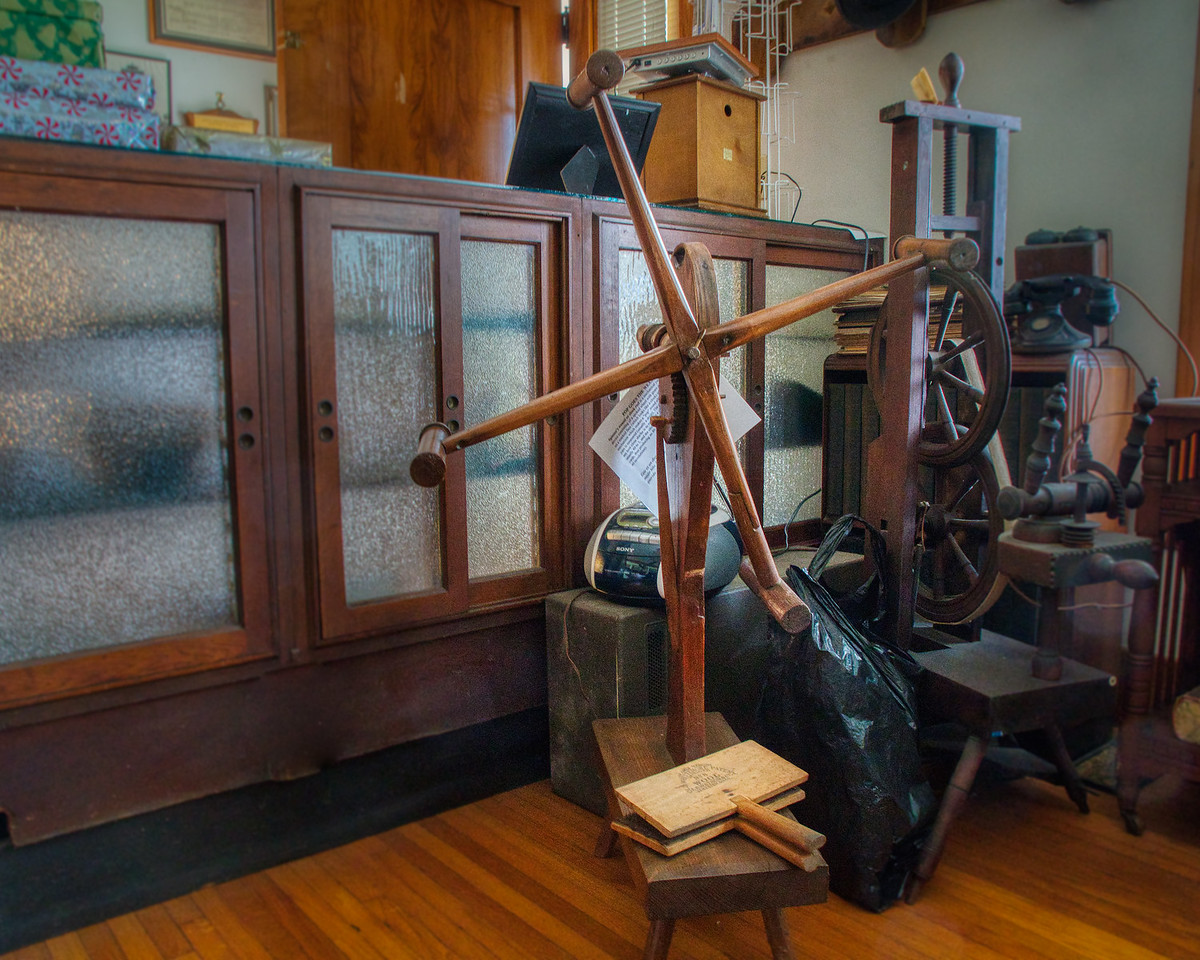 The spinning weasel tucked into a corner of the museum

Just in front of the descriptive paper (above the CD player) is the little lever that “pops.”