I was eager to make the drive out to Palm Springs once again because I heard that their Air Museum had World War II fighter planes, specifically Grumman planes.  I can’t resist those stories about the carriers in the Pacific and the Navy planes.  The muesum has planes from other eras as well, but that’s a story for another day.   My heart was set on seeing a Wildcat.

Grumman F4F Wildcat on display at the museum

There are several planes in the Pacific Hangar, so many that it was impossible to isolate one to get a uncluttered photo.  The Grumman “cats” were all in a row.  It was like heaven!  This little fighter in the photo above dates back to the 1930s.  There were successive versions of the F4 during World War II.   As for the wings, a Navy plane needed to fold its wings to fit on the aircraft carrier.  Space was at a premium.   The Wildcat was a scrappy little fighter, and sturdy!  It couldn’t fly faster than the enemy but it could take a pounding and still come back fighting.  The flag insignia is the old symbol.  As WWII progressed, the bright red circle was too easily confused with the Japanese flag.  By 1943 or so,  most planes were painted with the basic star and bars.

I won’t bore you with more about the cats.  Instead, how about a Douglas dive bomber? 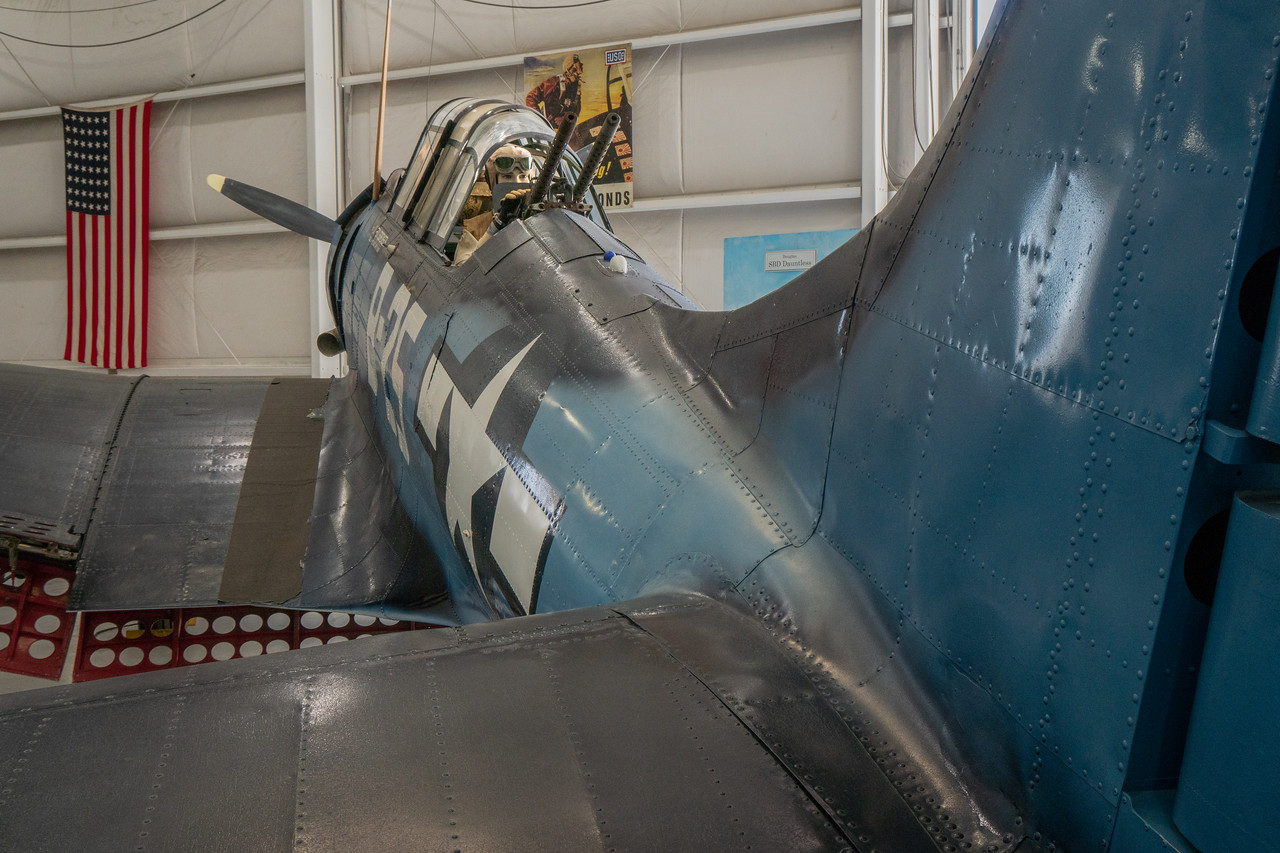 My first thought when I saw the Dauntless was surprise.  It was much bigger than I expected!  The SBD Dauntless saw a lot of action in the Pacific.  Well, not this exact plane.  While it still belongs to the Navy, its story is very different.  It crashed in Lake Michigan.  We entered the war in 1941 but our men weren’t trained.  The Navy built makeshift carriers from Great Lakes passenger boats and cruise ships. One of these was the USS Wolverine.  From her practice decks, the pilots learned to fly.  Mechanical issues caused the above plane to crash into the lake.  My docent said I would be surprised how much stuff is at the bottom of Lake Michigan.

The Marines are tough

I toured the hangar with a helpful docent who filled me in on the backstory for each of the planes.  The Vought Corsair was interesting.

The cockpit is set back on the fuselage, so far back that the pilots weren’t able to see the deck of the carrier.  The planes, intended for the Navy, went to the Marines instead.  The docent and I figured the Marines were tough enough to fly the bothersome Corsair.  They didn’t care if the nose was long.  As it turned out the Corsairs were perfect for the fighting on island beaches.

The huge painting in the background was done by Stan Stokes.  He’s a local artist but widely known.  He has murals in several national museums and at the Reagan Library in Simi Valley.  Also, for the record, the Corsair was sold to the British who used it as a naval fighter.  British pilots had no problem landing on the deck.

A touch of Europe

I spent most of my time in the Pacfic Hangar, but did stroll briefly over to Europe where I found the requisite B-17.  This bomber is massive compared to the fighters.  I couldn’t get a good  camera angle so you’ll have to trust me as to the size of it.  I did photograph a Studebaker parked under its wing.

1932 Studebaker Dictator parked under the wing of a B-17 bomber.

All one can see of the bomber are the engines.  Somewhere beyond the right-hand edge of the photo is the fuselage and the cockpit.  I told you it was big!

Most of the planes at the air museum have been restored and can fly.  The Dauntless is an expection, but it was in the lake for some time.   I didn’t go flying but I did climb into the cockpit of a Fairchild C-119 “Flying Boxcar.”  Don’t get excited.  There wasn’t an entire plane, just a bit of fuselage. 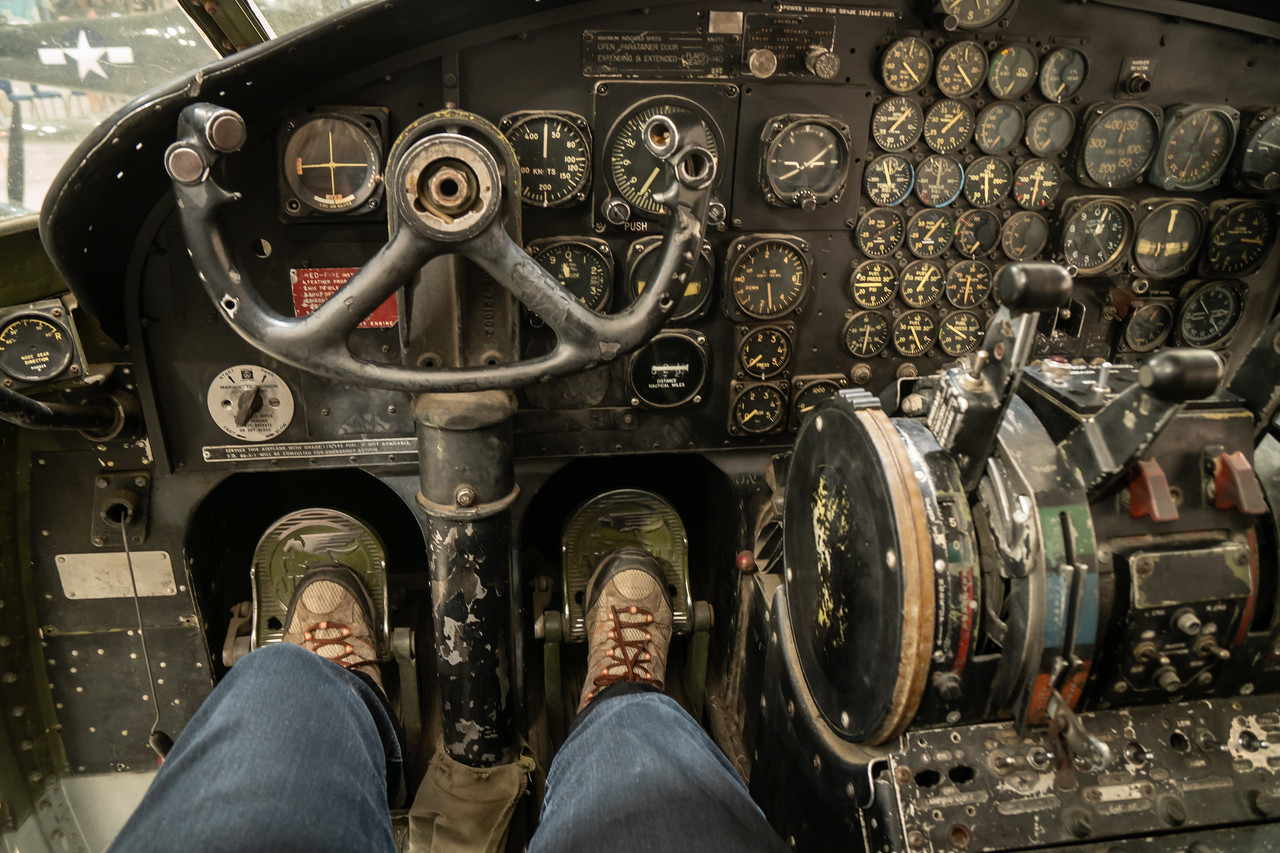 Sitting in the cockpit of a Fairchild Flying Boxcar

To see more images from my time at the air museum, please click here.