How often do you see the stars?  I look out my kitchen window at the predawn sky and am greeted by Mars.  It’s the only thing other than the moon that I can see.  The night sky near a big city like Los Angeles isn’t the same as that of my childhood.   I resolved to do something about this lack of stars, so one night, my daughter and I drove out to Joshua Tree National Park to find the Milky Way.

Into the deeper shades of night

The heading above is part of a quote by Haruki Murakami, and it seemed so appropriate as we drove along into the park.  We pulled off at a picnic area where we saw other cars.  It was my first chance to see the sky rather than the road.

I didn’t want to disturb anyone and kept my lights to a minimum. However, I soon realized they didn’t feel the same way about me as they continued to play with their bright red lights. They were having a good time.  Who was I to dampen their spirits?  Instead, I looked up; the sky was magnificent with stars everywhere!

We moved on down the road and tried again.  This time we simply pulled over and parked which probably wasn’t the best idea.  Even at midnight, there were cars driving along the main road. 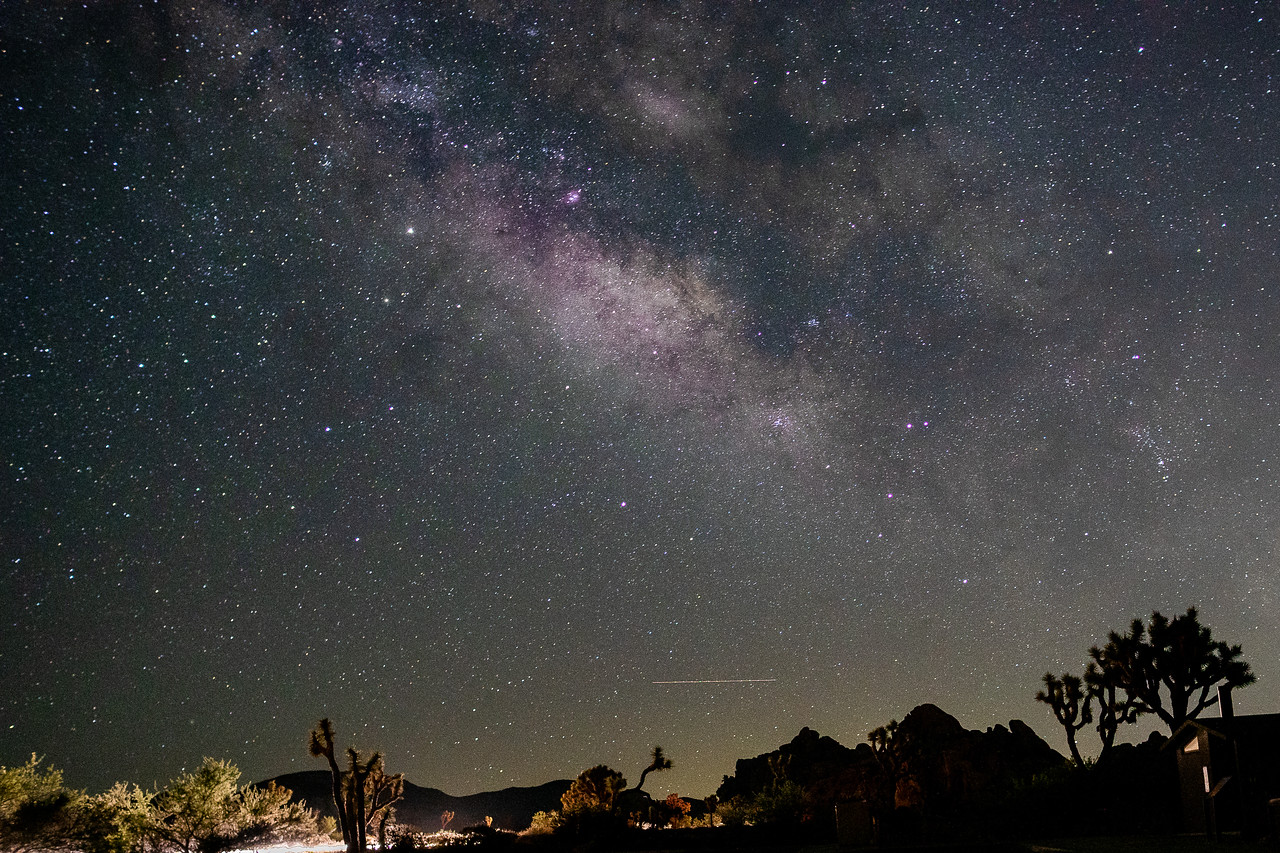 One of our stops, with the usual bright headlights driving on the nearby highway.

This trip was a lark. Given the number of stars I see at my house, I didn’t expect to see much at the park.  I certainly didn’t expect to make any photographs. Sometimes what starts out on a whim, can turn into something good. The stars were so appealing that I could have spent hours just looking up!

We drove around trying different locations.  The sky never changed but the foreground did.

My shutter was slow which resulted in the passing airplane appearing as a series of lights across the image.  There are many planes flying across the southern California sky.  It’s not surprising to find one in my photo.

This adventure has changed the way I approach my day.  I still see Mars each morning, but now I know that the stars are there.  I’ve seen them, Ralph Waldo Emerson’s “envoys of beauty.”  I feel happier now because I know they’re invisibly shining beyond daylight’s blue sky.

I needlessly worried about people and wild animals; neither was a problem.  We did see several small animals skitter across the road. Of course, we also saw two or three coyotes.

The night was totally black.  Joshua Tree doesn’t have lights or buildings or any sign of civilization.  If you go there, be prepared with a small flashlight.  And don’t drop anything!

This was my first visit to the sky here in California.  I intend to do it again.  Next time I’ll go with a tad more preparation and forethought.  I may not choose a Saturday night. Will a weeknight mean less traffic?  I’ll consider my foregrounds and attempt to see what I’m photographing.  I don’t want to invade someone’s party!

My last tip this week is to explore your backyard.  You may not know what you’re missing!