My recent trip to Joshua Tree National Park was the catalyst that set in motion my sudden curiosity about the Salton Sea.  For years I’ve lived completely oblivious to this section of California, but now I felt compelled to see it for myself.  Of course, I chose one of the warmest days in April, with temperatures almost 100 degrees.  Nor did I have a clear idea of what to expect once I arrived.

I drove down along the western side, perhaps not the best route as the lake wasn’t visible for most of the trip.  Nonetheless, I was eager to see the lake and turned off on a sandy road as soon as possible.  Was I trespassing?  Maybe. 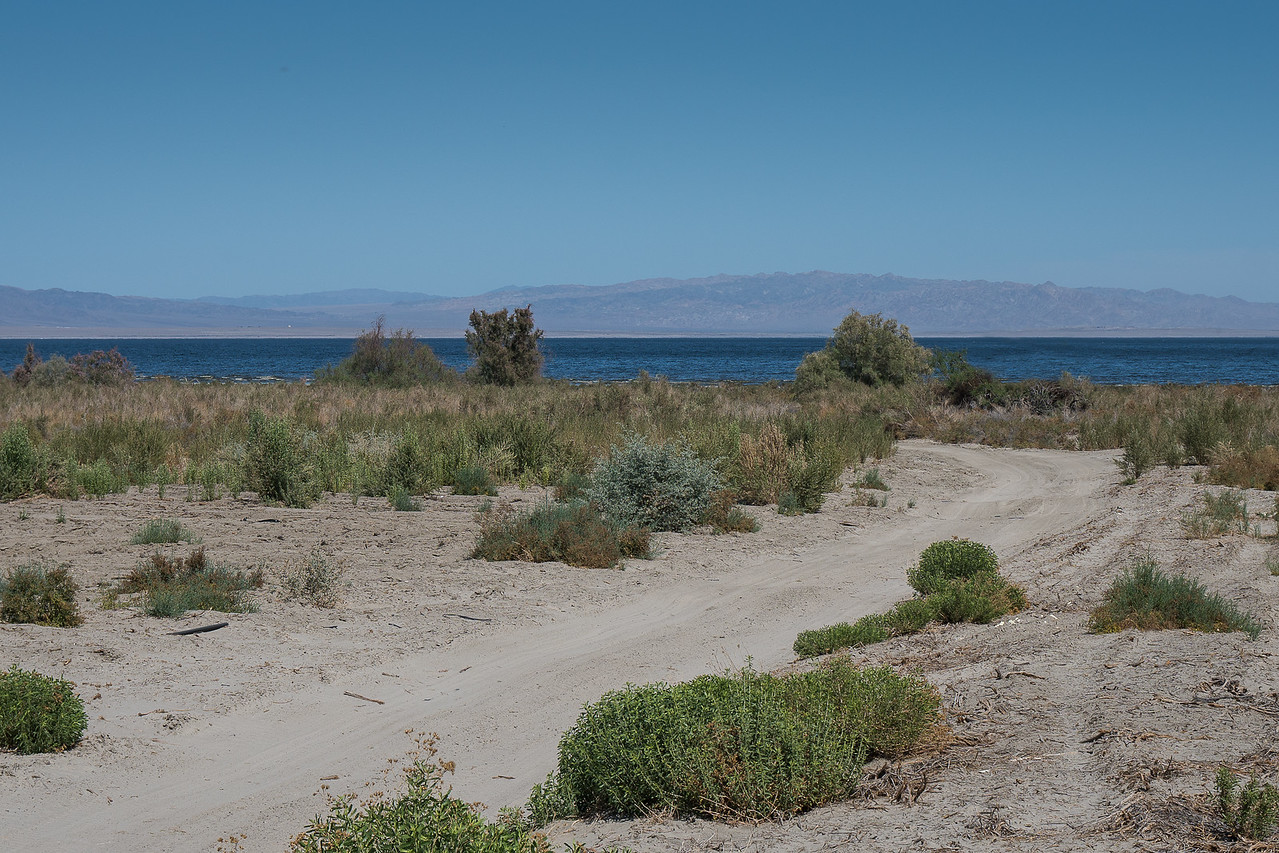 The end of the road, and a glance at the Salton Sea, with the Chocolate Mountains in the distance

The blue color was amazing.  I expected a pale washed-out gray sort of blue.  Instead, I saw this glorious dark cobalt.  The lake may be a bit nasty, but my goodness, it’s pretty.

The Salton Sea isn’t a sea but a lake, California’s largest lake, and is located in the Colorado Desert east of San Diego.  This area between mountains forms a wide valley, once an ancient lake.  Unlike most lakes, the water in the Salton Sea doesn’t have an outflow point.  Rivers flow into it, but the water cannot get out, except by evaporation.  The main source of water was the Colorado River.  As water resources became an important commodity, the Colorado’s water was diverted elsewhere and the lake has slowly diminished.  Salinity increased and now the Salton Sea is saltier than the Pacific Ocean.  Periodically, the fish die off and wash ashore.  I found one such spot the next morning.  It isn’t a pretty picture. 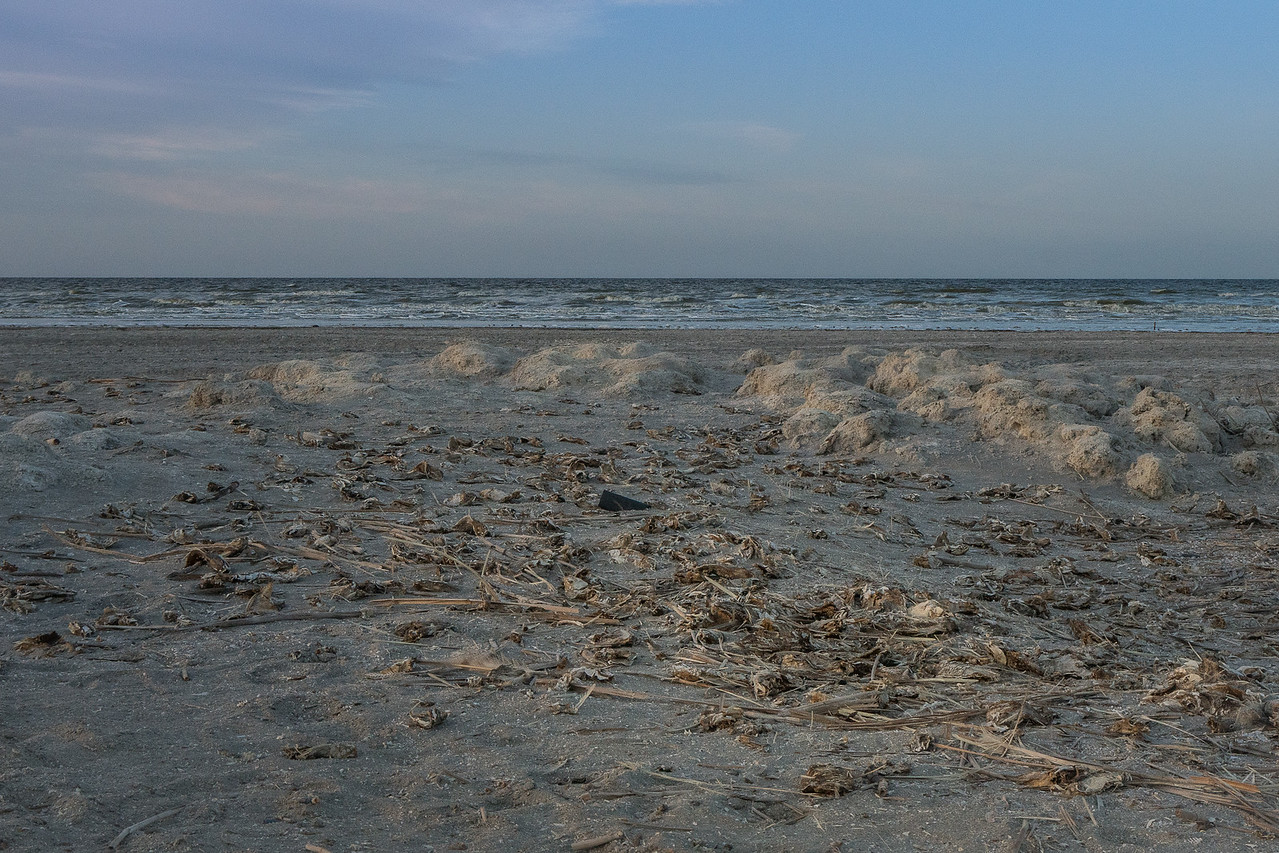 Dead fish collect on the shore at Bombay Beach, the Salton Sea

A once bright future for the lake has turned rather bleak.

Before this becomes too sad and dreary, let me say I had a great time!  I explored the area and discovered what I could.  During my first day, I stopped at Salten City Beach, but this little town seemed closed.  The beach area certainly wasn’t open.

It looks as if there was a dock or something in the foreground of the above image.  The shore is far from this point, which illustrates how the lake as evaporated over time.

By the way, it was very windy when I shot the above photo.  The wind was gusting out of the west and, as I drove south, the sand was blowing everywhere.  The horizon turned brown.  What a day! 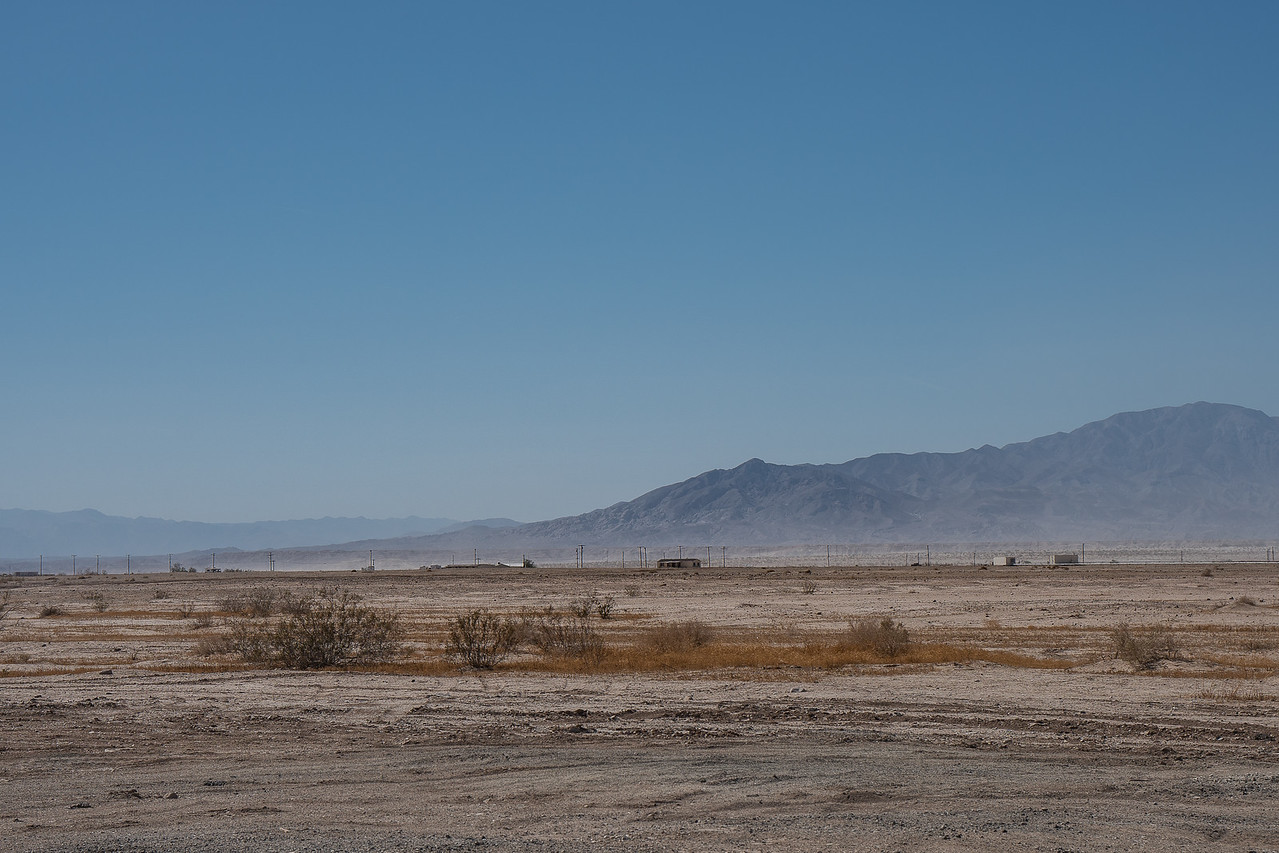 Vast empty places with dust blowing across the road.

The desert just seems to go on and on with only the highway to break the line of sight.  Coming from the Los Angeles area, were concrete and traffic are the norm, I found this emptiness very strange.

I drove home the next day taking CA-111 toward Bombay Beach and on toward the State Park.  Once again I was struck by the vast flat expanse. 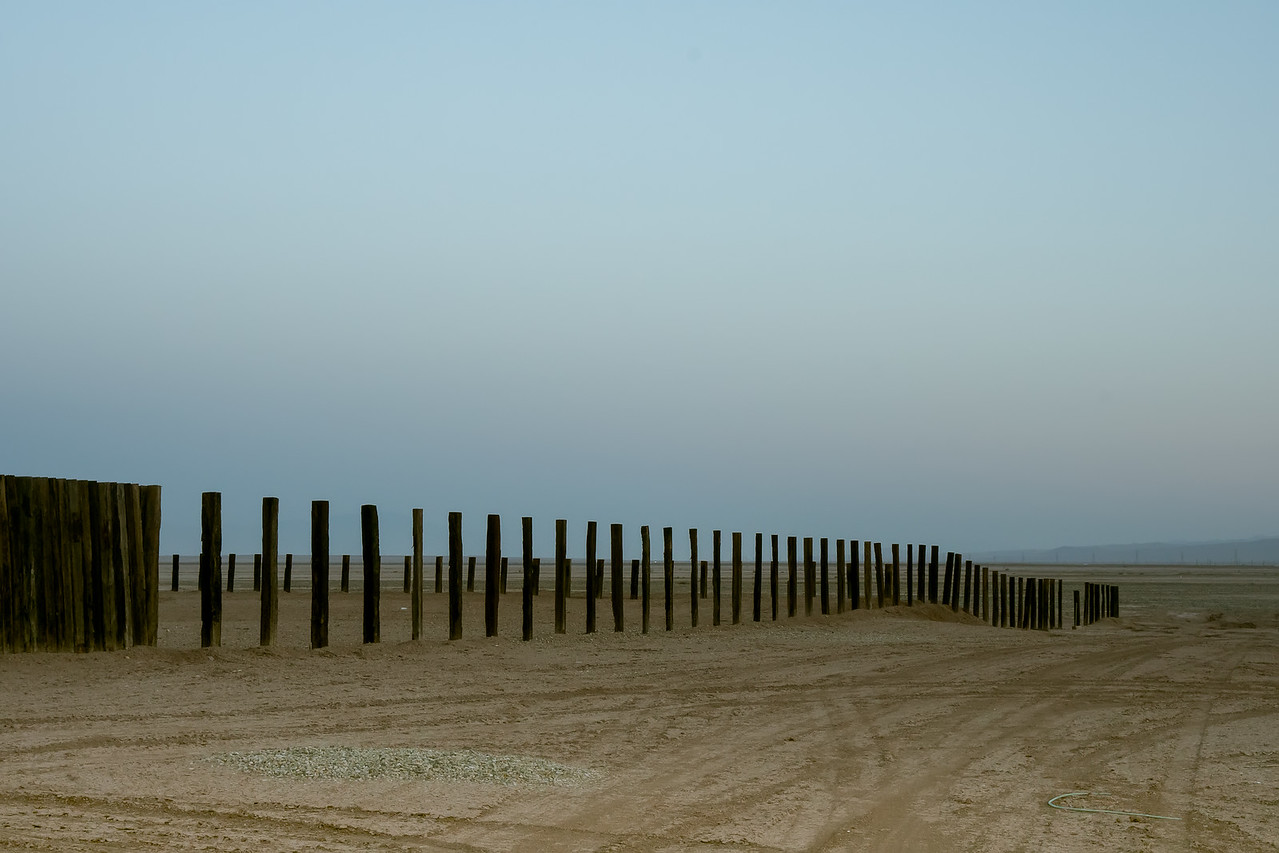 Wide-open spaces near the Salton Sea

I consider this trip a scouting expedition in preparation for my next visit.  I”ll focus on the eastern route next time.  The railroad tracks run right along CA-111 and long freight trains are often seen in this area.  It’s a great chance to photograph trains!  The lake itself is an important stop on the Pacific flyway for migratory birds.  While it may not appeal to us, the lake is important to birds like the California Brown Pelican.  There are also plenty of old buildings, abandoned settlements, and rusted cars. 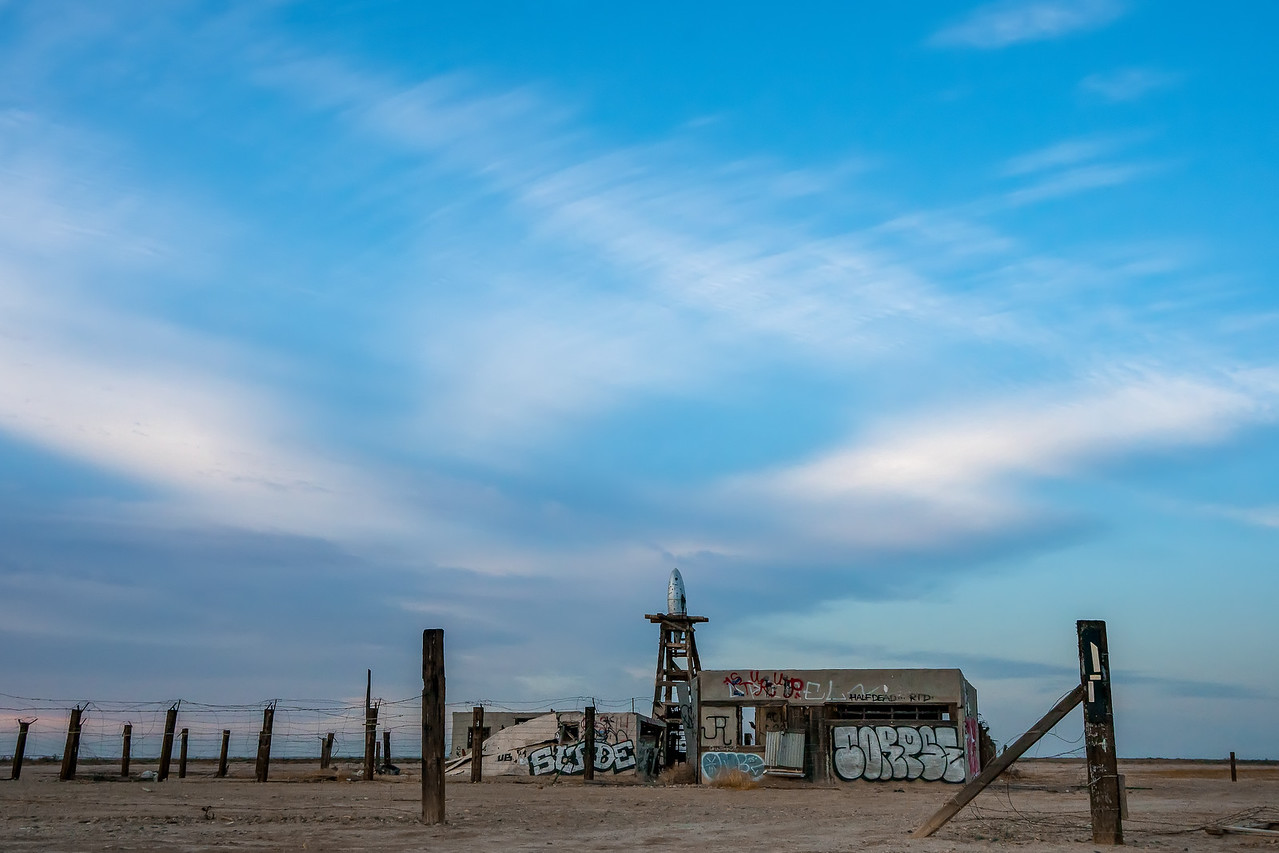 Abandoned building on CA 111 along the Salton Sea

I liked the sky in the above image.  All that expanse of blue and clouds was irresistible.  Oh, and the lake is somewhere behind the building.   There isn’t anything else nearby, so I kept the building small to give a feeling that the world is vast out here.  Because it is.

To see more photos from my drive around the Salton Sea, please click here.