My recent adventure took me out to the desert again, this time to the western edge of the Mojave and a little town called Boron.  This is the home of the Rio Tinto Borax Mine.  The former name may be more familiar–the U.S. Borax Boron Mine.  If that still doesn’t ring a bell, think about Twenty Mule Team Borax.  If you’re a television junky, you probably have heard of Death Valley Days.  I certainly remember the show which was once hosted by Ronald Reagan.  It was high time I visited the mine.

Planning isn’t my best characteristic.  I had a rough idea where I was headed and a vague notion as to what I would see.  I didn’t expect, as usual, the vast emptiness of the landscape, and I certainly didn’t expect to turn off the highway and discover this industrial complex.

Borax plant near the open pit mine.

I followed the signs, including the quaint speed signs indicating the limit as 37 1/2 mph. Many areas were restricted but I persisted and climbed a slope to the Borax Visitor Center.  This place must be one of California’s best-kept secrets.  It certainly isn’t a tourist trap.

The center has a museum, some outdoor displays, and a view of the mine.  Since I needed a bit of information, I chose to start with the museum.  The first thing I discovered was Kernite.

A small sample of Kernite taken from the mine in 1997

The sample seen above is bigger than my dining room table!  I won’t guess its weight;  it was bright, shiny and impressive.   So this is a borate.  I learned that there are several borates.  Borax, Kernite, Colemite, and Ulexite.  Frankly, these names mean little to me.  I’m not a geologist.  Is there a common element?  Perhaps sodium. boron and sometimes calcium.  Once again, I’m clueless, although I did think it was a magnificent specimen.

The museum isn’t huge, one can see it all in an hour or so.  It talks about geology and about the processes involved in mining and refining the minerals and provides examples as to how borax is used today. 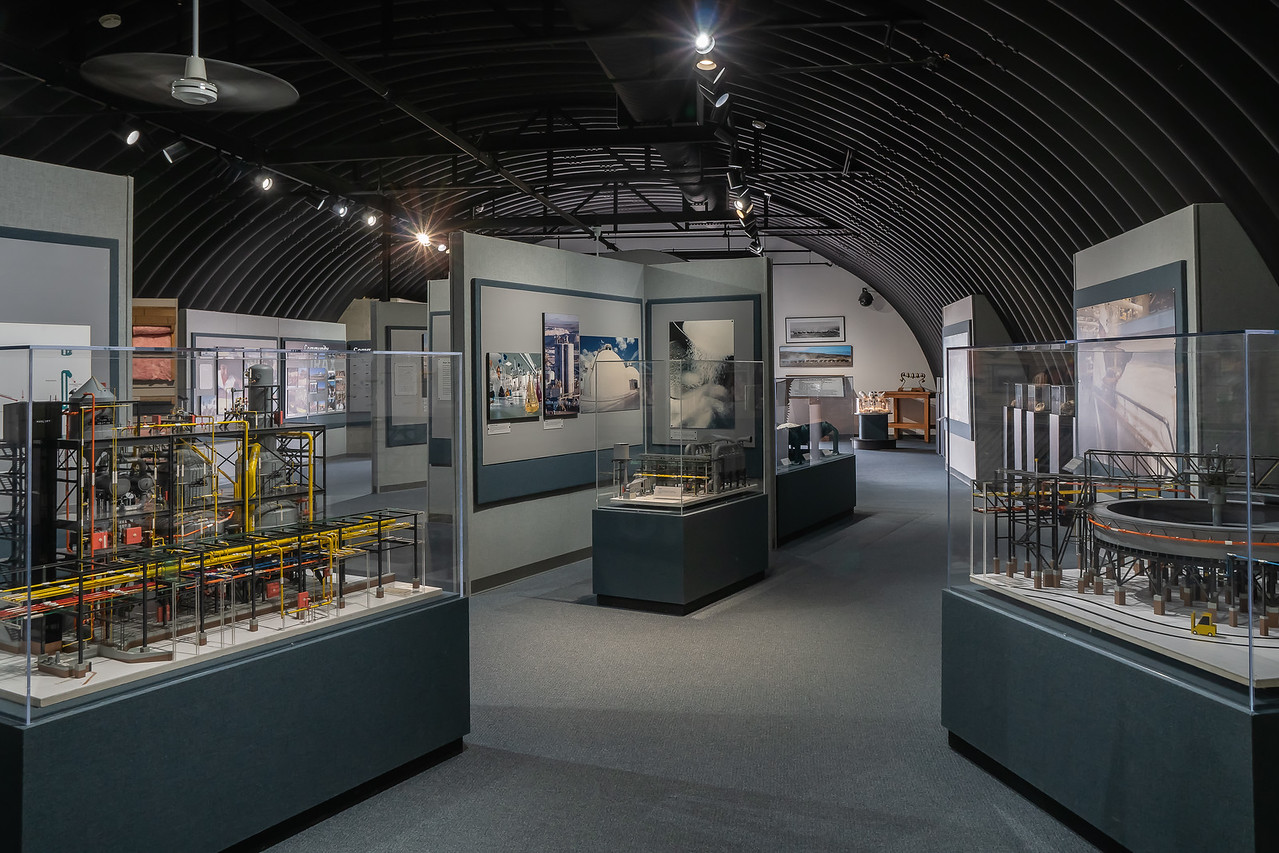 A portion of the Borax Visitor Center

I enjoyed wandering about the cases and trying to figure out the refining process.  As you can see from the above photo, I had the museum to myself and therefore took my time.

The Crusher was intriguing and I worked hard to get a photo with very few reflections.  There was a sign that explained the process. 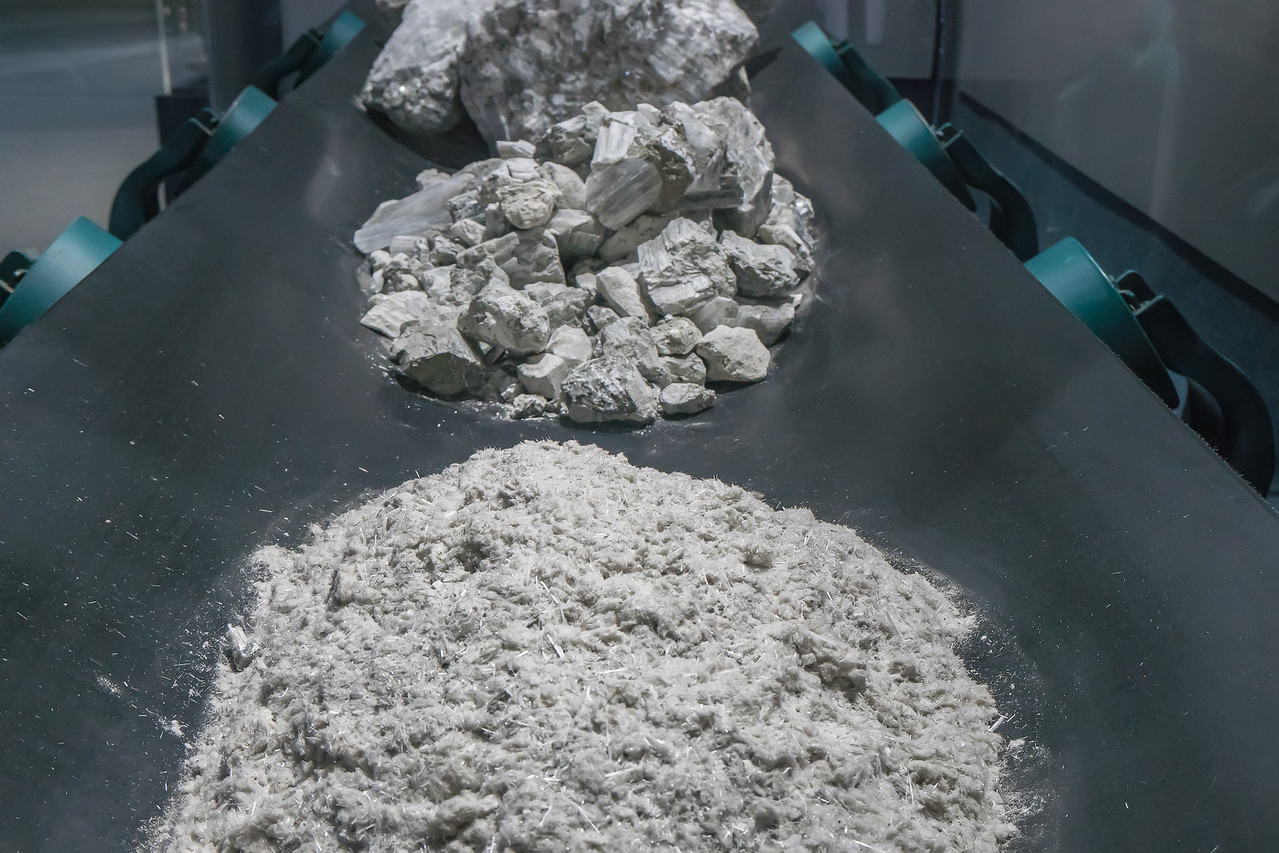 I’ve concluded that borates are crystalline.  That’s are far as I can take the geology portion of this story.

My real interest in the Borax Visitor Center was the mine, the largest open-pit mine in California and, according to Wikipedia, the largest borax mine in the world.  As soon as I had seen everything I possibly could indoors, I hurried out onto the roof of the building to see this wonder. 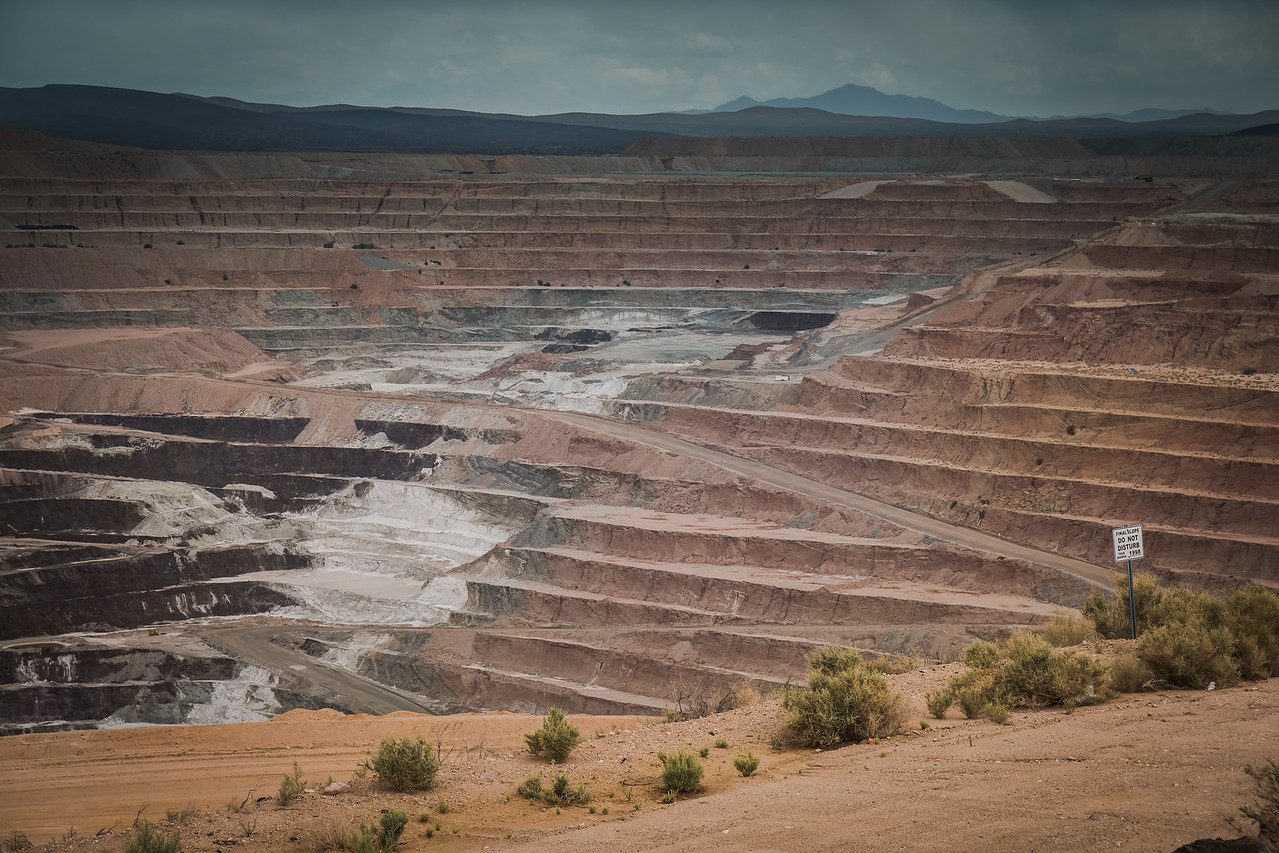 Open-pit mine next to the Borax Visitor Center

It’s hard to get a feeling for the size from the above photograph.  The attendant in the center said something about the pit being two miles across, but I can’t verify that number.  Instead, I went to NASA.

NASA Photo of Rio Tinto facility and open-pit mine near Boron, CA

The NASA photo was taken by an Expedition 37 crew member on the International Space Station.  I am using it to help give a notion as to how large the mine is.  The mine dominates the center of the image, with just a handful of buildings along the bottom edge, pointing toward the right-hand corner.  That’s the plant I saw when entering.   (I’ve added to an arrow)

But not everything is big.  There was one display that maintained the historic tradition, the twenty mule team. 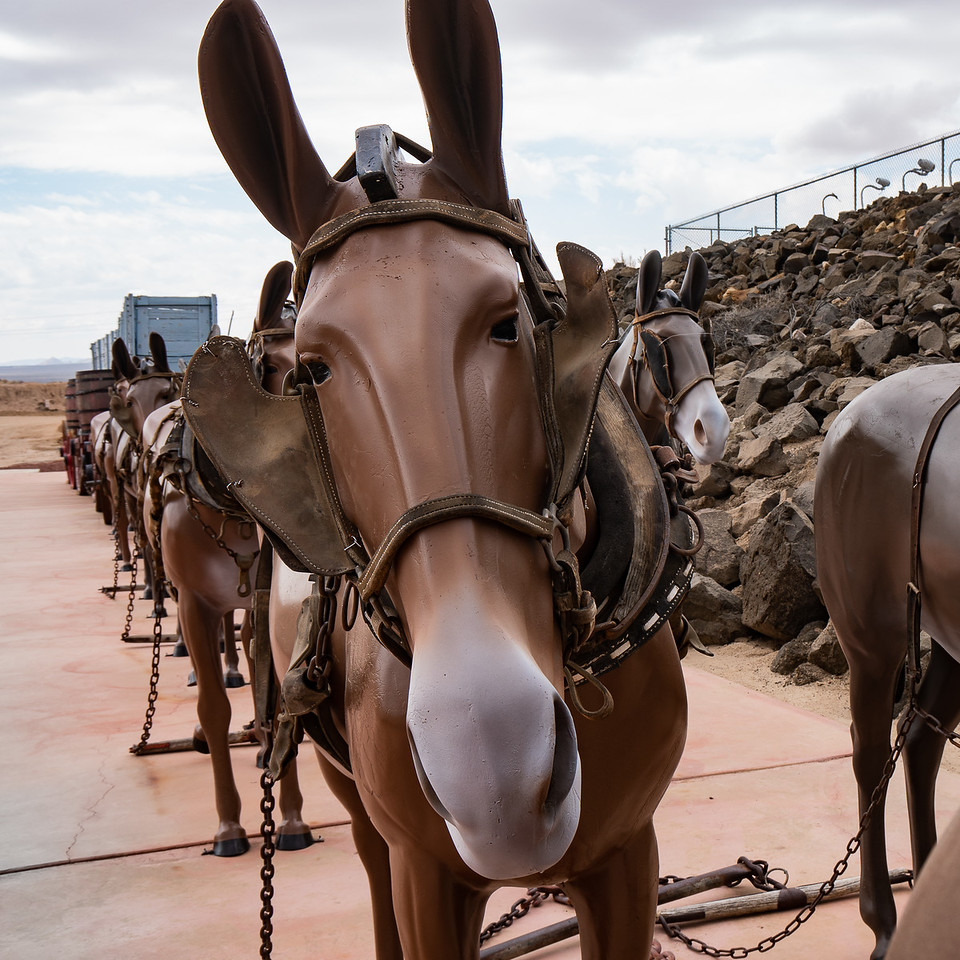 Life as one of the team, pulling borax from the mine.

I liked the expression on the face of this one.  He may be about halfway along the team.  This is a large display!  Borax was originally mined in Death Valley and the mules hauled wagons of ore for a five-year period (1883 – 1889).  I had forgotten the connection between borax and Death Valley.  Part of the museum speaks to this in depth.  Did you know that Borax built the Furnace Creek Inn?  I may have to stay there just for the historic significance.

Whether you like mules, old TV westerns, or geology you may want to consider a ride out to Boron and the Borax Visitor Center.