Every April for twenty years or so, the Los Angeles Times has sponsored the Festival of Books.  Twice I’ve written about it and included photos of the crowds, the vendors, and the various booths and tents.  This year I focused on something different. In 2018 my visit kept me near the writers.

Books, plays, histories, and all manner of printed word are on display at the Festival of Books, the largest book fair in America.  Whether one has self-published a novel or has a big-name corporate account, as a writer you may find yourself here in Los Angeles signing books and talking to your fans. 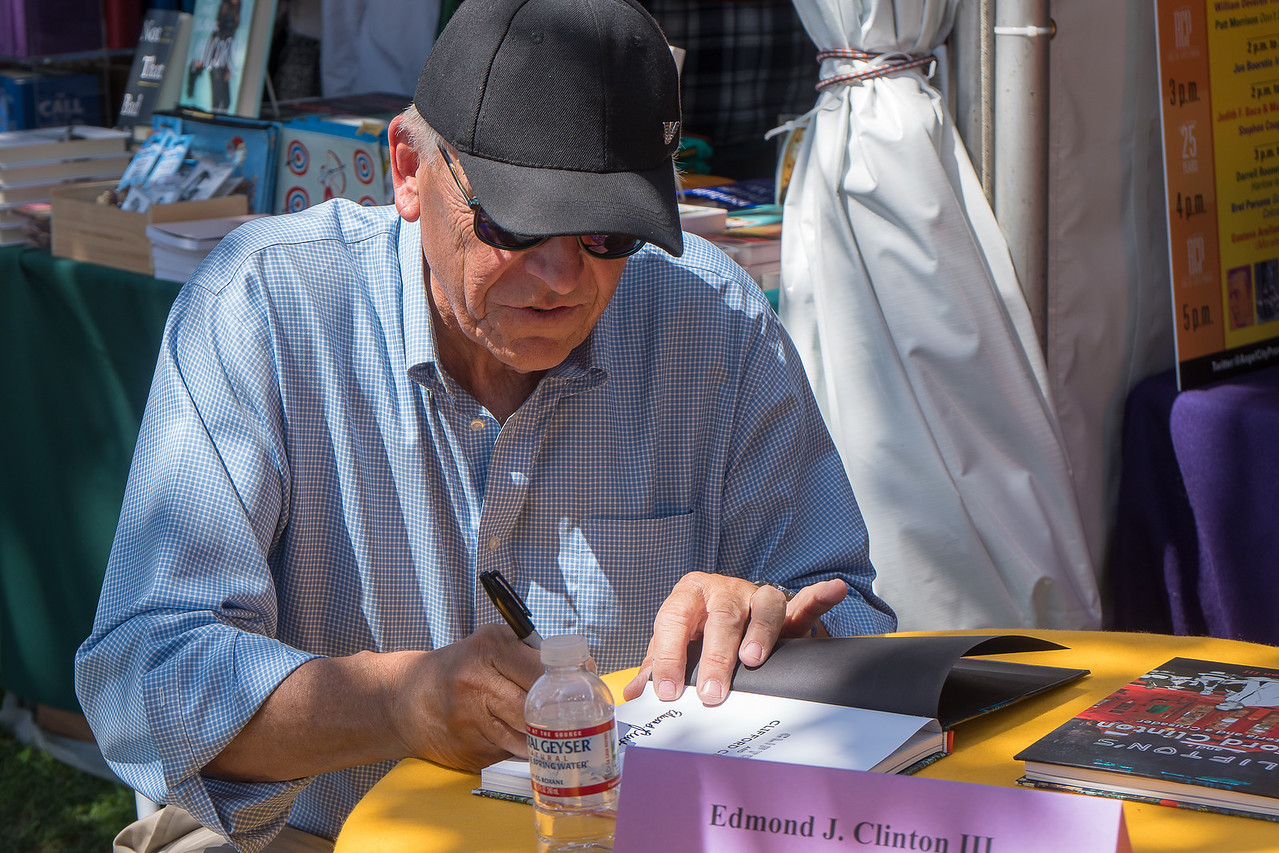 Edmond J. Clinton III signs his book for a fan.

The above image may require a bit of explanation.  During the Great Depression, Edmond Clinton’s grandfather, Clifford Clinton, opened a cafeteria in Los Angeles.  Clifton’s became a landmark in the city.  Mr. Clinton’s book is the story of the cafeteria and the man who created it.  I’ve heard of Clifton’s but never seen one.  Hmm, I may have to go exploring!

I don’t know what it is about books; I find them irresistible.  There are plenty of stalls offering a book for $5.00 or four for $15.00, but don’t quote me on those numbers.  I’m simply giving you an idea as to how to catch a bargain.  Thank goodness, I managed to detour around those dangerous places this year!  Instead, I concentrated on established bookstores.  Some are local booksellers and others represent stores that I probably won’t visit because they’re too far away.

Perhaps it’s the neatness of the stacks that gets me.  You just want to pick up several of those brightly colored volumes.

I enjoyed seeing an old Remington Rand portable typewriter.  A young woman was letting children take turns typing.  They seemed hesitant at first but quickly were pecking away spelling out their names and other short notes.  I remember typewriters but now one never thinks about them. 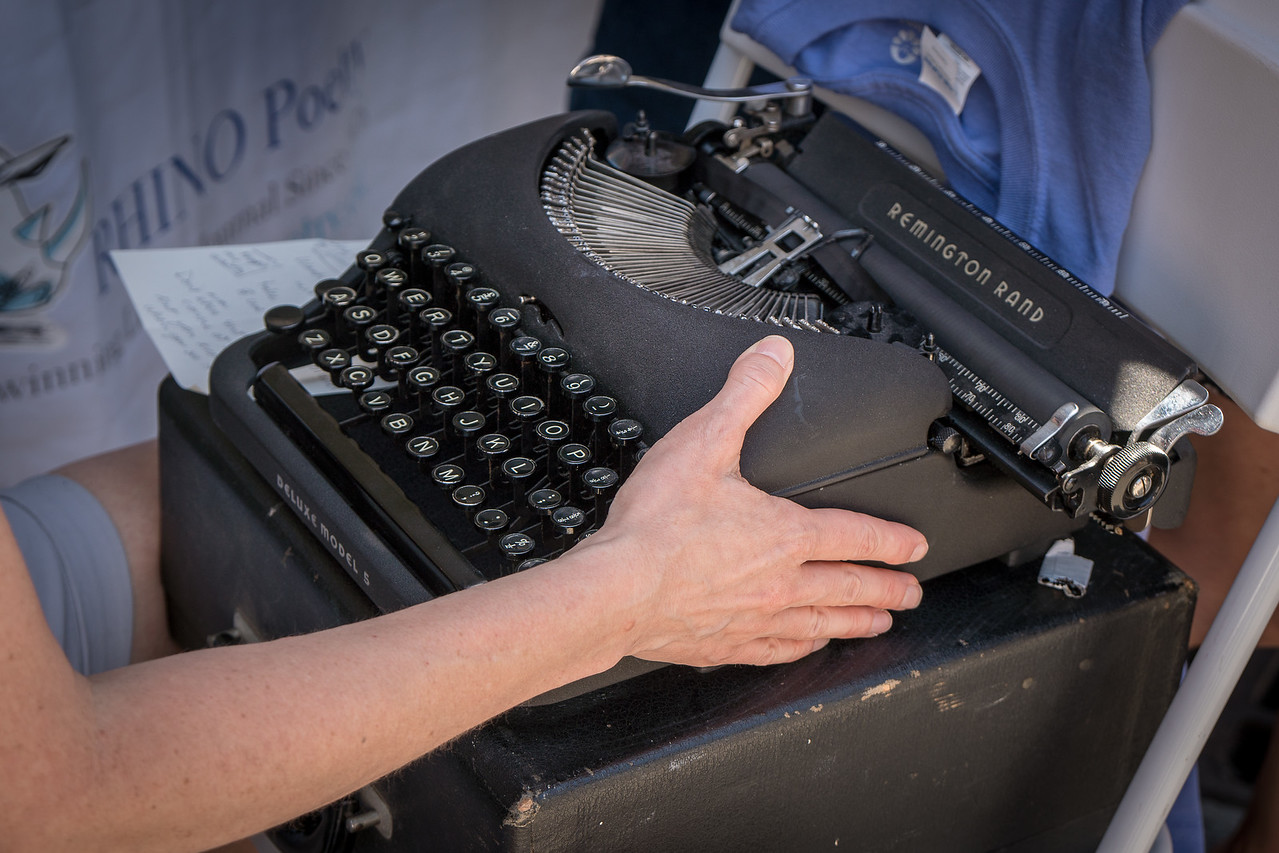 Remington Rand typewriter on display at the Festival of Books

Makes you want to give it a try, right?

The Festival of Books is about having a good time.  This goes for the attendees, of course, but also for those who write the books.  I like this image of a quiet moment at that signing counter of Mysterious Galaxy Bookstore. 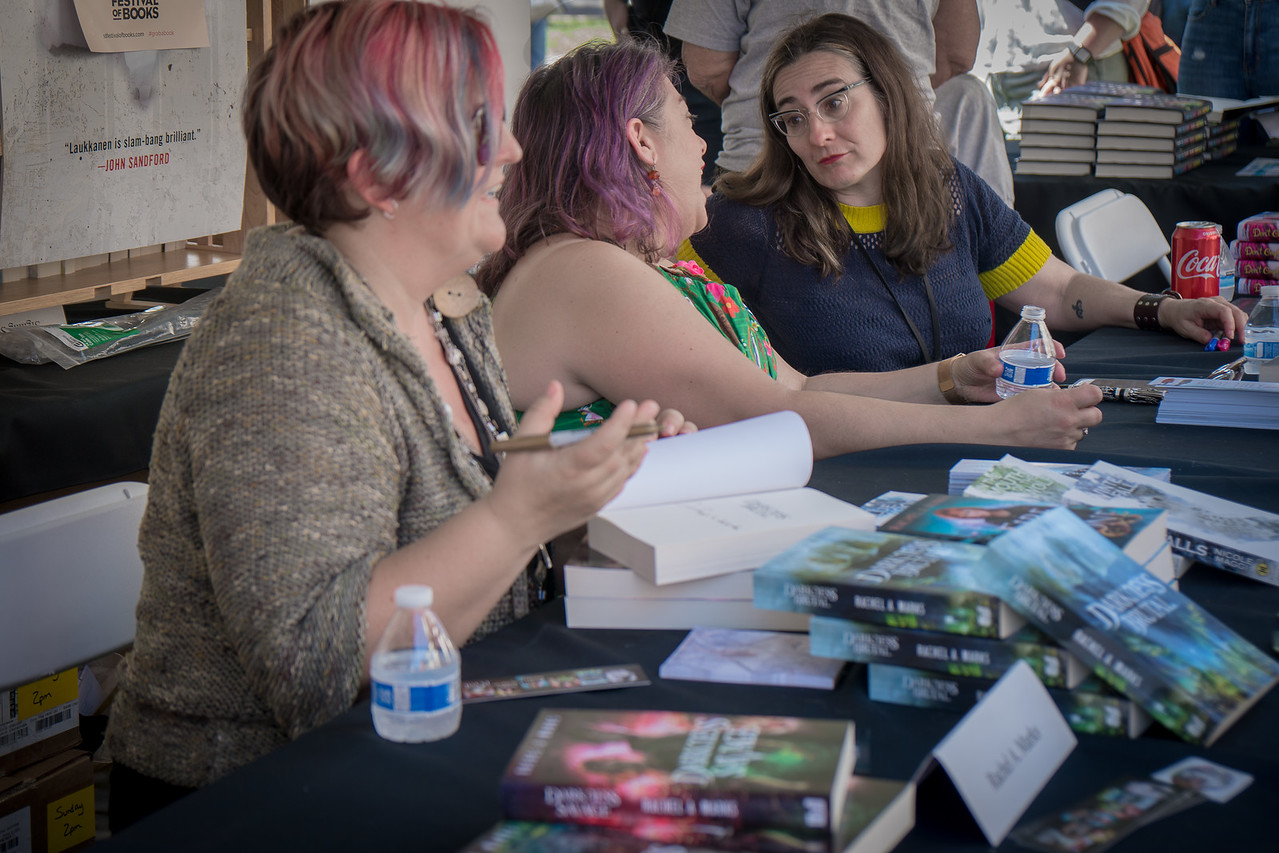 Rachel A. Marks, Nicole Maggi, and Cecil Castellucci having a chuckle or two while signing books.

I can’t tell if there’s a serious discussion taking place or not.  One person is getting a book signed and everyone seems happy.  What more could one want?

The Festival of Books is over for 2018, but there is always next year. So mark your calendar and plan to visit the campus of USC.  It’s a lovely place and a great way to spend the day.

If you would like to see a few more of my photos from the festival, please click here.