Whether you think him a barbarian or a statesman, Genghis Khan’s name lives on through the centuries.  Frankly, I never learned much about him in school so I was happy to see that the Reagan Presidential Library was featuring a special exhibit dedicated the life and legacy of this enigmatic figure.

A sense of history

Just to bring you current, Genghis Khan was born in 1162.  At that time, Europe was a combination of feudal states.  The Magna Carta wouldn’t be signed until 1215.  If that is meaningless to you, think about the time of Robin Hood.  King Richard I, the long-awaited good king in the Robin Hood stories, reigned England from 1157 to 1199.

The young Genghis Khan was known as Temujin.  His early childhood and adult years were violent due to constant fighting between Mongol tribal clans.  Life was difficult and one’s future uncertain.  Temujin gradually rose to power through various wars with other tribes.  The exhibit at the Reagan Library goes to great lengths to illustrate life in Mongolia in the 12th Century.

The tribes were great horsemen, living nomadic lives on the Central Asian plains.  They traveled and lived in portable dwellings called a yurt or ger.

Interior of full-size ger on display at the Reagan Library

The bits of bone, seen on a rug on the floor, belong to the tribe’s shaman.

A nomadic life doesn’t necessarily lead to world domination.  What made the Mongol forces so strong?  As I mentioned above, these folks were skilled horsemen; an army of cavalry could move quickly. They also had a great bow.  Handcrafted, these bows had a unique shape.  The tips curved outward away from the bowman.  The bow itself was a composite of wood, birch bark and iron.  The force of the pull was much greater than European weapons.  A video at the Library said the range for a Mongolian bow was 150 yards.  These weapons were fired from horseback.

Models showing full armor for both man and horse!

The rider could take advantage of the horse’s armor and tuck down along the side of the horse to let fly his arrow.  They did all this while at full gallop!

No one doubts the prowess of the Mongols. They captured an empire the size of Africa!  They obviously knew how to fight.  What surprised me was the other things, the civilizing things.

In retrospect one of the greatest achievements was the Silk Road.  No, they didn’t build it, these routes existed for centuries. The important thing is that the consolidation of empire meant secure routes between East and West thereby facilitating trade and communication.   This meant that Mongol ingenuity transferred to Western culture.  The Venetian adventurer, Marco Polo, made much of these routes during his time in the East (late 13th Century) as tea, silk, porcelain, perfume, spices, paper, and gunpowder traveled to the West.

Other practical ideas survive to this day.  The pony express is one.  Isn’t it only logical that a country dominated by the horse would figure out how to use horses for communication?  Marco Polo marveled at the system of way stations and riders dashing in to grab fresh mounts before heading on their way again.   Genghis Khan also established passports.

As the leader, Genghis Khan provided his people with a code, the Yasa.   In battle, his armies may have killed hundreds of thousands of people, but throughout his empire, he granted religious freedom.  He believed in a meritocracy.  Civil servants were hired based on ability rather than family connections. He also devised a system of diplomatic immunity.  “Kings do not kill envoys,” is part of the Yasa.  The list of achievements and their impact on us is long.  To truly appreciate it, take a drive out to Simi Valley and visit the exhibit for yourself.  It will be in running through August 19, 2018.

Here’s one last image.  At the exhibit, this is the first thing one sees. 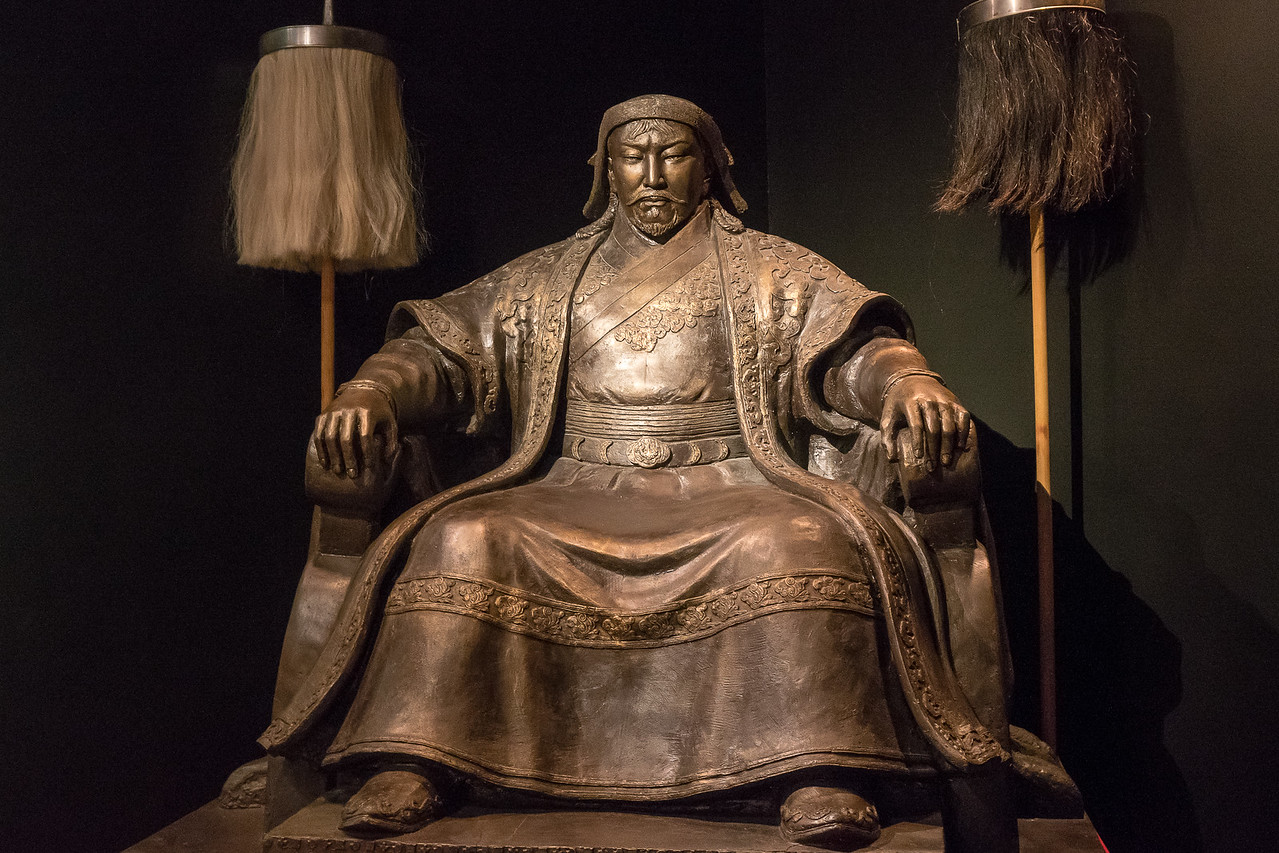 Replica of the bronze statue in Sukhbaatar Square, Ulaanbaatar.  This is one-sixth the size of the original that resides in front of Government House.

Here is one last quote, this about leadership.  “If you sincerely aim at the prosperity of the people, you will keep your power.”  I hope you get to the Reagan Library and have a chance to judge for yourself as to the character of the man.

To see more photos from my visit, please click here.