Sometimes you just have to tell yourself to be brave and to go out and do something new.  I followed my own advice recently and went to the mountains, Mt. Baldy in particular.  It’s rather ironic that I live right here up against them, but never travel into them.  Over and around?  Oh yes, I’ll do that but never do I take that short drive up the road.

We’ve had a nippy winter so far in Southern California and recently we had a week of rain.  That means there’s snow in “them thar hills.”  I decided to go see it.

A twisting paved two-lane road leads up to Mt. San Antonio, known around here as Mt. Baldy.  Jem, my dog, and I drove up from the town of Upland which is more or less right next door to us.  As we left the the San Antonio Heights area of northern Upland there wasn’t any snow on the ground but we did see our destination in the distance.

We’re headed for that snow!

Are we really going to drive that far up?  If not, will we find snow lower down?  The only way to find answers was to keep going.  Just for the record the roadside vegetation still looks pretty dry and the risk of fires is still high.  The California drought isn’t over yet.

At about 4000 feet we drove through Mt. Baldy Village.  The road kept climbing and so did we.  This area would require chains if there had been a recent storm.  Luckily we waited till the pavement was dry.  We breezed on up the mountain to about 5000 feet where the road ends and the skiing begins.  I parked and let Jem have his first try at ice and snow.  He slipped and fell, but I didn’t take a photo of it.  That would be cruel.

One thing that interested me was the juxtaposition of the desert plants and the white snow.  Just what kind of place is this?  Nestled along the roadside were the spiky yucca-like plants.  They may even be yucca for all I know.  I’m not good at identifying the local flora.  I just didn’t expect them to exist in snow.

Yucca in the snow?

Jem had a little walk in the snow; he wasn’t too impressed, and we headed back down to the Village.  Things were cozier here.   The Mt. Baldy Lodge Restaurant looked warm with its wood and stone décor and the smoke swirling out the chimney. 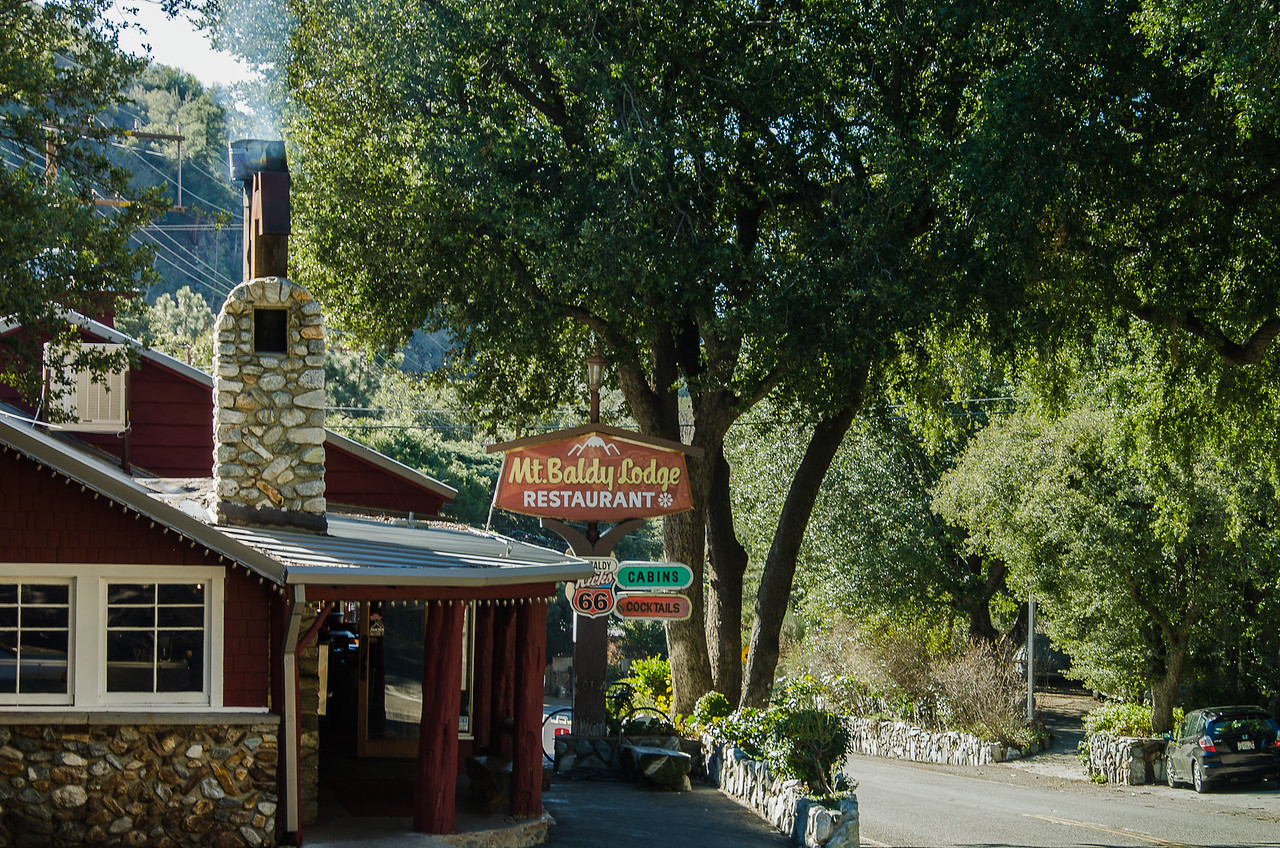 Alas, dogs aren’t allowed inside so we headed on down the mountain toward home.  The valley below was covered by haze.

The valley covered by haze

Was the adventure worth the two hours it took out of my day?  Absolutely!  It was wonderful to see the snow and feel the bite of the frigid wind.  And it was indeed chilly up there, about twenty degrees colder than down here.  I think I’ll try it again after a more recent snowfall.  Not sure about that chains business, but there’s always a new experience just waiting in the wings.