For those of us living in Southern California, late spring is a lucky time to be a resident because it’s the time when the Jet Propulsion Laboratory has its annual open house.  A couple of weeks ago, my family and I made our third visit to JPL in Pasadena.  We had a remarkable time exploring the campus.  I present to you my five reasons why you, too, should give this a try.

I’ve probably mentioned this in earlier stories about JPL, but I’ll say it again.  The JPL Open House is a great place for kids.  Children are curious about everything.  They love robots, and JPL has a terrific robotics program.

How does this work?

There’s nothing like hands-on exploration, is there?  The robot above is called Dasher.  It’s designed to explore the Antarctic ice shelf.  Dasher is one of many robots in the “herd” that will take on this assignment.  He was also one of many robots on display at the open house.

That’s right, the parking and admission to the JPL Open house are free.  You have to reserve a time via an online service.  That reservation will get you admittance.  That’s all it takes.  Where else can you go and talk directly with the people who work on scientific projects?  My family and I met Gary at the Exoplanet building.  He told us all sorts of marvelous things about these remote places.

Gary, from JPL, told us all about exoplanets!

Wow, a free one-on-one, personal guide through the galaxy.  Does it get better than that?  For example, he explained how we name these planets.  Here’s a NASA travel poster. 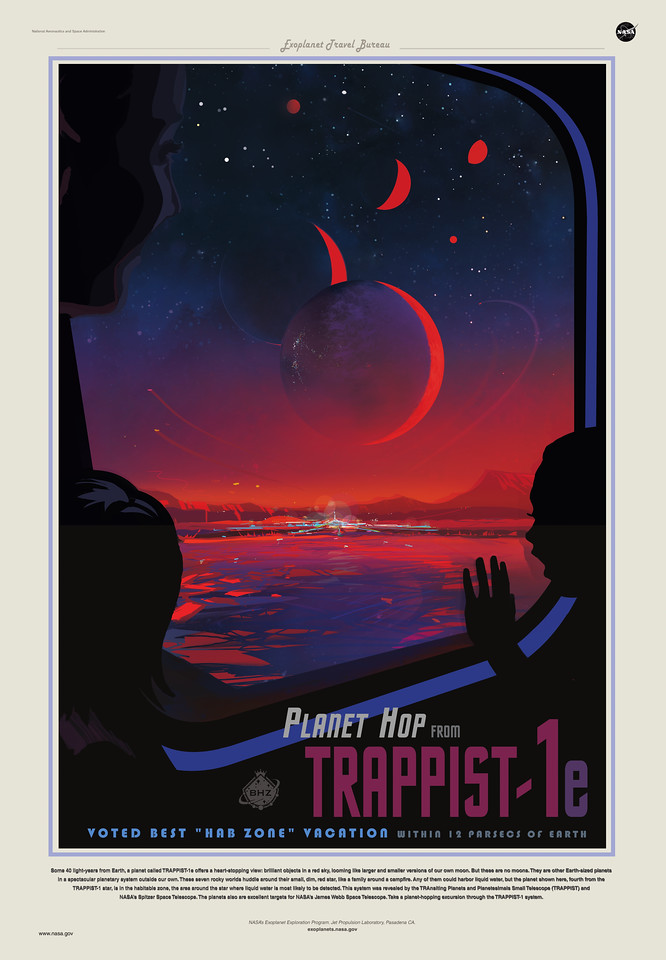 Trappist-1 is the name of the star, and the small letter ‘e’ refers to the planet.  The big objects in the sky are other planets in the system.  In addition, the constellation, Orion, can be seen in the poster.  It’s almost unrecognizable because its two-dimensional shape is different when viewed from the Trappist-1 system.  I learned oodles from Gary!

Did I mention Fun?

How about the excitement of seeing a high-altitude flight suit?  NASA operates an Airborne Science Program (ASP) that flies planes like a DC-8 to gather atmospheric data.  This flight suit was near that display.  It drew a crowd.

The little boy in the lower right corner is waiting to hear how the pilot, bound in the flight suit, will eat and drink.

The little boy is almost mesmerized by this talk.  He’s ready to try the goo in the tubes.  Actually, the stuff is like peanut butter and tastes of applesauce.

The JPL Open House is informative

If by now you haven’t figured out that I discovered all kinds of things during the 2019 JPL Open House, then I’ll try one more time.  The folks at JPL love to talk about their work!  We visited the building related to Earth exploration and how our planet is changing.  We saw several satellite models.  These instruments circle the planet and measure things like soil moisture, or the amount of dust in the air.  One measures changes to ice amd water.  The satellite is called GRACE-FO. (It’s predecessor was GRACE.)

NASA does more than send rockets into space.  Do we still send rockets or do Russia and Space-X handle that sort of thing?  Well, the important thing here is that NASA/JPL is about satellites that monitor the earth.

The shocking thing about that huge block of ice is that it represents only one gigaton.  During the time of the GRACE mission, Greenland lost on average 286 gigatons per year!  That statistic is scary information.  While aghast at the notion of how the planet is changing, I also marvel at how cleverly we discover all this information.  These satellites do amazing things.

JPL is just north of La Canada, off the 210 freeway.  You don’t have to wander through any busy city streets.  It’s a simple exit, and there are always signs pointing the visitor in the right direction.  Caltrans also posts lighted signs on the freeway.  You can’t miss your way.

I hope I’ve convinced you to check out the JPL Open House.  I’m sure it will take place next spring.  I usually get an email early in the year telling me the dates.  After that, I wait for the big day when the reservation site opens.  The event takes place on Saturday and Sunday.  If you’re curious, I suggest you watch for it next year.

To see more images from my visit this year, please click here.