I missed WonderCon last year, and something must have happened in the intervening months.  This year’s event was very different from my expectations.  I’m calling it the WonderCon 2019 surprise fest.

The first big surprise was the queue (or traffic jam) around the Anaheim Convention Center.  Did someone eliminate a parking garage?  Every lot turned us away.  A line of cars, of which we were one, inched along Katella Avenue, hoping for an empty garage. Alas, we had no such luck.  Instead, security sent us to Angel Stadium where we joined a long line of fans waiting for shuttle buses.

I hope they send more buses! We’re going to need them.

There was only one bus when we arrived at Angel Stadium.  Several more soon pulled up, and people moved along quickly.  We had a short walk from behind the Disneyland Resort, but we did get to the Convention Center.

WonderCon is a big event sponsored by San Diego Comic-Con.  It’s easier to get tickets for WonderCon, and that is why I go.  San Diego tickets are a rare commodity.  WonderCon isn’t as huge as SDCC, but it seems to be growing.  They have the usual convention fare: panels, games, cosplay, and an exhibitors area.  My family and I spend the day in the latter.  We roam the aisles looking for bargains and photographing costumes. Since comics are part of this event, I’m pleased to see many vendors selling them.  I was surprised to see these duck comics by Carl Barks, the ultimate “duck man.”

I was a Marvel fan, but my husband loved Carl Barks.

I use the above heading in a tongue in cheek fashion.  Conventions are no longer just about comics.  They include all kinds of fan interests from novels to steampunk, to movies to art.  We prowled the exhibit hall where I discovered a marvelous dress shop called Samiah. 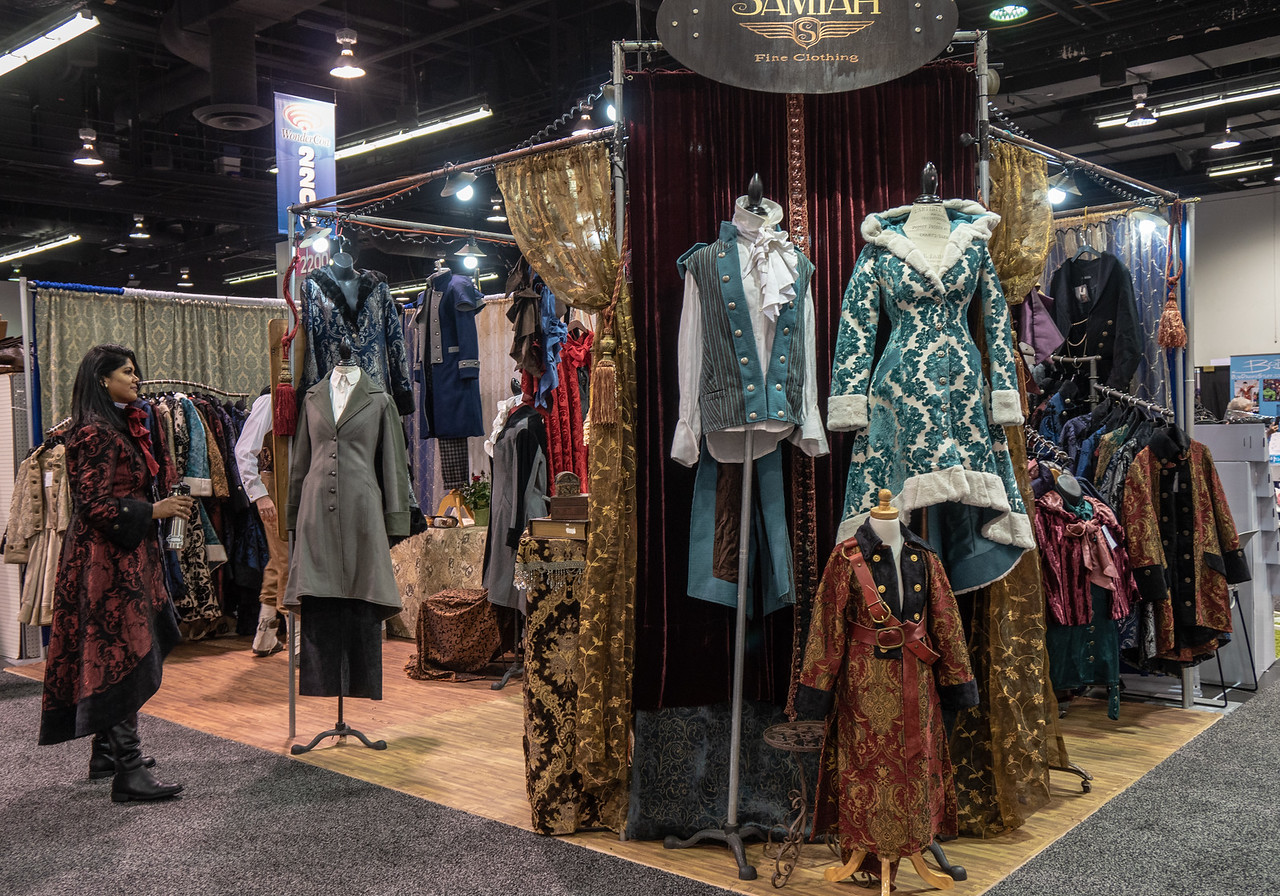 The booth for Samiah vintage designs.

One woman, Samiah, designs these lovely clothes.  I’m sure they are expensive, but they drew attention nonetheless.  Wouldn’t they be splendid for a steampunk event?  Actually, they would be great for any event!

I had forgotten that I was looking for the Comic-Con Museum display.  We stumbled upon it when we saw the black cars. 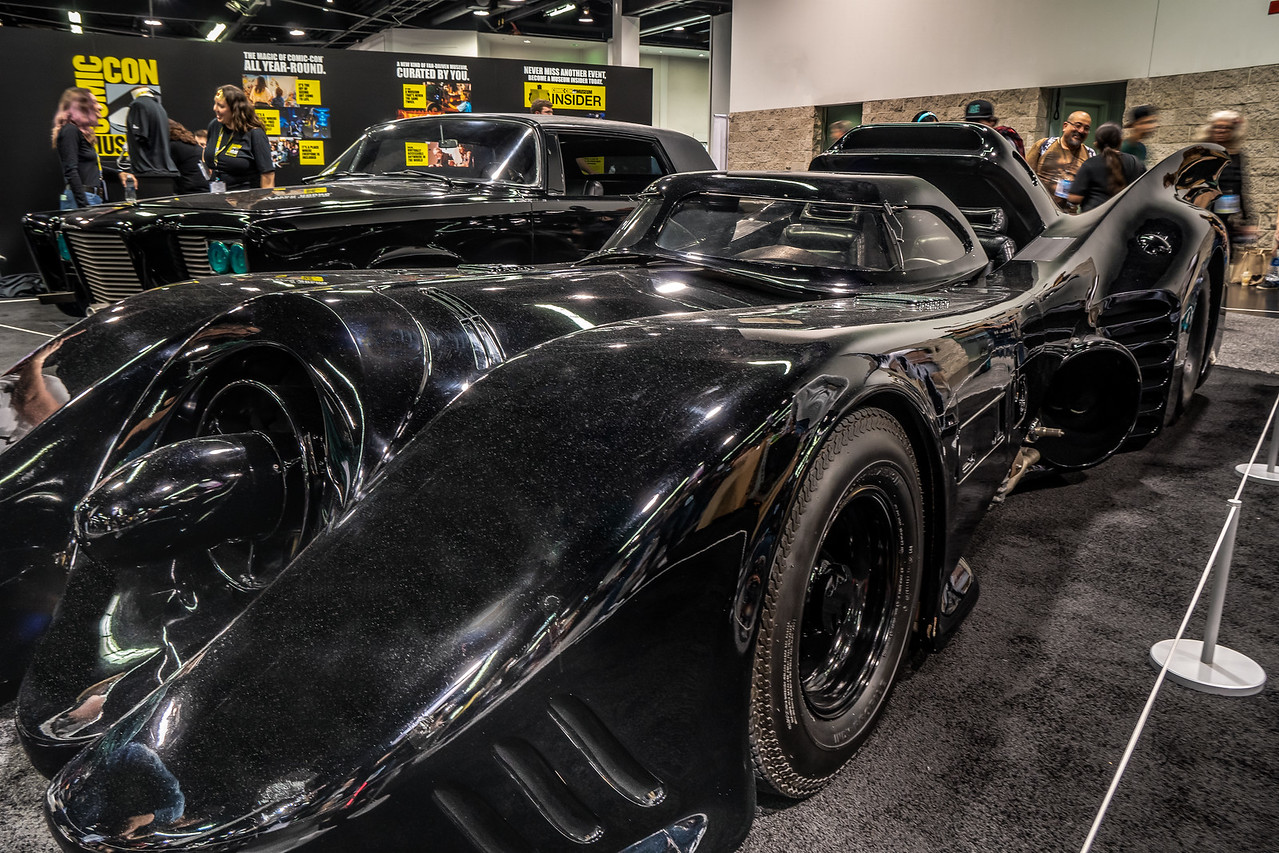 The batmobile and the Green Hornet’s car, “Black Beauty”, on display at WonderCon

In the foreground is a replica of the batmobile from the 1989 Tim Burton Batman movie.  The other car is from the 2011 Green Hornet film.  As for this display, it is a taste of what’s to come.  The Comic-Con Museum is teaming up with the Petersen Automotive Museum to create an exhibit called “Hollywood Dream Machines” which will open in May.  Now that’s a great surprise; I can’t wait to see it!  By the way, that batmobile is 20 feet long!

One of the last surprises of the day was a big one.  We were strolling along the Tribbles booth, hoping to see some microbes.  (Don’t ask, it’s too complicated to explain.)  I was getting tired and not paying much attention to anything when I glanced up and saw Nichelle Nichols. 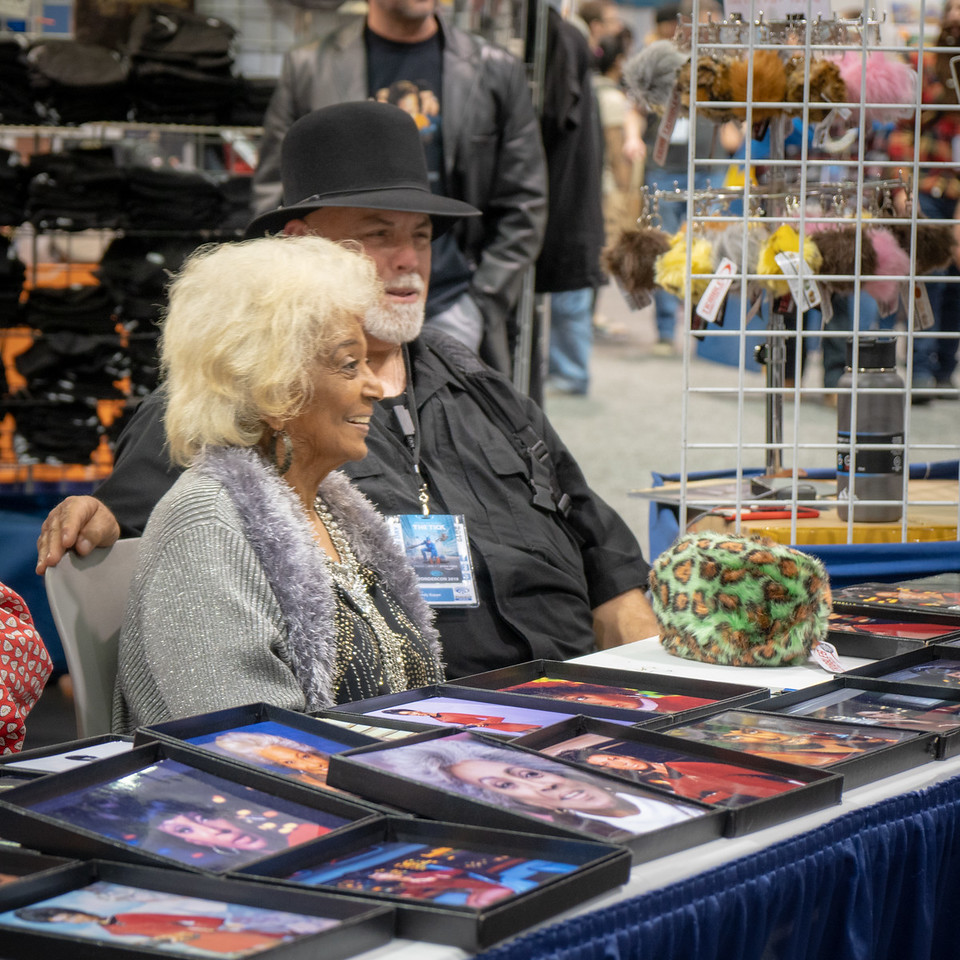 You know I will always have tips.