For the last several years, I’ve lived with the threat of the Big One.  The San Andreas Fault, California’s most famous source of earthquakes, runs roughly south to north the entire length of the state.  It cuts through the mountains at the Cajon Pass, not far from my hometown.  Since we’re practically neighbors, I decided it was time to get a close-up view of this famous fault line, the source of the Big One, and I drove out toward Palm Desert for a tour. 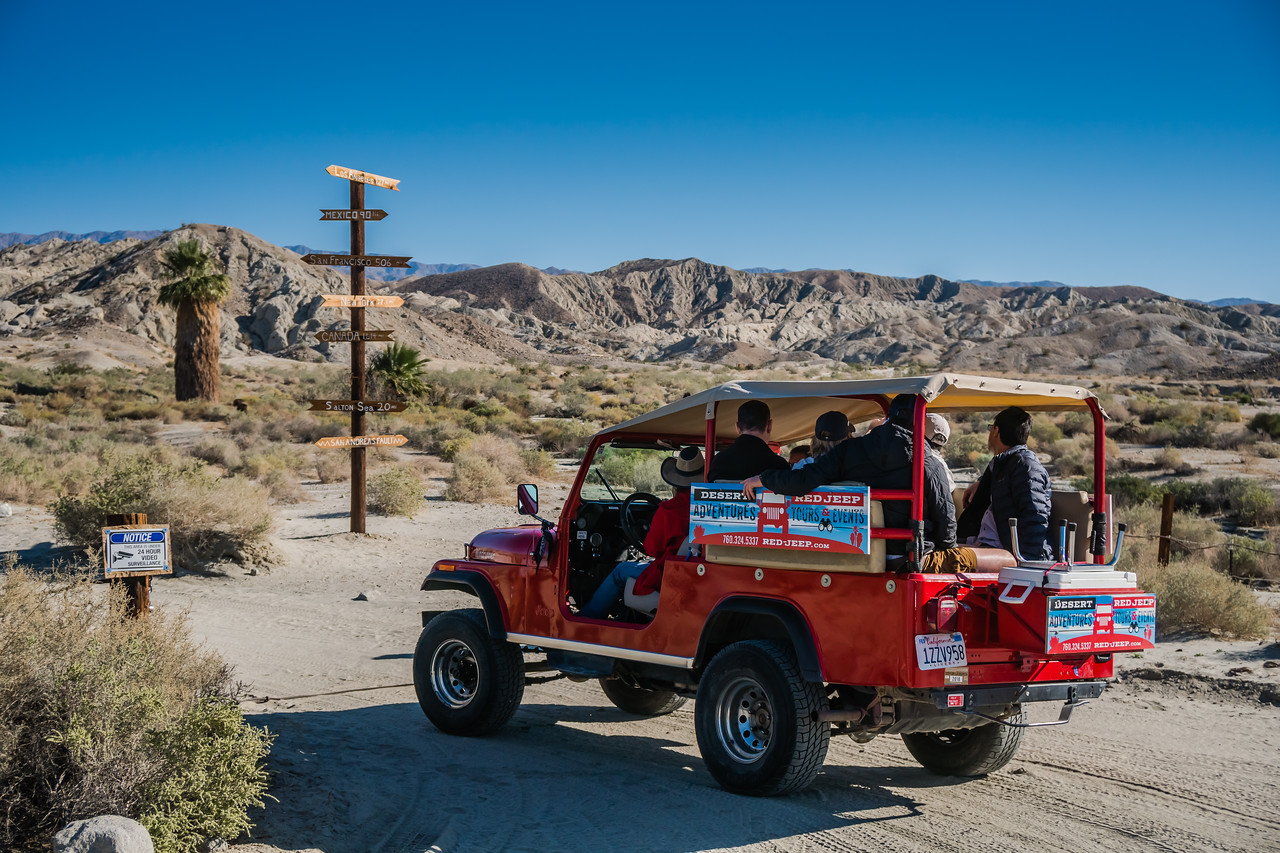 The Red Jeep Desert tour heading off to find the fault!

Our tour took place on private land.  We crossed the above barrier, and made certain we locked the gate behind us!

What do you expect to see when someone says they’re taking you to see a fault line?  A crack in the ground?  A giant split between the two tectonic plates?  The San Andreas was nothing like that.  One can’t see it, but there is evidence of its existence.  In this particular point in the Colorado Desert, the Pacific Plate and the North American Plate are pressing against each other.  The pressure from the plates creates an impermeable substance.  The underground water hits this barrier and rises toward the surface. Eventually, it spills over the Pacific Plate.  Because the water is so close to the surface, grasses and shrubs grow along the plate line.  In other words, there is a green band running along the San Andreas Fault. 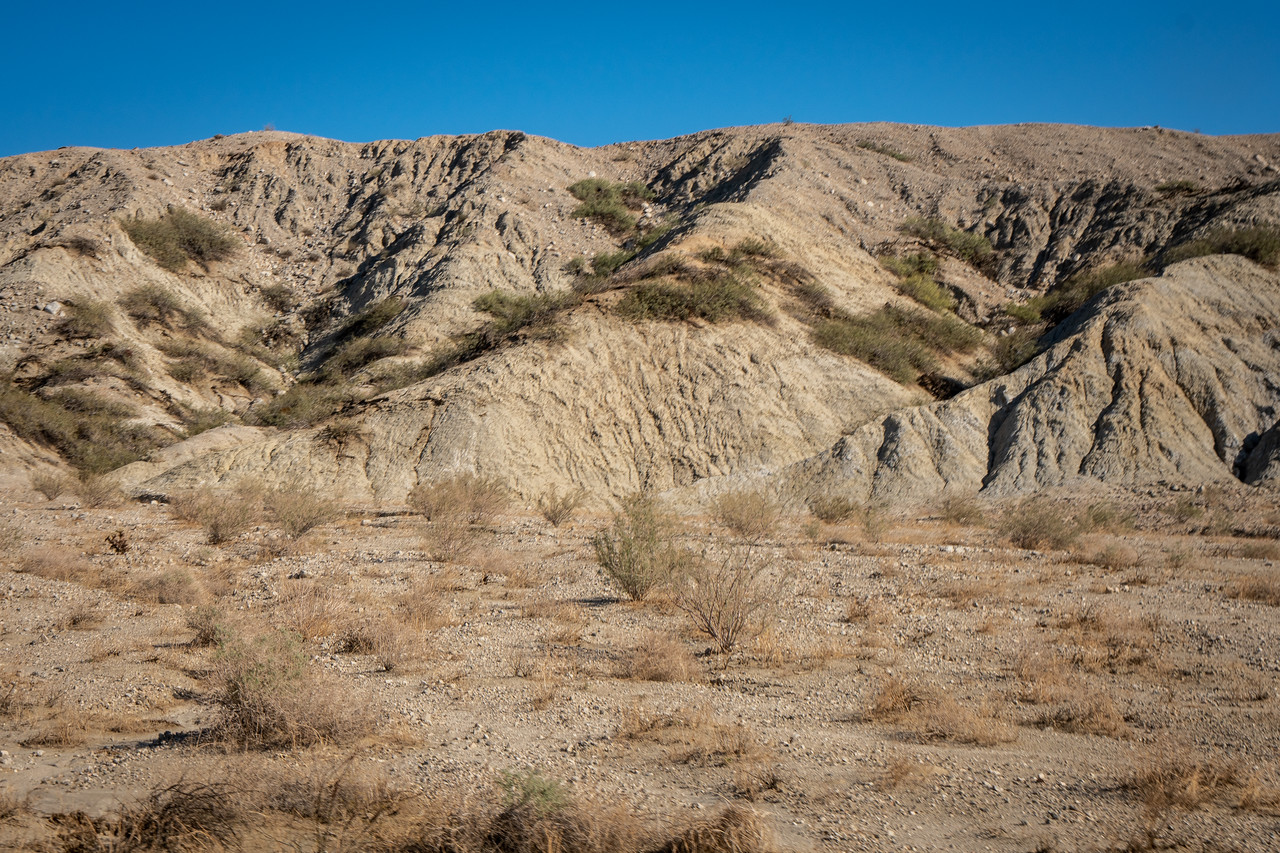 I shot the above picture as the jeep bumped along the dirt road.  The green line of grass and plants marks this unique area where the plates are grinding together.

It’s all about rocks

We traveled up into the canyons and explored the strange uplift and rock formations.  In the following picture, the lighter hills contain shale.  That’s all I know.  I’ve no idea why there’s shale; I’m not a geologist. 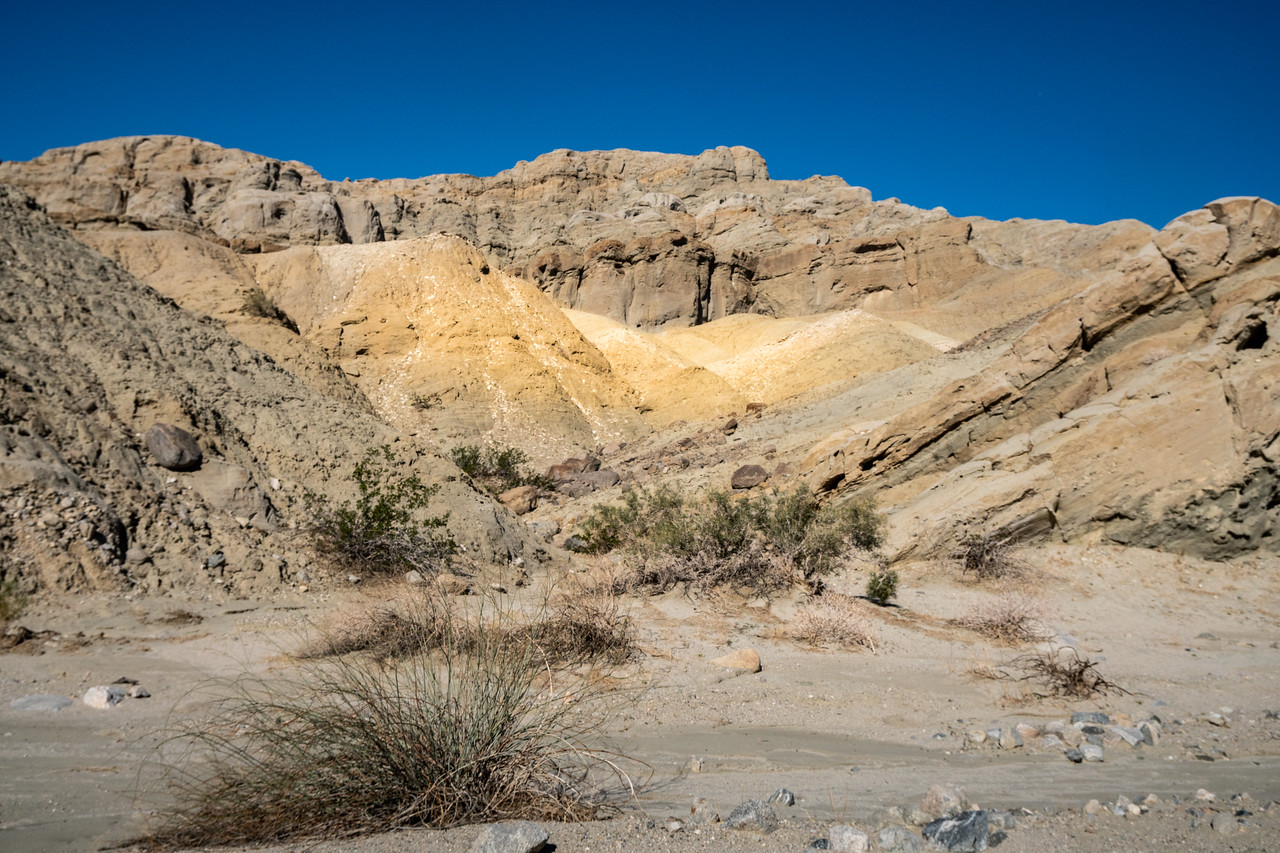 The canyons wound around and at some points became very narrow.  We managed to squeeze through with the jeep.  The tour included a few places to stop and hike.  Our guide pointed out the fault gouge.

The fault gouge is finely ground rock created as the two plates grind past each other.  We had a chance to touch this stuff.  It’s as soft as flour!  I expected it to be fine and dusty, but instead, it almost coated one like talcum powder.  I’ve never felt rock like this.

Most of the canyon is soft, composite rock.  It looks like it could crumble at any minute.  In some cases, it has layers that show the ancient story of the land.

Layers of sediment tell a story

In the above photo, one can see the lines marking the layers.  Often there are rough pebbles separating sections of stone.  These pebbles were probably left by running water.  As one works from the lower left to the upper right, the frequency of the pebble lines eases.  Our guide suggested that this marked a period of drought.  Moving toward the right we can see a gray line which may be ash.  Could there have been a fire during this dry period?

I have no idea if this story is true.  You’ll have to judge for yourself.

A highlight of the tour was the climb up through a slot canyon.  It was a narrow, twisting passage, which took us nowhere.  We had to climb back down again to get to the jeep.

Slot canyon, with little more than room for one foot

We didn’t see any coyotes or foxes or many birds.  Nor did we see snakes.  There was a lizard or two, but that was about it for fauna.

Our tour included a drive to the Palm Oasis.   As expected the area has a forest of fan palms. 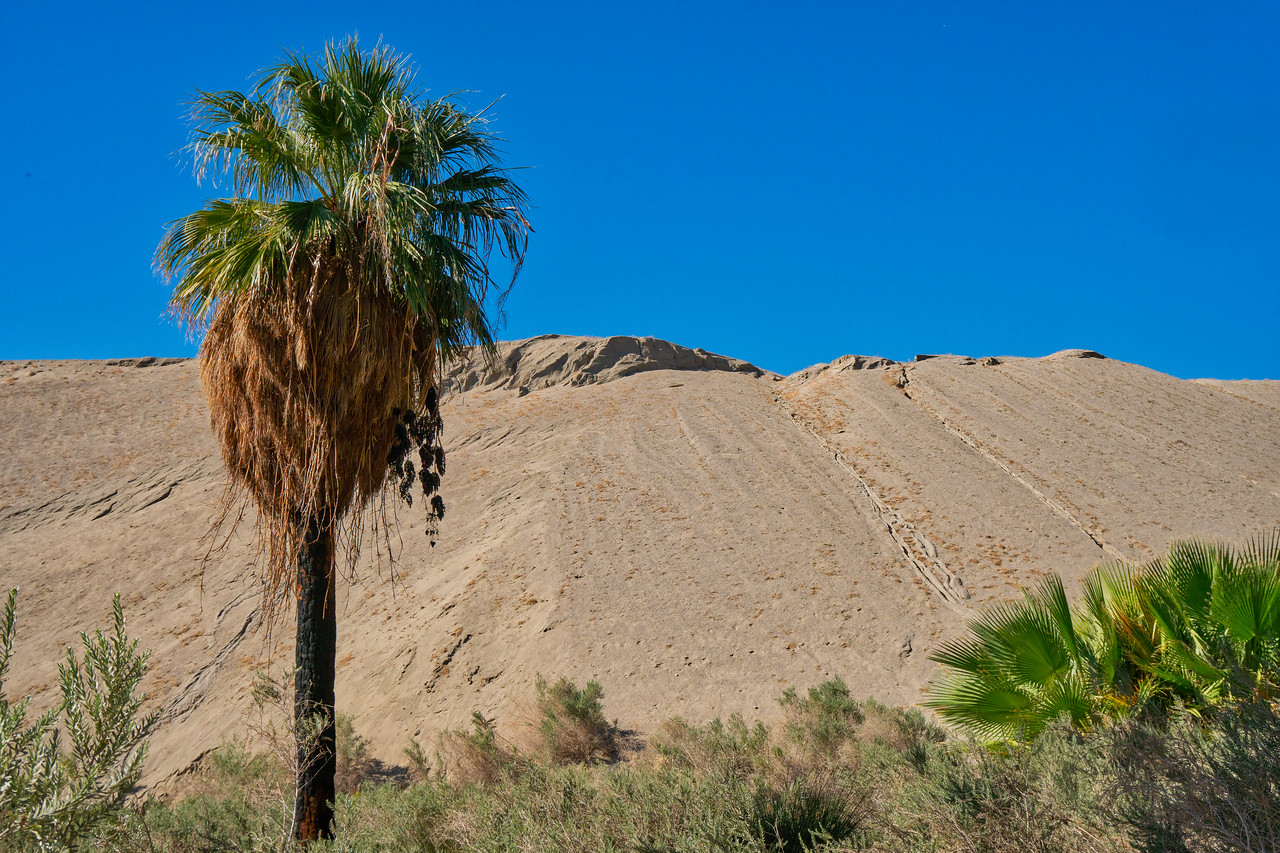 As we left the center of the oasis, I saw this lone palm.  The fruit dangling down on the right side is edible.  Several people tried it!  We found a trickle of groundwater but were warned that the locals call the area The Snake Pit.  One guide said she saw as many as four rattlesnakes lounging in the shade of a palm waiting to pounce on something tasty.

To see more images from my adventure on the San Andreas fault, please click here.