I’m lucky to be within easy (did I say that?) driving distance of Los Angeles and its fabulous museums. As a result, I don’t miss the special, once-in-a-lifetime things like King Tut: Treasures of the Golden Pharoah currently at the California Science Center.

My family and I carefully picked a date when we thought the area would have the least amount of traffic.  The exhibit has been running for several months; so I hoped there wouldn’t be as many people crowding in to see the king.  Alas, Tutankhamon and his treasures are still very popular, even if there isn’t a mummy.

The focus of this exhibit is the artifacts found by Howard Carter nearly a hundred years ago.  It was November 1922 when the archaeologist discovered the tomb of King Tut.  I can’t imagine the excitement in that camp.  One of the first things Carter saw was the Wishing Cup. 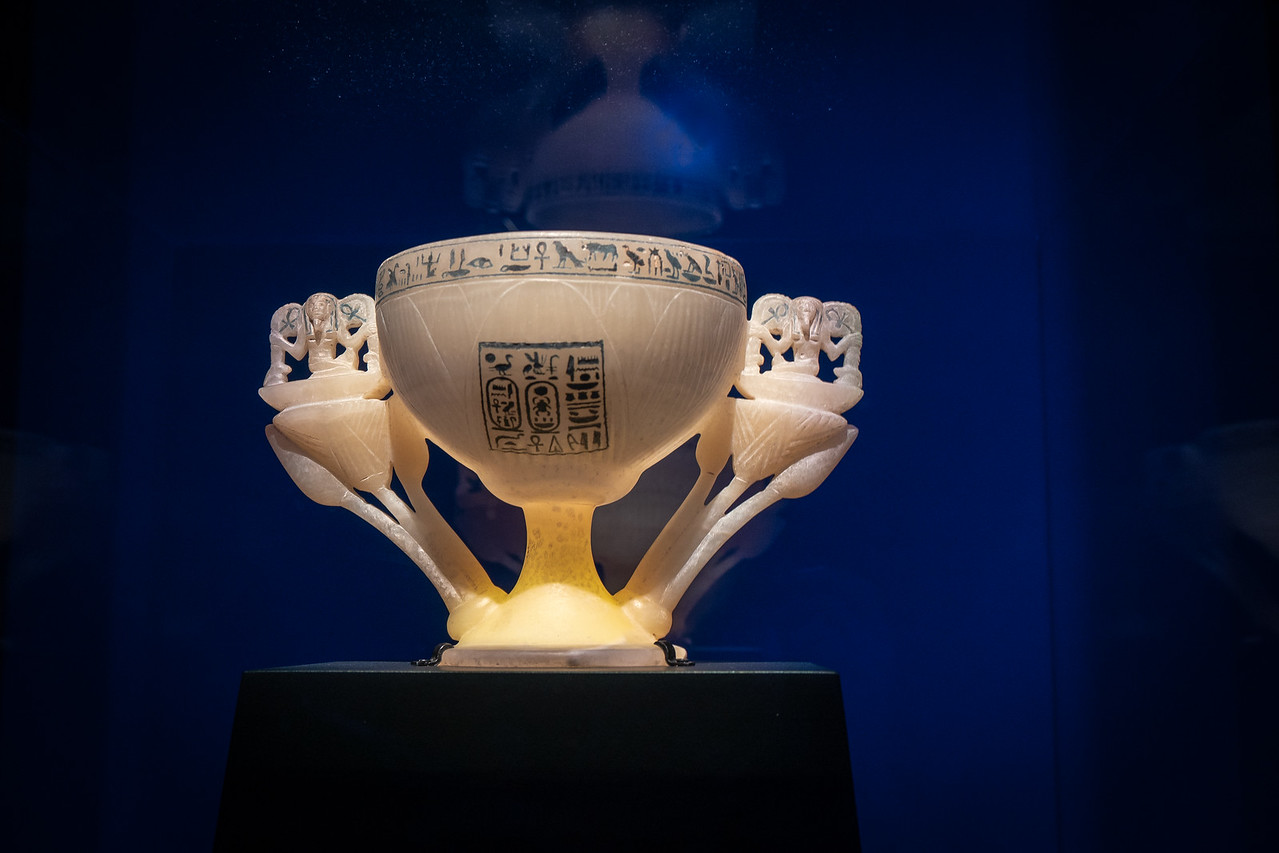 The design on the alabaster cup shows the cartouche of Tutankhamon and next to it another cartouche depicting the dung beetle.  This too refers to the pharaoh.  A cartouche is an oblong oval shape which contains the hieroglyphics spelling out the name of the king.  These cartouche symbols were everywhere, on almost every object in the exhibit.

As I started to say, the exhibition centers on the artifacts found in the tomb.  King Tut’s tomb had more treasure than any found to date; there were over 5,000 pieces!  It took Carter ten years to catalog everything.  These treasures were placed with the king for a reason.  He would need them on his journey in the afterlife.  The exhibit takes us on this journey by referring to the spells from the Book of the Dead. 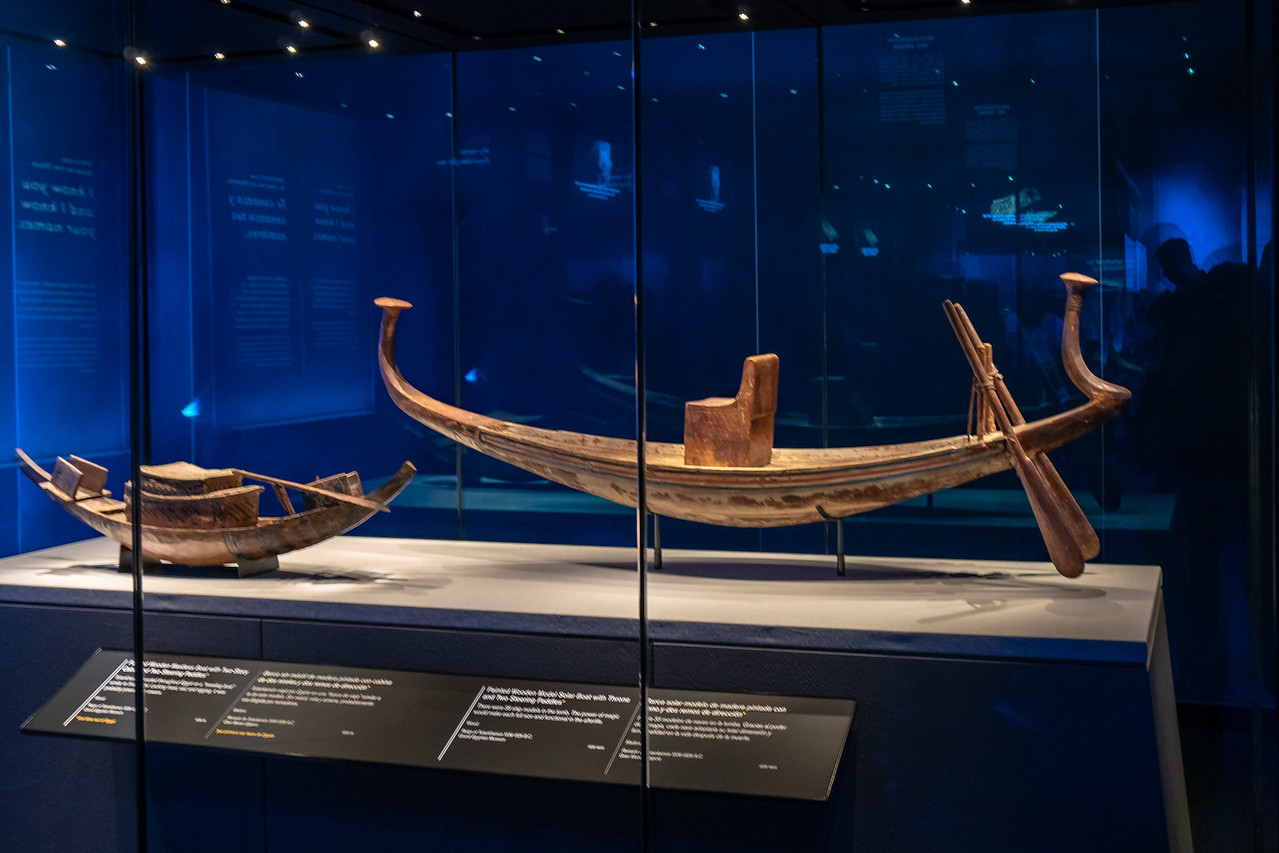 There were 35 model ships in the tomb.  The large one in the photo above has a throne on it.  I think these became full-sized for the king as needed.  The journey wasn’t easy.

There were various boxes and cases to hold all the essentials for the pharaoh.  Many were carved and made of wood inlaid with gold and precious stones.  Some are just suitcases, or they appear as such to me. 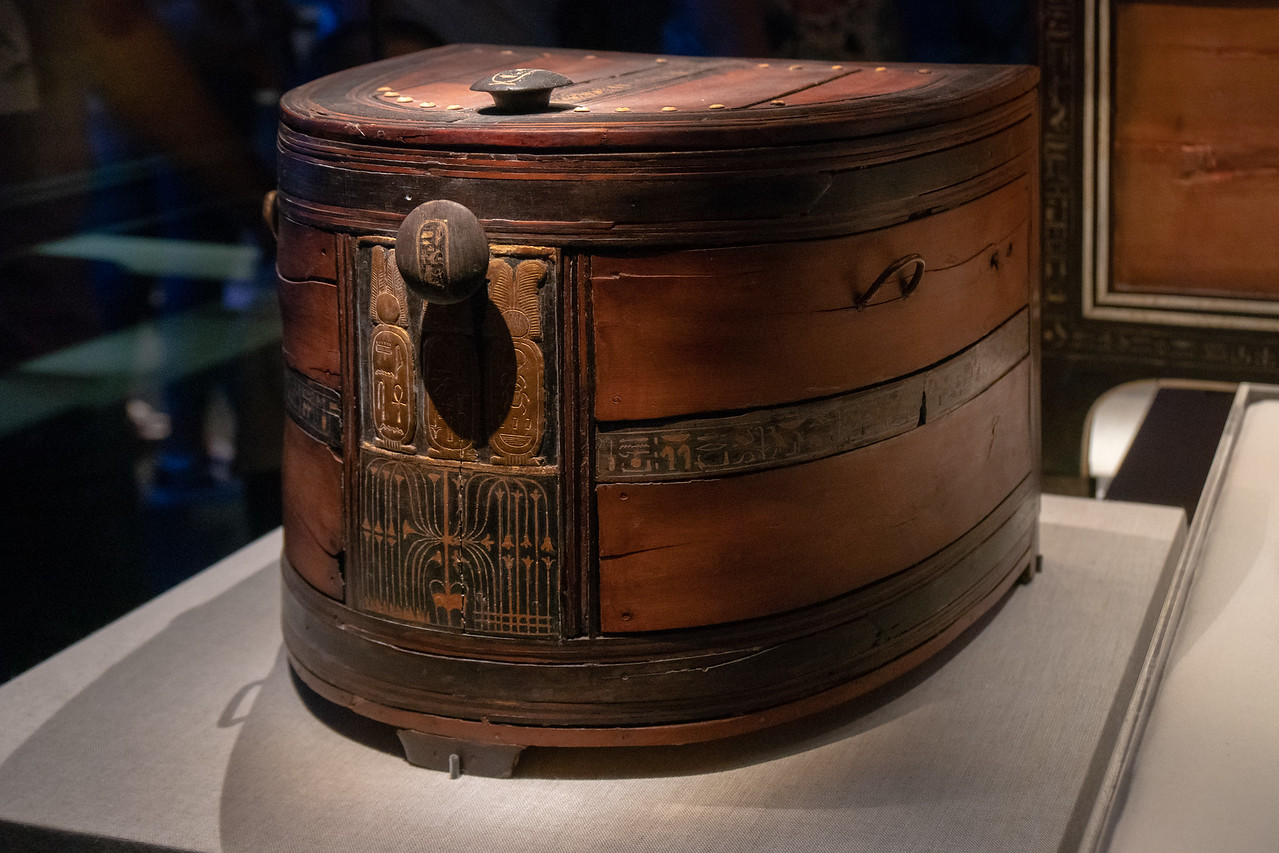 The front of the box bears the cartouche symbols of the king.

Also included in the tomb were several gilded wooden statues.  My favorite is this six-foot statue of Tut as the Guardian of Ka, the life force.

Egyptian religion for the afterlife is a bit over my head, but I’ll try to explain the idea of the Ka.  For ancient Egyptians, the life force, the Ka, inhabited the body.  Since they believed that after death, the Ka could leave the body, it was essential that the body was preserved as well as possible. Therefore they ensured that the Ka had a home.  The Ba was the soul, an entity that could travel between the world of the dead and that of the living.  There were additional entities as well.  All of these played a part in making the magical journey from death to the final weighing of the heart ceremony.  At this point, Osiris would judge the person and see if the heart was lighter than a feather.  If so, eternity awaited.

Finally, King Tut: Treasures of the Golden Pharoah is a large exhibit, but well worth the time to see it all.  Some may go to see the gold and glitter, but I like the idea that 3,000 years ago a civilization thrived in Egypt.  Its history and culture have shaped our society.

To see more images from my visit to the King Tut at the Science Center, please click here.