Along with a visit to Mission Santa Barbara, my plan was to photograph some of the famous buildings in the city.  I went about this in my usual spontaneous fashion, missing many great sites but finding small gems.  I started my quest on the afternoon of my arrival but quickly realized there were too many people on the streets.  Rather than wait for them to leave, I did.   Just before giving up, I did make a photo of the sign above Joe’s Cafe.  I liked its old-fashioned look.

My hotel wasn’t the fancy beach resort, although it was right on Cabrillo Boulevard across from the beach.  I chose it because it looked (you guessed it) like something from the 1940s or 1950s.

One of my many renditions of the Ala Mar Motel

I took several photos of the Ala Mar in every kind of light.  One could call it quaint.  It certainly doesn’t compare with its neighboring higher-end resorts.  Nonetheless, even without air conditioning, I survived a night at the Ala Mar.  It’s a strange little place, but I like it.

The following morning I resumed my quest.  No one was about as I drove along the back streets toward town.  I crossed a bridge and noticed the reflection.  I couldn’t resist another image. 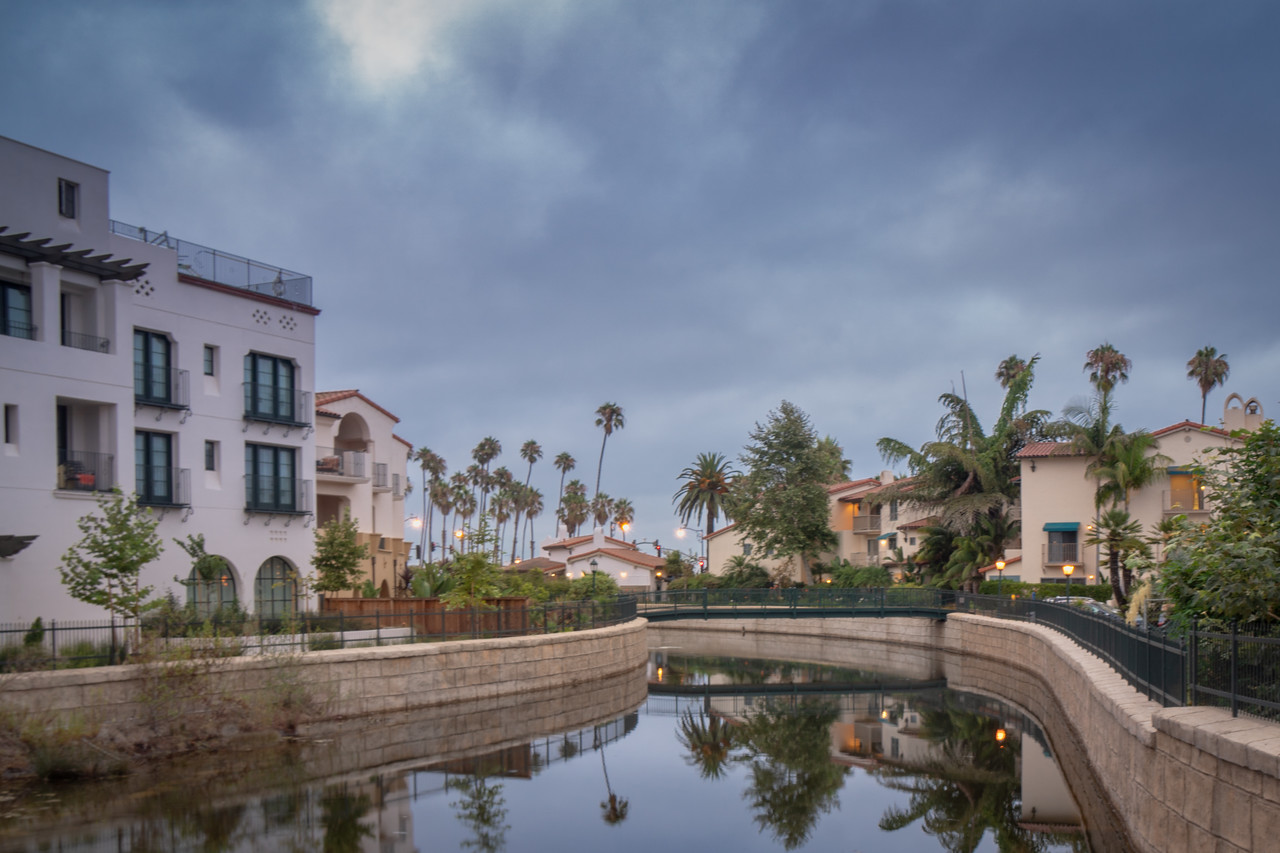 Mission Creek from the Mason Street bridge, looking toward the sea.

This subject had nothing to do with my plan for Santa Barbara, but it caught my eye.  The traffic light in the distance is Cabrillo Boulevard.  The scene above is just around the corner from my hotel.  How long will the Ala Mar continue to exist? I may return to find a condominium occupying that lot.  Probably not;  it’s too small.

I was losing hope on the “old buildings” goal.  That’s okay, goals can change.  I wandered State Street and found several interesting storefronts. 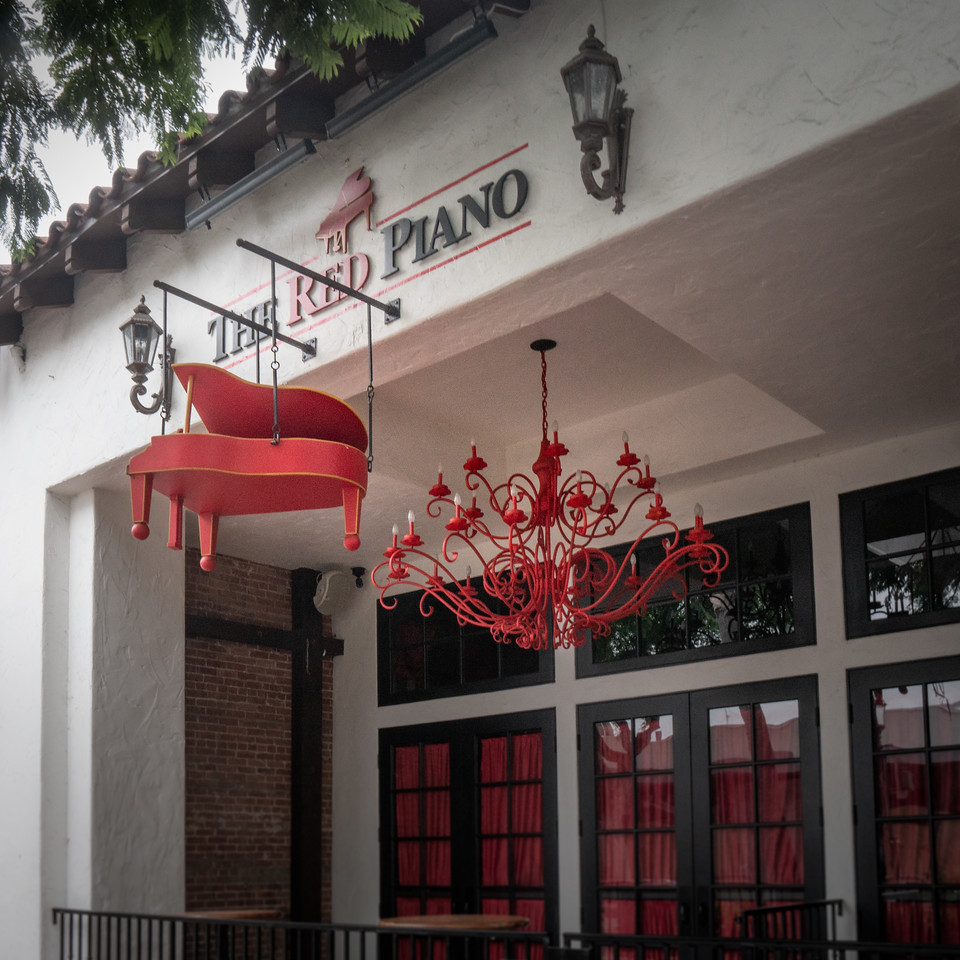 Although the name is The Red Piano, I like the chandelier.

This place, like many, is a bar but this one has live music so it’s a cut above.  At least so I’m told.

I met some workers repairing the brick sidewalks.  I thought the tree had caused some uplift but discovered the problem wasn’t tree roots.

A gopher had invaded!  He’s gone now, and the men were working to fix the pavement.  I left them to their work.  I’m sure they will finish before the businesses open.

I was determined to find the old Courthouse built in 1926 after the Earthquake of 1925. 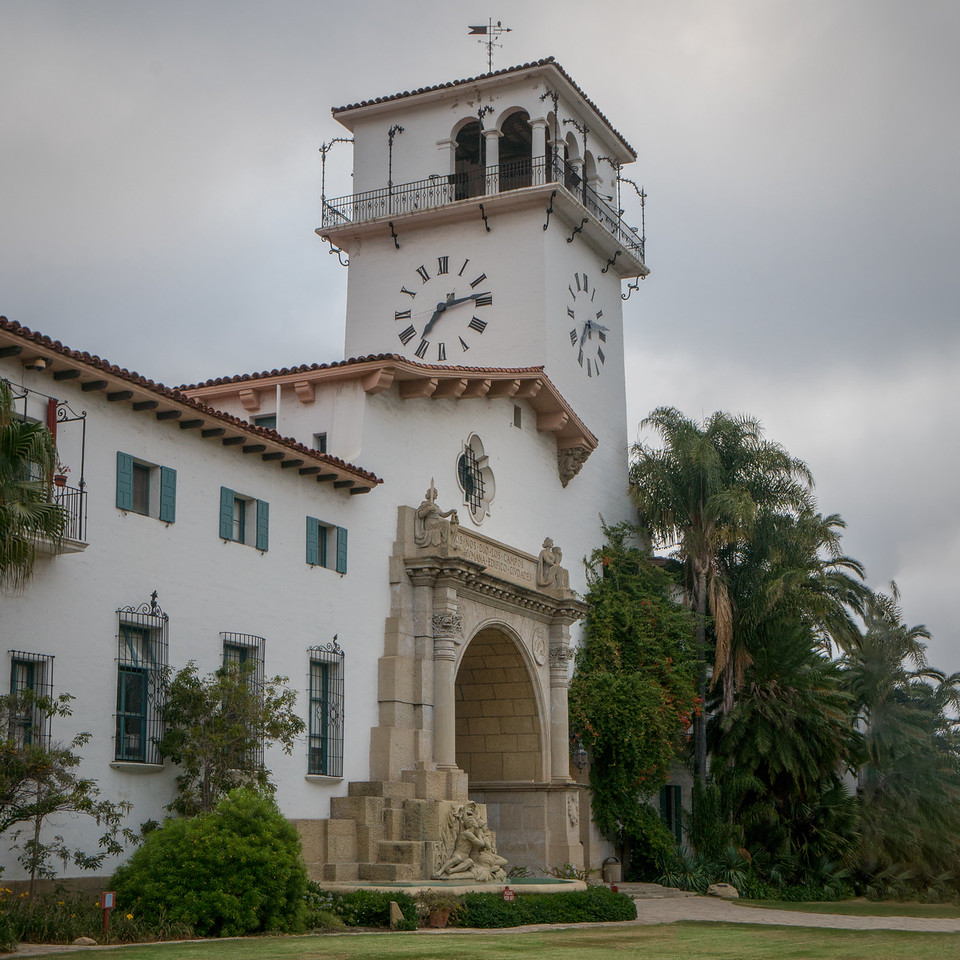 For me, this is more than another old building.  It’s a place where mystery writer Margaret Millar did her court-watching.  One doesn’t find her books easily these days.  She has been overshadowed by her husband Ross MacDonald.  I still have a preference for her style and always look for her in used bookstores.

I’m sure the downtown area had more for me to see, but the sun was rising and I had other plans.  I left the buildings and headed back to the Ala Mar to regroup.

To see where I went next, log on next week!