Once again this year I was lucky enough to snare tickets for the Jet Propulsion Laboratory (JPL) Open House held in Pasadena, California.  Admission is free, but tickets are limited and once they hit the internet, they go quickly.  The JPL Open House is a popular event!

A line forms as people rush to tour the Assembly Building

Having seen some of the popular exhibits last year, my daughter and I headed for something a bit different.  Spacecraft Assembly sounded intriguing.  As with many of the buildings we were guided through this area.  No random wandering allowed!  Nonetheless, it was a thrill, especially so after the recent launch of the Mars Rover Insight.  In Building 11 we got a peek at the next rover generation as we looked down on the Clean Room.

The Mars 2020 rover fits beneath the descent module.  This shiny contraption in the center of the above image helps the rover descend toward the surface of the planet.  Once close enough, the rover goes on alone and this module ejects off to goodness knows where.  I wasn’t too clear on that part.  I don’t know which is more exciting, the module or the emblems of prior spacecraft.

Once outdoors again, we saw a crowd forming around the robot display.  This was a wonderful attraction for kids.  Everyone loved the robots.  The title image above is of a little robot called Hopper.  You got it; he hops.  As one little boy put it, “like a bunny!”  This area was called the Robot Touch Tank and it was certainly hands-on.  We checked out Robosimian. 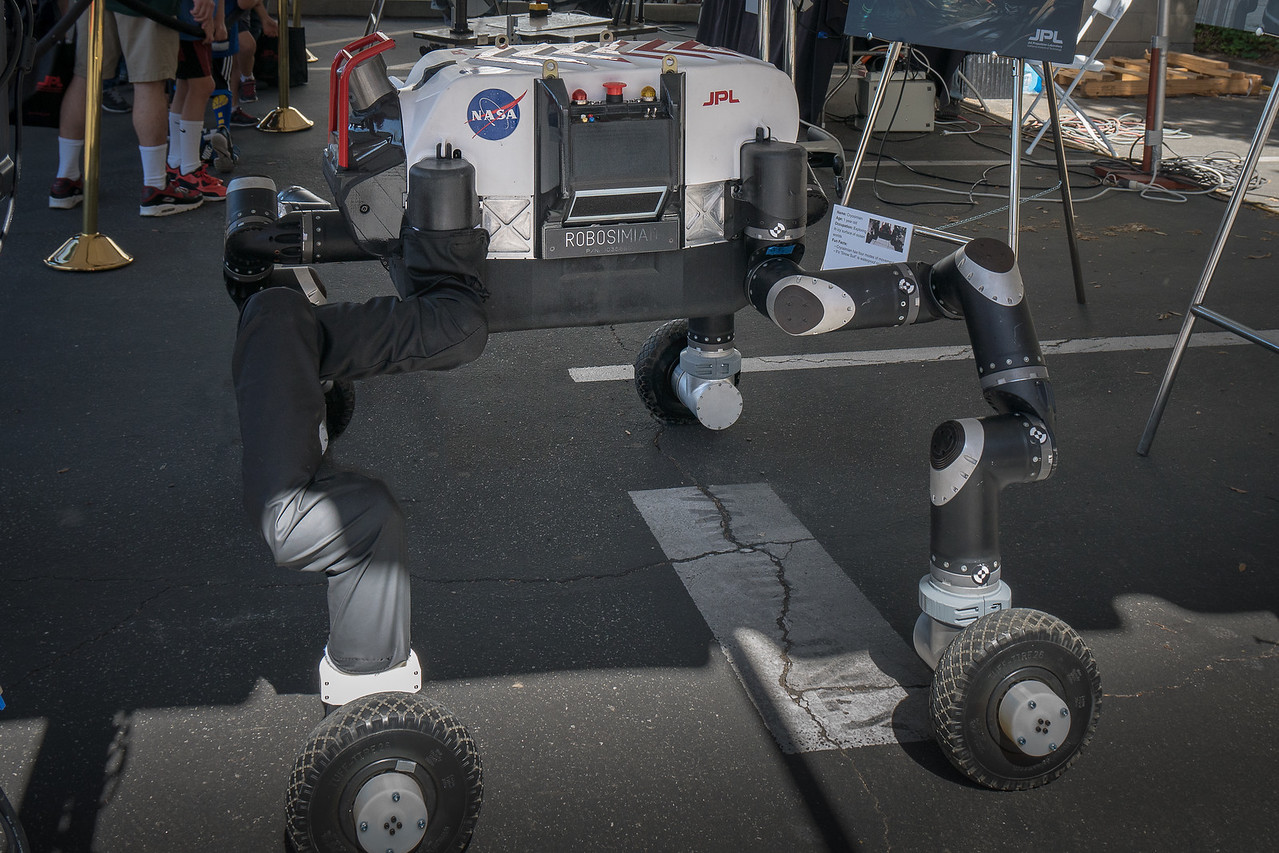 Robosimian at the JPL Open House

It’s a versatile robot suited to varying terrain and environments; there is even an underwater Robosimian called Aquasimian.   We had a chance to heft one of the tinker-toy like parts that form its legs.

The JPL employee was holding it as if it were nothing.  It wasn’t; that small piece was heavy!

JPL is synonymous with science and space exploration, but not everyone has to have a Ph.D. in Physics.  We stopped by the Fabrication Building to see how parts are made.  There we met the machinists with all their fabulous toys.  There were huge 3-D printers but also arc welders.  We had a chance to see that up close.   We chatted with several employees and learned how the machines work.

The above is a photo of the floor from above.  On the left edge is one of the big machines with a selection of drill bits or milling cutters.  A computer program controls the milling pattern and selects the right cutter.  Or something like that.  I’ll never be a roboticist nor will I make the grade as a machinist.   One thing I like is the octopus just below the wheel with cutters.  We saw several of these things scattered around the room.

More importantly, everyone we talked with wanted to explain the equipment and how he plays a part in getting ready for flight.  The people at JPL make the difference and certainly, the enthusiasm of the machinists made this building worth the visit.

When I think of JPL I think of spacecraft and missions.  We stopped by the exoplanet exhibit, another busy building.  Here we discovered all the experimental work being done to learn more about the planets orbiting distant stars.  I particularly liked the starshade. 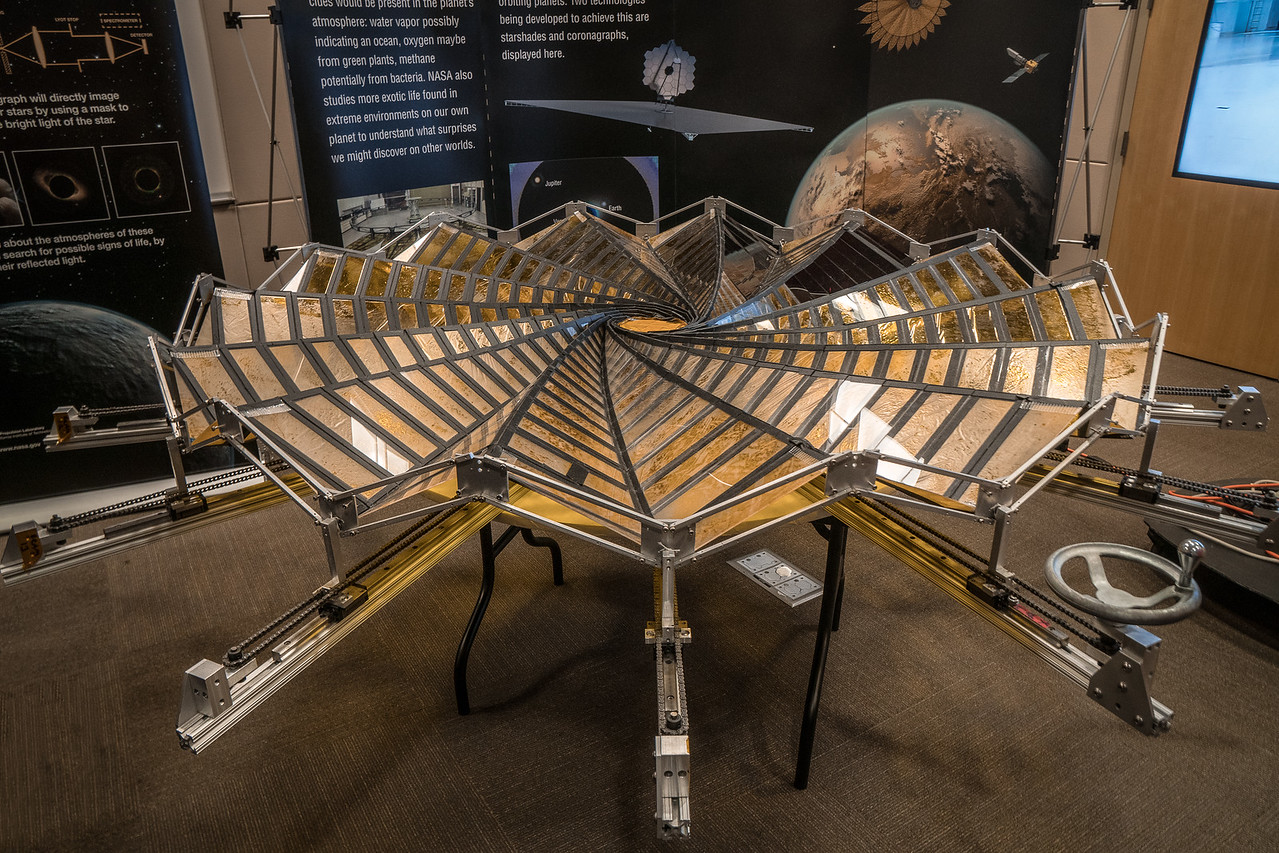 Model of an unfolding Starshade at the JPL Open House.

The above image shows a small version of a starshade as it unfolds.   The idea is that the spacecraft will travel to another star system and then open the shade when it nears the planet being studied.  The shade will block the light from the nearby star and allow earthbound scientists to see the planet.  The JPL employee said he came up with the design based on origami.

Yes, there was a building devoted to the study of Earth and Climate.

Several satellite models were on display.  I find it amazing how much information these things gather.  They can track ice or measure the height of the surface and determine if it’s rising or falling.  Is this helpful in predicting earthquakes?  I don’t know. The important thing is they are gathering information that will help all of us make informed decisions about our environment.

My daughter and I spent all day on the JPL campus.  There were lines, but we didn’t encounter any that were horribly long.  The Open House is a two-day event, and the weather always seems to be hot and sunny.  The staff members do their best to keep these lines out of the sun.  There are awnings and tents where the queues form.  I’m sure that by the afternoon, the lines have grown too long to fit under the shade.  Take water, sunscreen, and a hat!  Food trucks offer a variety of lunch options.  The campus is hilly, but it’s still accessible.  Ask for help.  The people at JPL are friendly and enthusiastic.  It’s a joy to spend a day sharing their passion.

To see more photos from my 2018 visit to JPL, please click here.