Anyone driving east on Interstate 10 toward Palm Springs can’t help but notice the energy farms dotted with the dozens of windmills, or wind turbines.  I’ know I am fascinated by these things every time I pass by.  Of course, I have lots of questions.  How big are they?  Who owns them?  Why are they facing different directions?  Therefore, a couple weeks ago I set out to get some answers…I took a windmill tour.

There are several such tour operators in the area: I chose one near the freeway and very near the windmills.  I arrived early for a 10:00 am excursion, which gave me time to try some long exposure shots.  I’ll admit I don’t often do this sort of thing.  Nonetheless I set up my tripod in the parking lot and gave it a whirl.  (That is a pun!)

It wasn’t long before the tour started.  We began with a short lecture and then a stroll along memory lane.  On display behind the office were older windmill models that just didn’t make the grade.  They were early attempts that for one reason or another failed when put in the field. Sometimes the problem was the braking system, or lack thereof.  It is important that the blades do not spin too fast.  The shape of the blade was important as well  Also a big consideration was whether the windmill would turn into the wind.  Models that had to be moved by hand were not efficient.

The above Micon was the first successful windmill.  It used a double braking system.  It was also a high maintenance system because those brake pads wore out quickly!

Now, after almost forty years of progress, the windmills have found their place in the Coachella Valley. (This is a perfect place for the farms because the San Gorgonio Pass is one of the windiest places in California.)  The model shown in the following photo is a huge GE turbine.  At its base is a converter.  I believe the guide said the blades create 690 kw of power which then flows into a big green converter box and is boosted to 34,000 kw.  That sounds like a lot of power to me.

The energy moves from the converter to a station where once again it undergoes a change before being transferred to power lines.

Conversion point where the energy is transferred to power lines.

Now it travels above ground to the Devers Substation, just north of the farms.   As you can see by the photo below, the energy then flows out to the entire Palm Springs area. 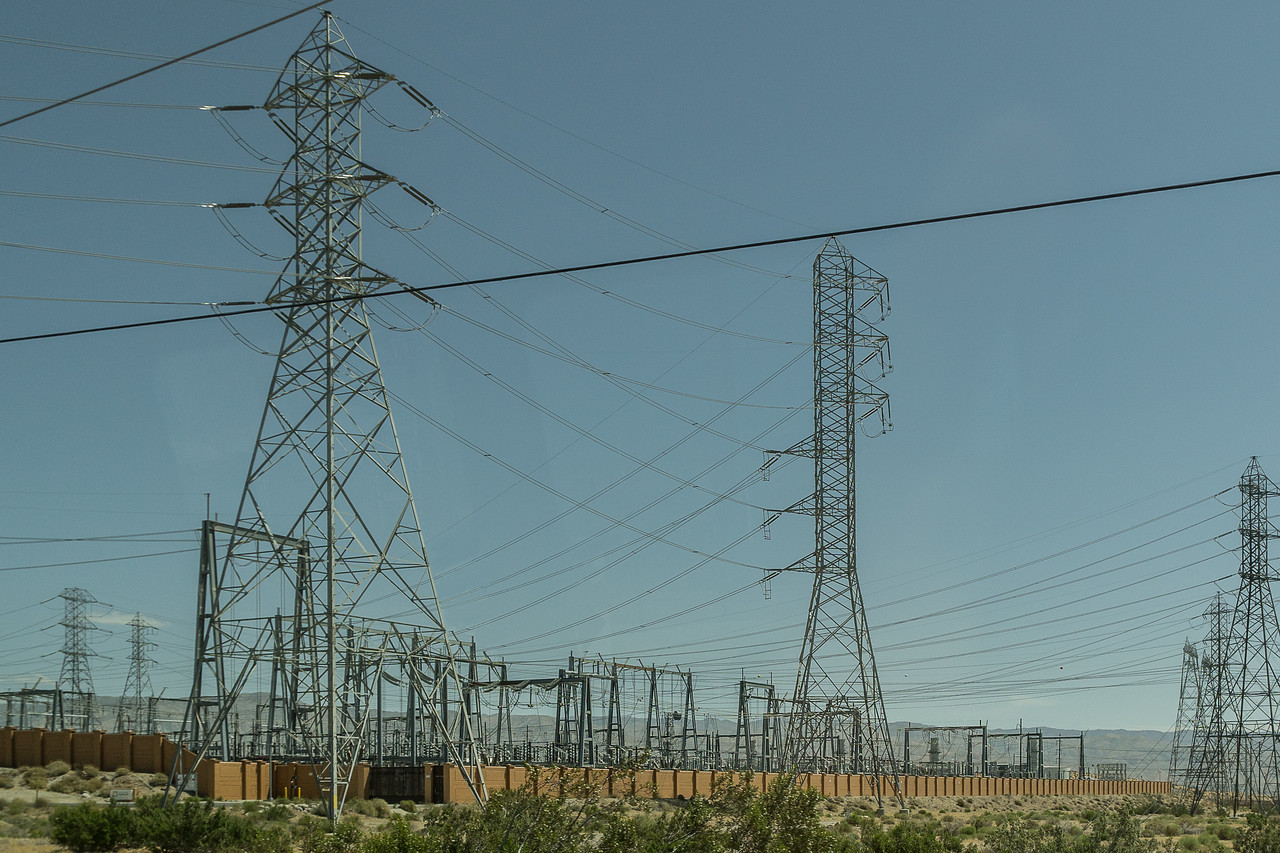 That’s as technical as I can get.  There are about 4,000 windmills in this area, all sending energy to this substation.

Time for a break

We continued to bump along in our small shuttle bus.  I hadn’t expected such a rough road.  It made shooting through the windows of the bus nearly impossible.  Next time I’ll bring a polarizing filter to help with the reflections.  We did have a nice break at the Windmill Market. I liked the row of bottles on display.  The colors made a nice change from the sand and sky of the desert. 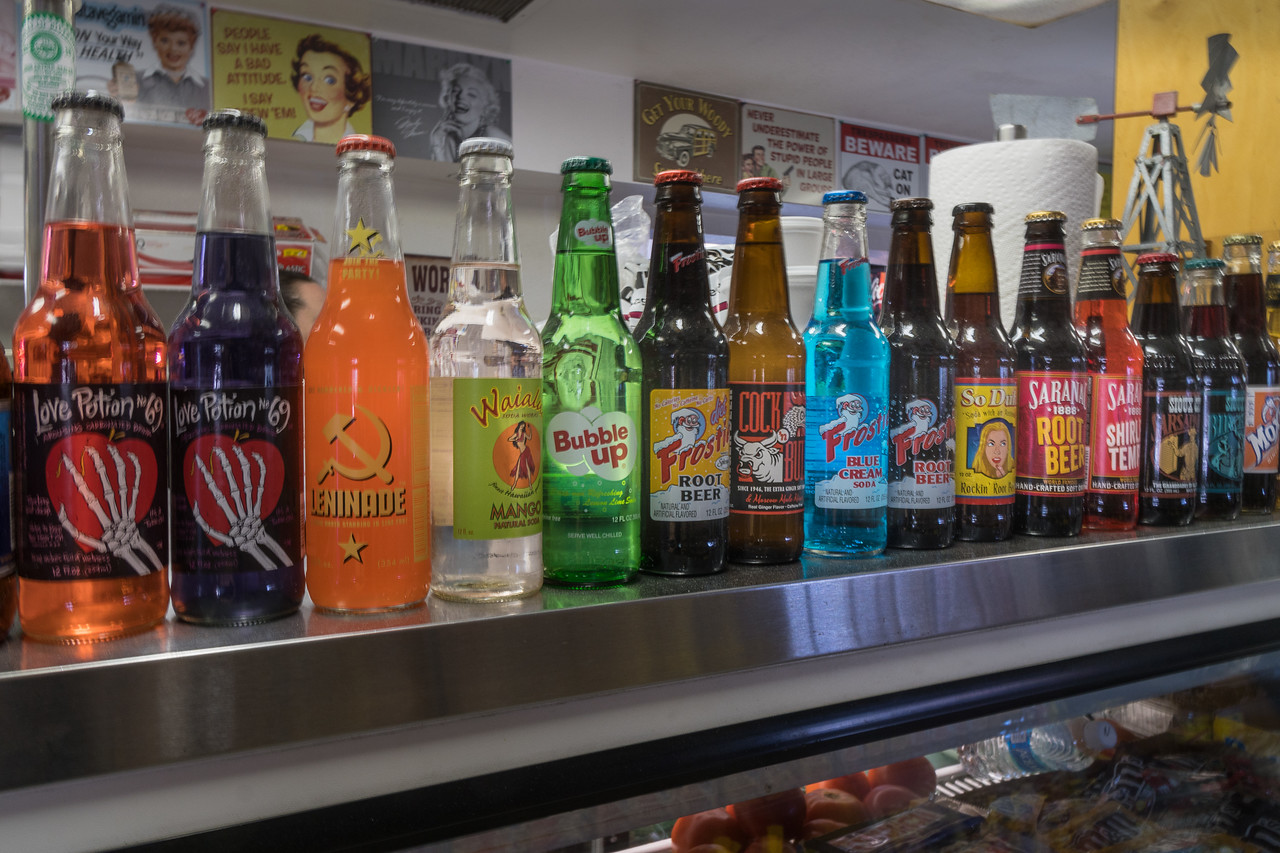 Bottles on display at the Windmill Market

It was a chance to get off the bus and enjoy a date shake.  Dates are also a big commodity in the Coachella Valley.

Our tour was almost over but there was one more windmill to see, the biggest one.  Did the guide say this was a Vesta-90?  It’s about 260 feet high and the nacelle (where the controls are located) is the size of our tour bus.  As we stood beside it we could hear the gentle whoosh of the blades going by.  Other than that all was silent.  It was a peaceful whoosh. 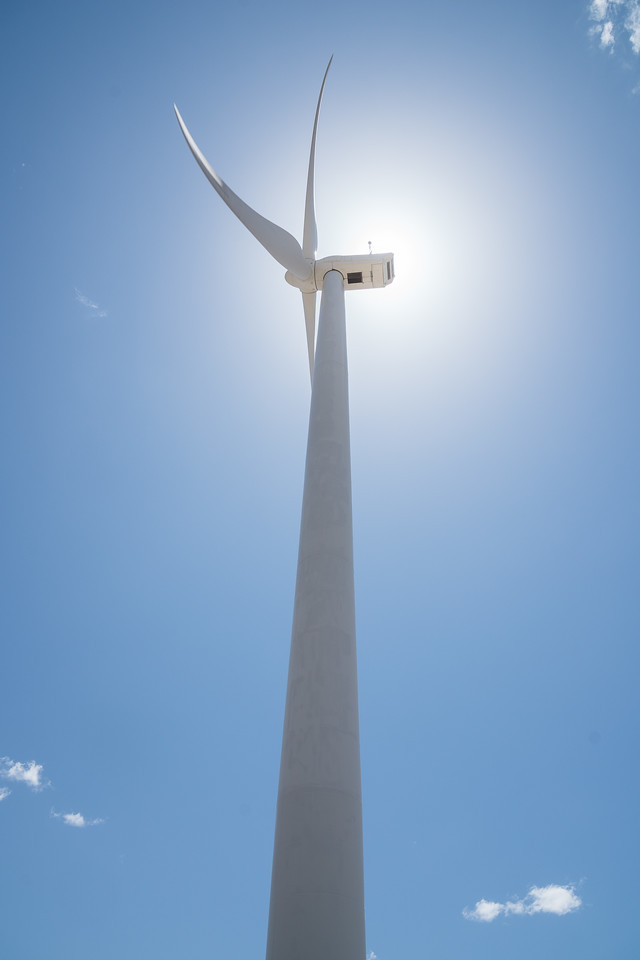 Largest windmill in the pass at high noon

Don’t quote me on some of my facts.  I was often crawling on the ground trying to get the entire windmill in my shot.  I just wasn’t listening closely.  If you’re curious about these giant machines, head on out and see them for yourself.  It’s thrilling!

To see images from my windmill adventure please visit my gallery page by clicking here.