Nestled just to the south of Tongariro National Park is the wonderful little town of Ohakune.  This was another must see place on my itinerary.  Why?  Well because of the Big Carrot, of course!  My daughter and I had already visited Tirau and seen the Big Sheep and the Big Dog and were definitely ready for the next Big Thing.  Why a carrot?  Rumor has it that Ohakune is the carrot capitol of New Zealand. That rich volcanic soil is great for agriculture. 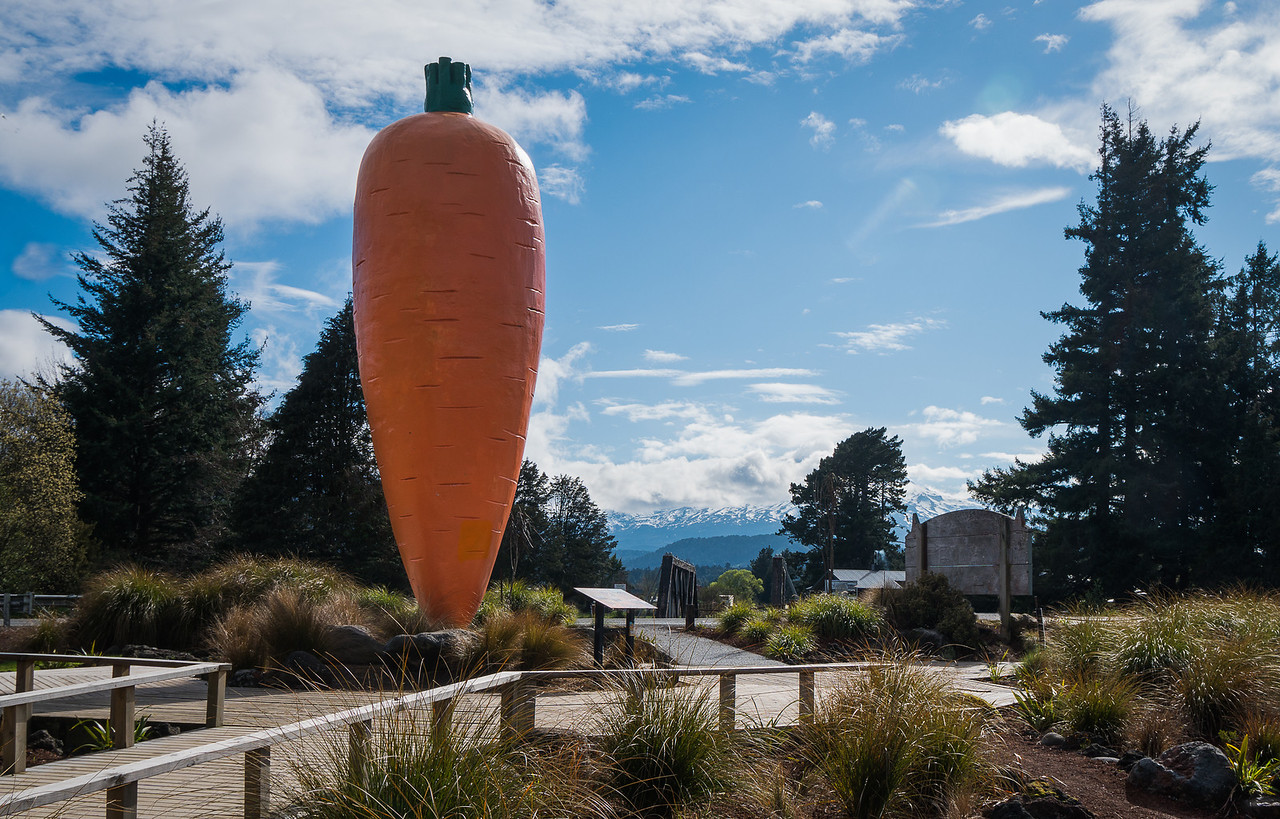 The Big Carrot in Ohakune

In the distance you can see the snow on the slopes of Mt. Ruapehu.  That’s the southernmost of the three big volcanoes in the National Park.  The other two are Mt. Tongariro, which last erupted in November 2012, and Mt. Ngauruhoe which is best know as the cone-shaped peak used as Mt. Doom in the Lord of the Rings movies.

I was definitely intrigued by the idea of hiking on one of the volcanoes.  The most famous hike is the Tongariro Alpine Crossing, which although appealing was probably far too much for us.  It’s about 20 km one way and would take us over 8 hours.  Does that sound like we’re weaklings?  Well, sometimes it’s best to face facts.  And we do tend to dawdle when we hike.  No, that sort of trek would require more training, and certainly a lot more planning.

We did do a little hiking however on Mt. Ruapehu.  There are some quick and easy walks that just fit our schedule and we seized on the opportunity to explore that area.  We arrived in Ohakune in the middle of the afternoon.  After leaving some things at our bed and breakfast we headed for the first hike, the Waitonga Falls Track.   This was an easy walk through lovely forest.  The weather was cool, and threatening rain.  The absolute best part was when we came out onto a wetlands area. 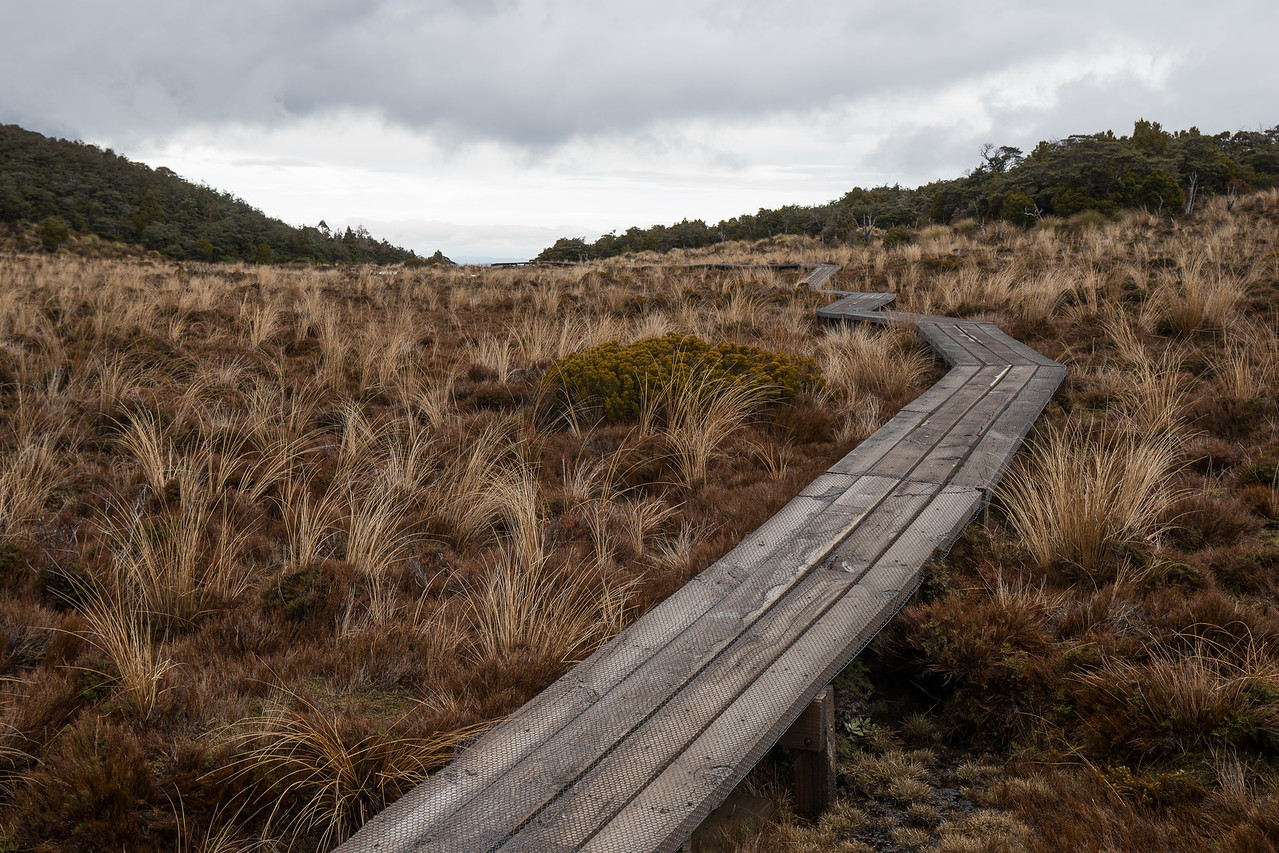 Boardwalk across wetlands on Waitonga Falls Track on Mt. Ruapehu

It felt like being on top of the world!  The grass land was boggy and there were pools everywhere.  No trees grew in this marshy expanse. I was told that on a sunny day one can see reflections of the mountain in the pools.  We only saw clouds and sprinkles from the misty rain.  That’s okay.  This was a marvelous, magical place.

We walked on and started to head down toward the forest again.  Yes, we had just climbed up to the meadow.  I wasn’t all that eager to head down again. 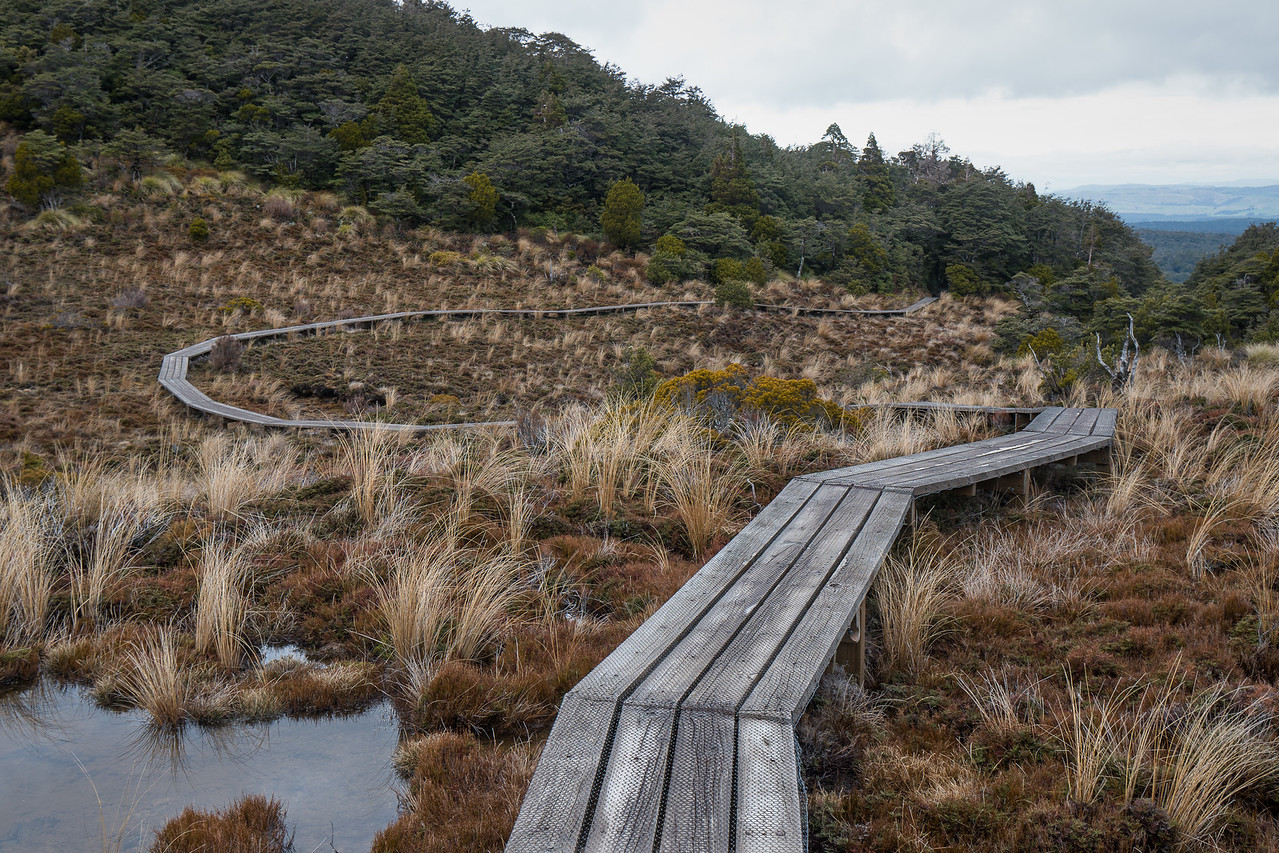 Boardwalk trail heads down into the forest toward Waitonga Falls

But we hadn’t reached our destination so on we went gradually making our way to the river below.  The Falls aren’t easy to see.  To really get a good view one has to climb over rocks and work carefully along the river.  We did a bit of that but not much.  Who would come and get us if we fell in and froze to death?  Okay, I exaggerate.  But it would have been a cold, wet walk back to the car.

It was still misty and there was another walk we wanted to do.  Time to turn around and head back to the trailhead.  Isn’t it odd that after you get to your destination the climb back to the car seems just a wee bit harder?  At least I thought it did.  The trail up to the meadow was a climb involving many steps.  I admit I had to stop a couple times.  Whew, I think my hands were shaking a bit when I took this shot!

Steps on the trail from the Falls to the boardwalk meadow.

It took us about two hours to complete the hike.  I did mention we stop a lot, mostly for photos.  We did do the second track, the Rimu Walk.  It’s a very short loop just at the base of Mt. Ruapehu.  We stopped so often to read the nature signs on the trees and plants that the sun went down before we were halfway around the loop!  That took care of any more photos or sign reading.

We left Ohakune the next morning.  We still had one more stop to make before leaving town.  The receptionist at our hotel in Rotorua said we had to go to “The Dairy” which is really The Chocolate Eclair Shop.  This place is known for its homemade chocolate eclairs.  Of course we purchased one and put it in the glove compartment of the car for a snack later in the day. 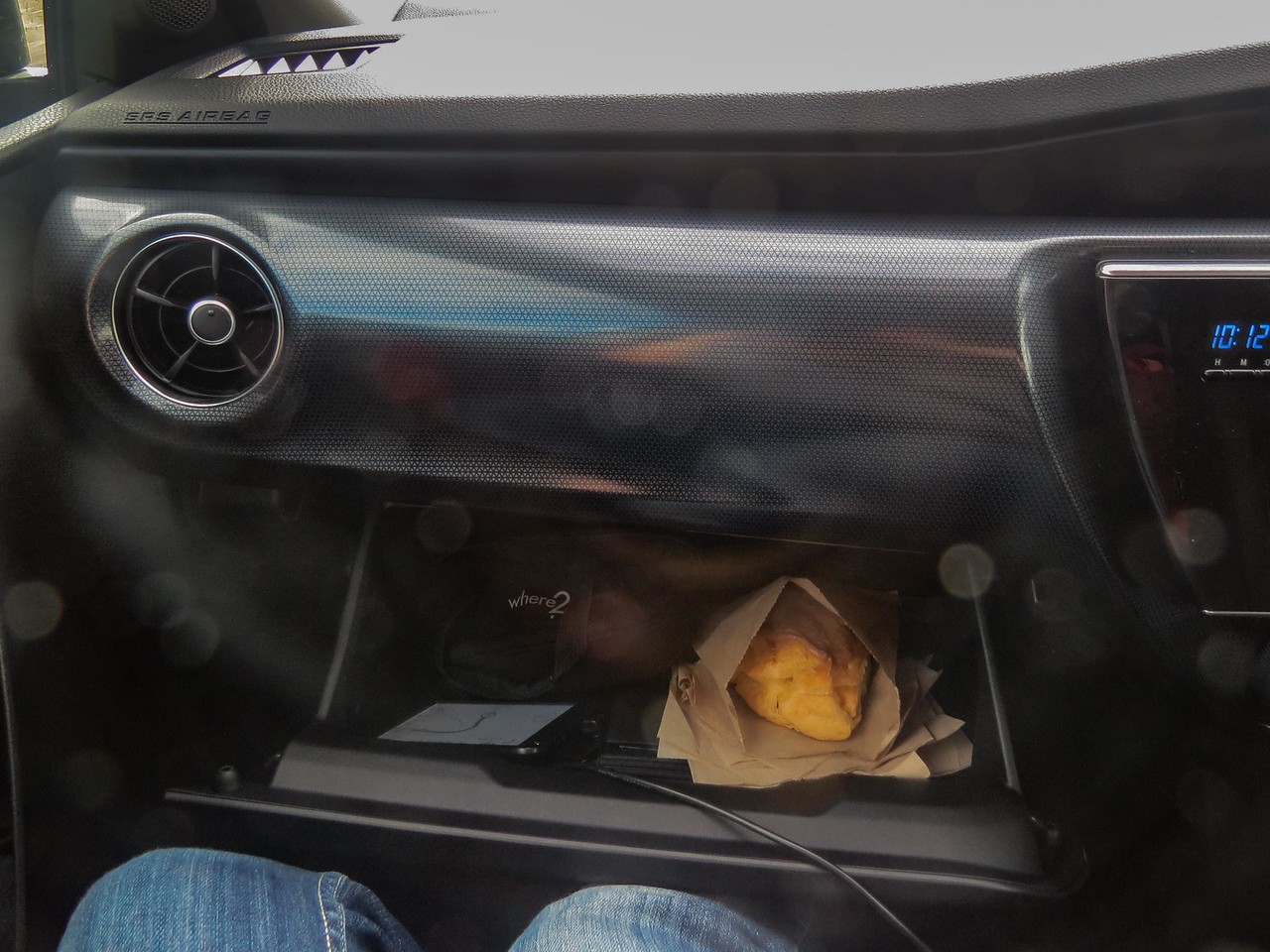 Chocolate Eclair in the Glovebox. Photo by Halley Sanchez

As you can see, the shop makes eclairs on the large size.  It took up so much room in the glovebox there was barely enough space for the GPS!  But boy, was it tasty.