About one hundred miles north of Phoenix, Arizona, is a small town called Clarksdale, known mainly as the station for the Verde Canyon Railroad.  My recent bus tour included a ticket for this excursion, so naturally, I took advantage of the opportunity.  I love trains!

The Verde Canyon Railroad is impressive.  I was expecting a small train with a few Pullman cars.  What I experienced was a very long train with several Pullmans and each with access to an open-air car.  This one is perfect for anyone wanting to take photographs.  I chose it. 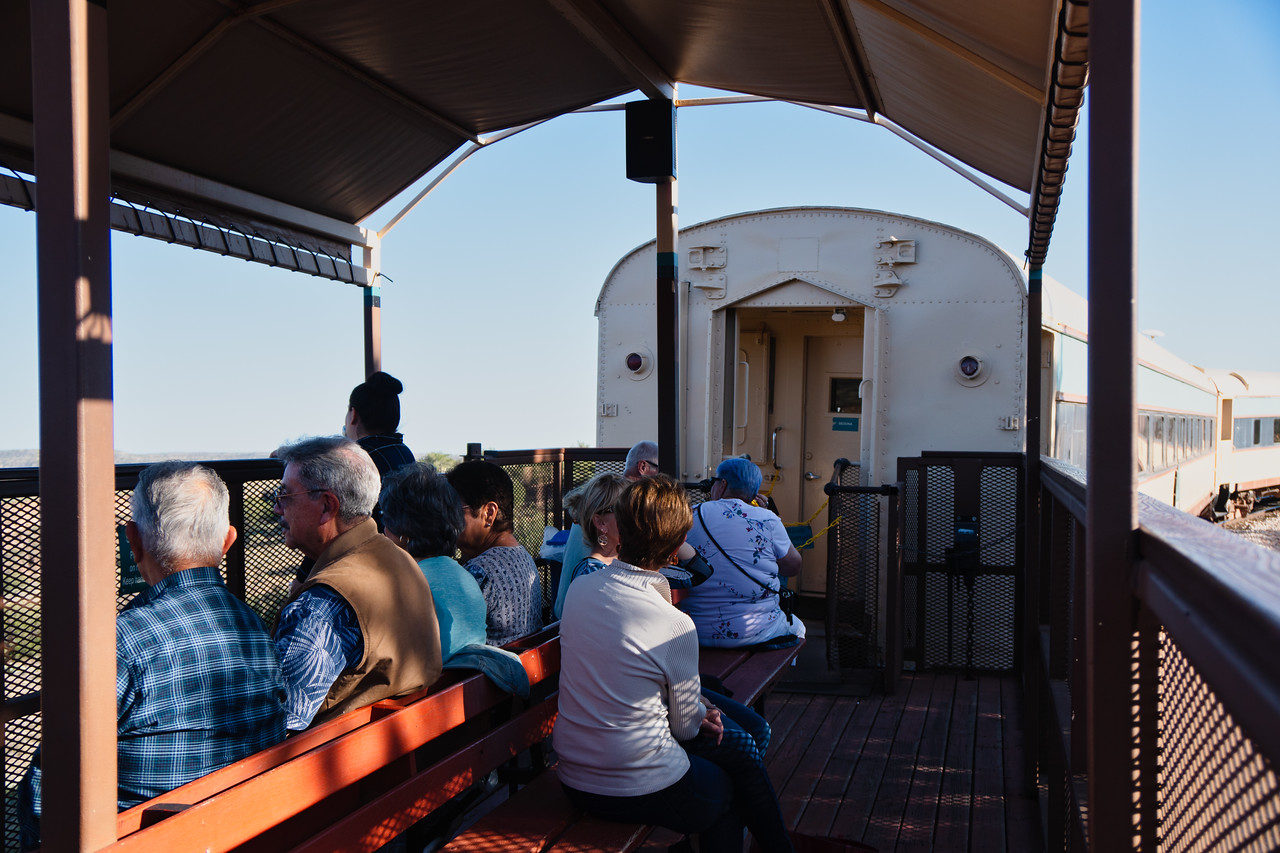 The open-air car on the Verde Canyon Railroad

These cars have docents who explain the landscape and the history of the canyon.  They also point out any special features and wildlife.   It may seem like a sunny way to travel, but there’s an awning.

Two FP7 locomotives dating to the 1950s power the train.  (Yes, I asked; I told you liked trains.) 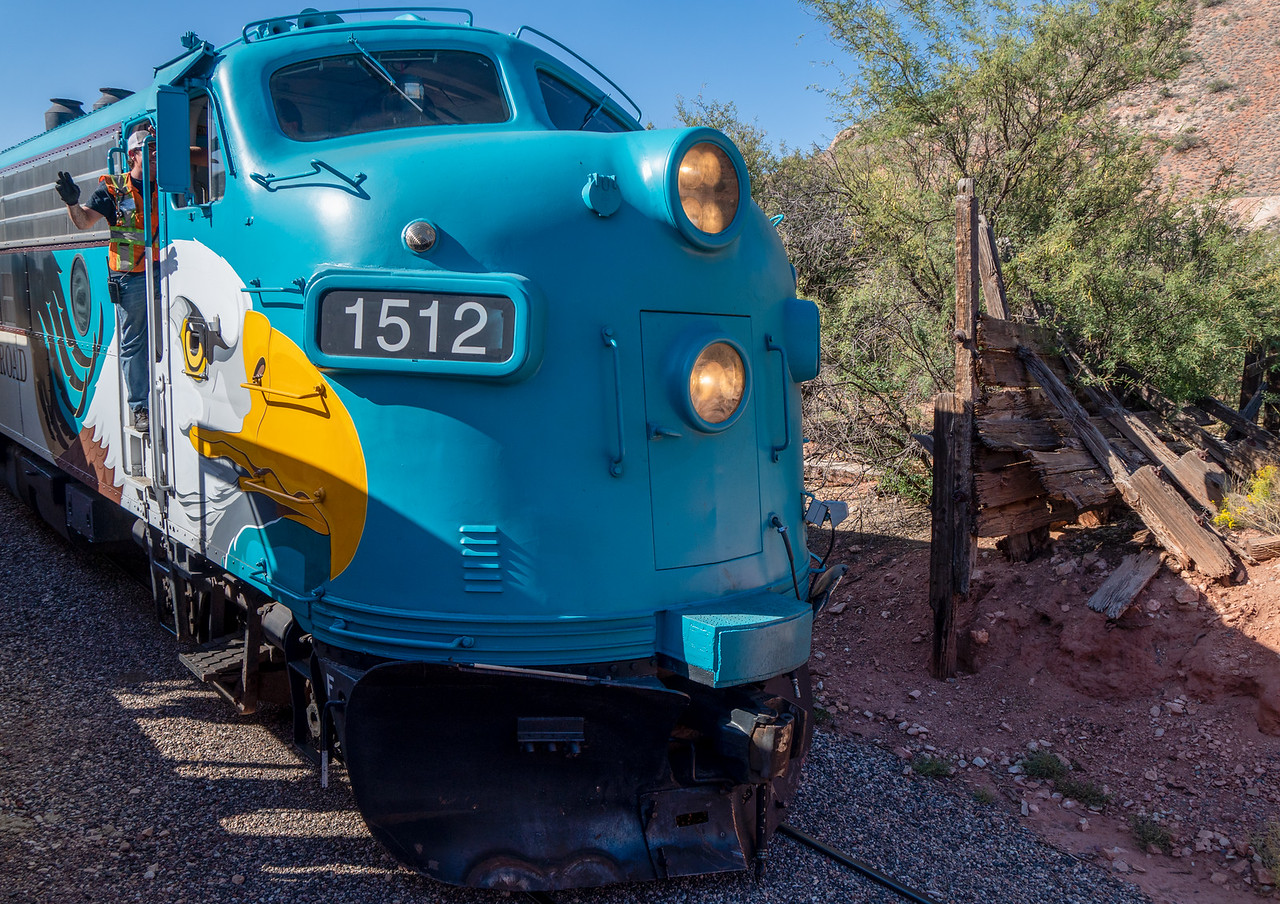 The Santa Fe railroad used engines of this type, so it isn’t too far a stretch to imagine them with the Super Chief look.  Today, they are turquoise and have an eagle emblem, perfect for this wild part of Arizona.

The ride begins slowly, with shallow hills, a few sparse trees, and a fantastic blue sky. 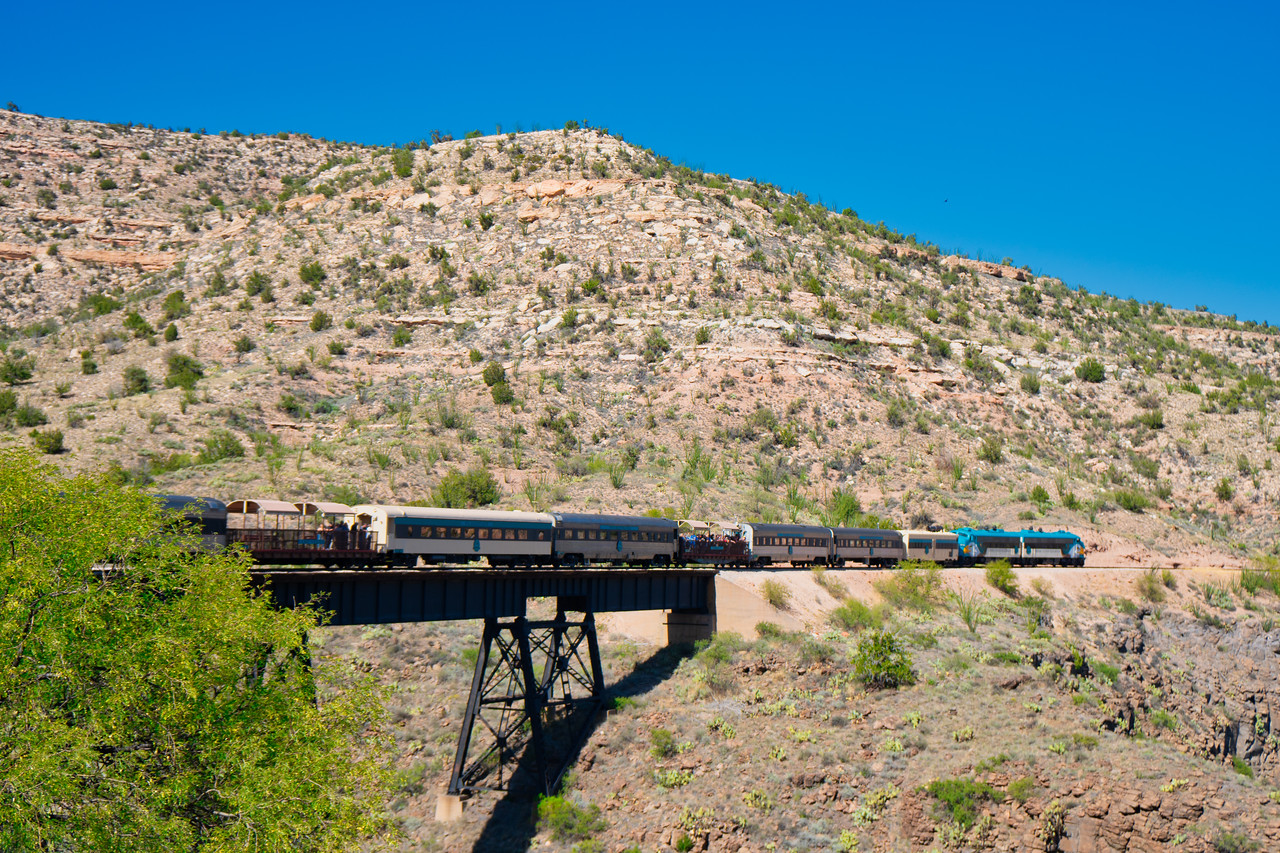 One of the first bridges on our way into Verde Canyon

We crossed many bridges like the one above.  Don’t worry, you won’t lack for opportunity to get a photo of the train on a bridge.

I probably best enjoyed our time along the river.  The Verde River starts up in the Arizona mountains and flows southeast toward Phoenix. 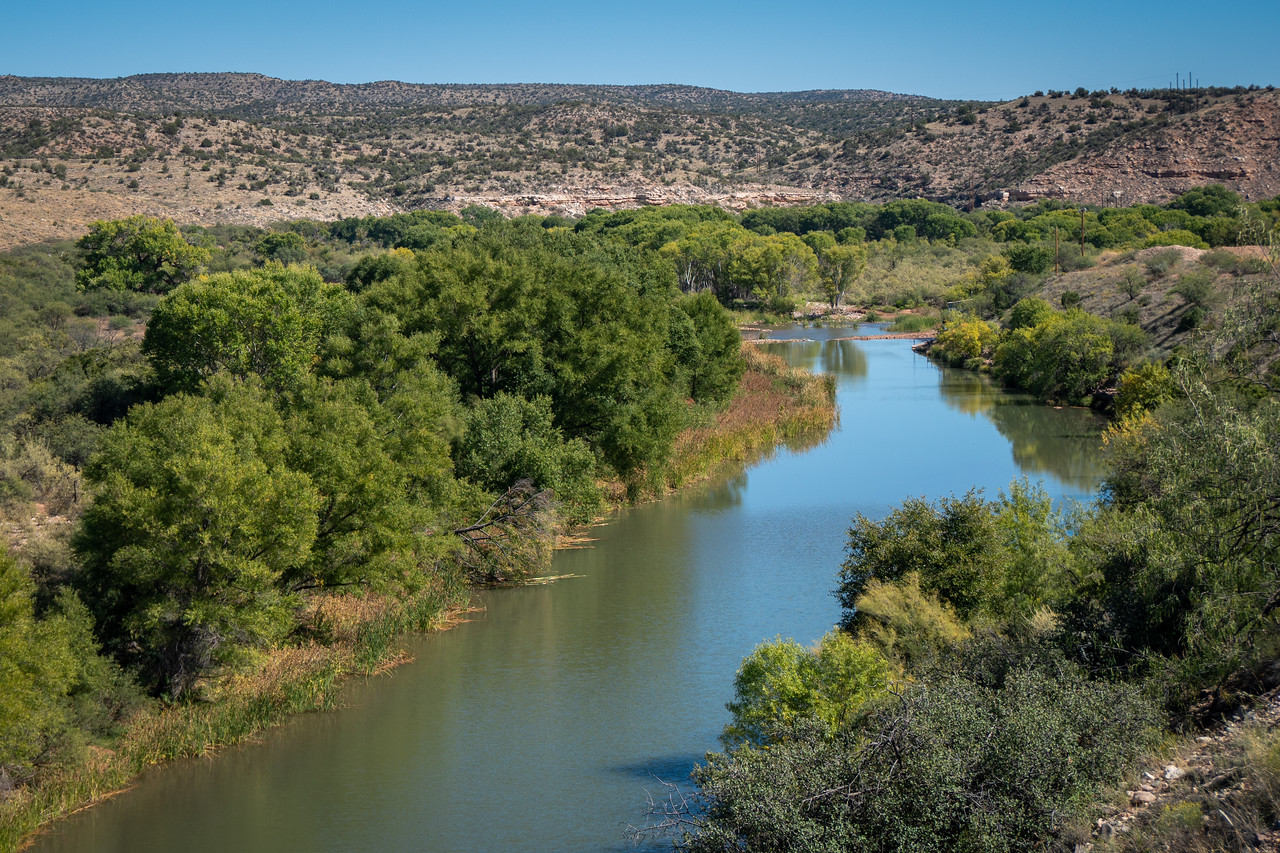 The Verde River running flowing beside the railway tracks as we climbed up Verde Canyon.

I live in Southern California, a land without water, which means I miss seeing a river. The Verde was a treat.  I expected Arizona to be dry and barren.  The Verde Valley and Sedona area surprised me.  There were a lot of trees!

Now don’t get too complacent.  I did see cactus and rocks.  The higher we climbed, the more the cliffs loomed over us. 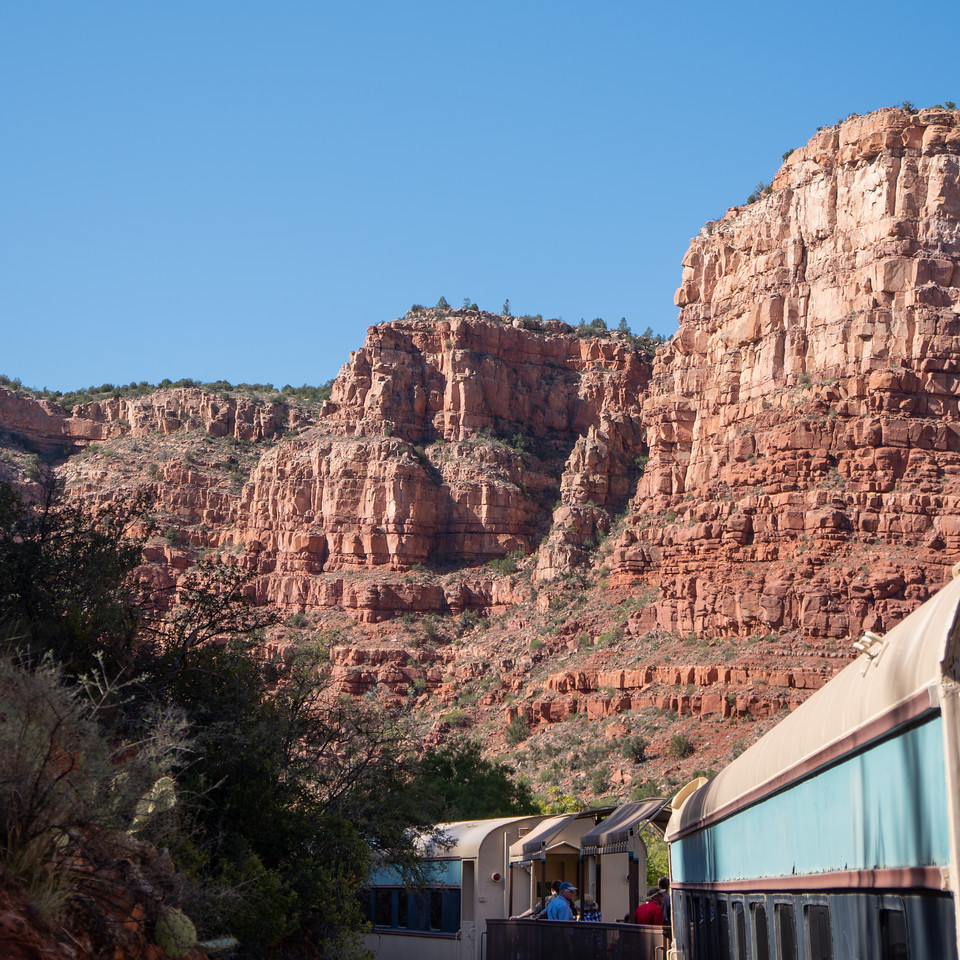 The train rounding a bend as Verde Canyon takes shape above it.

I’m not a geologist, but I believe our guide mentioned that the area was once volcanic.  The cliffs consist of basalt and sandstone.  I find the geometric blockiness of them interesting.

The track was initially built in 1912 to carry copper from the mine to nearby Jerome.  Although the copper mines no longer use the line, the heritage railroad now finds new wealth in tourism. Today, the train is the only way into the canyon; there aren’t any roads.

As I mentioned above, there are several small bridges and a few dark tunnels.

Although I tried to get a photo of the train entering the tunnel, almost every attempt was thwarted by an arm and phone blocking my shot.  The above photo was literally a shot in the dark.

As to bridges, my favorite bridge is the big iron truss affair near Perkinsville.  Knowing how difficult it would be to get a photo of our approach, I opted instead to take a picture while we crossed. 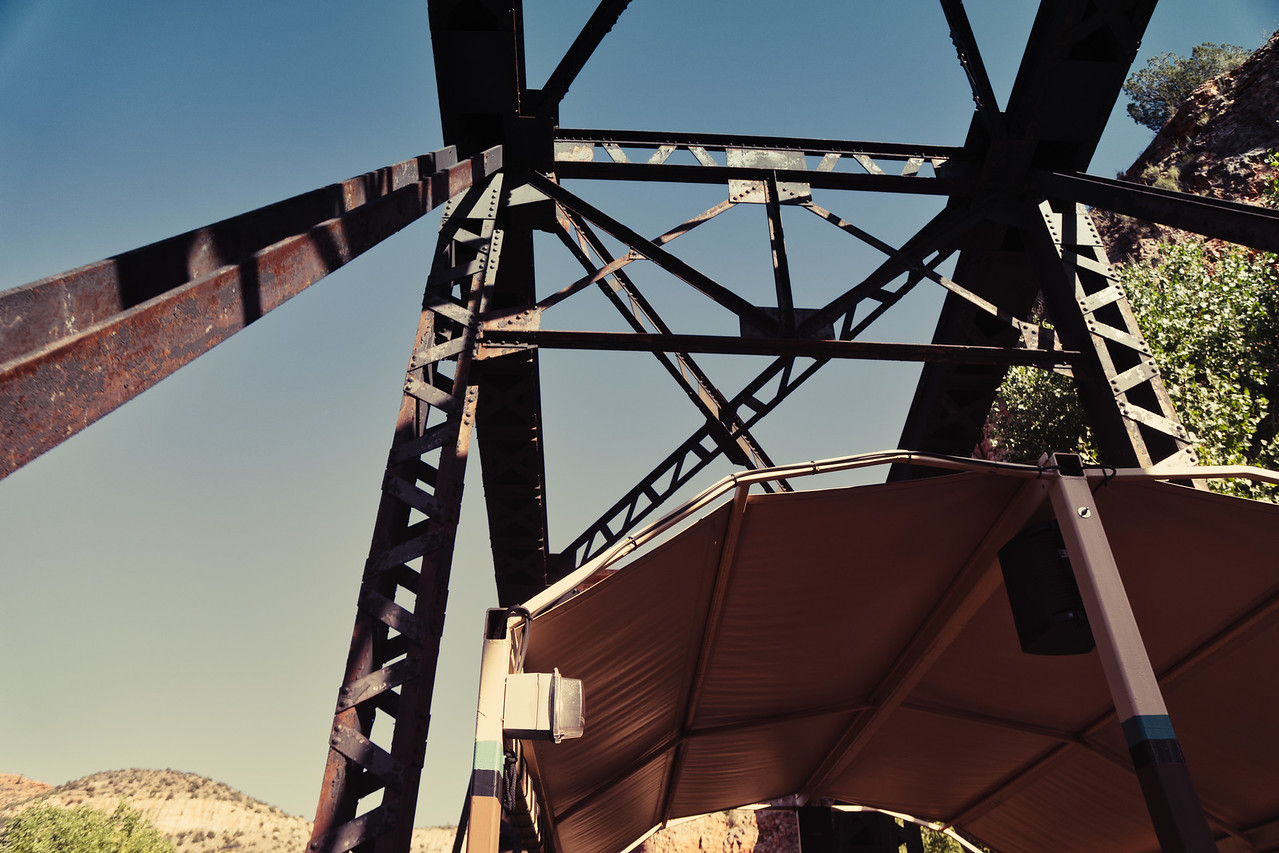 To see more images from my trip into the Verde Canyon, please click here.